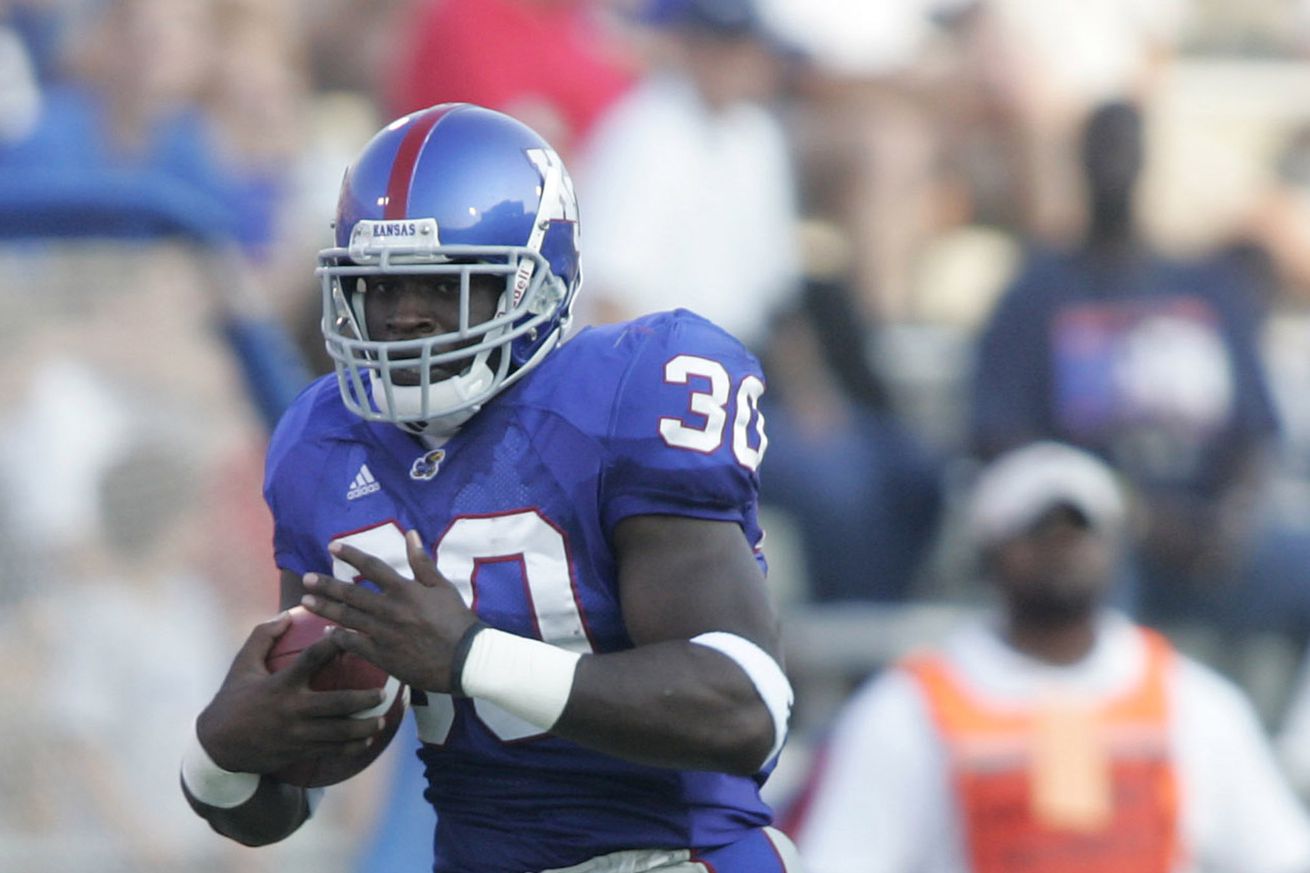 A breakdown of one of the biggest workhorses in recent Jayhawk history.

Reading through old articles written during Green’s time at KU, his game very much matched his personality. A word that popped up a lot was “underappreciated,” which was coupled with repeating anecdotes about how quiet Green was when interacting with the media.

As Ryan Wood of the Lawrence Journal-World put it in 2005, “He has a lunchpail demeanor, refuses to pop his collar or thump his chest, and, while cordial to outsiders, honestly doesn’t have much to say to anybody about his individual achievements.”

Later in that article, Mark Mangino describes Clark as “…what you call a steady, workhorse kind of guy.”

This was definitely the case during Clark’s first two seasons at KU. In those two years, Clark carried it 401 times for 1,781 yards and 10 TDs and caught another 81 passes for 872 yards and 2 TDs. For comparison, that’s 58 more touches than Pooka Williams has received in his first two years in Lawrence.

Competition slowed down Green’s final two seasons. John Randle took on the majority of the carries in 2004—Green also battled some injuries late in the year—before being dismissed from the team, and Jon Cornish split carries with Green in 2005. Green’s receptions also dropped a bit, especially in 2004 (though Kansas had four different QBs with at least 40 attempts so consistency might have been challenging).

Still, there’s something to be said for his reliability and quantity of production. He is fourth all time in carries at 641 and he’s the only back in the top 20 in rushing to also catch 100 passes (Green had 122). Next closest is Jake Sharp at 86 receptions, a solid 36 behind.

The workhorse moniker given to Green throughout his career was well earned in this final game of his freshman season (though it resulted in a 55-20 loss ending a 2-10 year for Kansas). Green was responsible for half of the Jayhawks’ 427 yards of total offense as the leading rusher and second-leading receiver for KU.

Admittedly, Green, his subdued personality, and the fact that we’re digging nearly 20 years into the archives might not have been the best one to try this out on. But here we go anyway.

Heading into the 2004 season, Green was a quiet figure in a loaded backfield. He showed up heading into the season having gotten rid of his cornrows and instead showed up with a shaved head.

A story from media day as told in the LJ World:

“Green not only showed up to KU’s media day with his patented cornrows clipped in favor of a buzz cut but also presented a more vocal personality.

One reporter thanked Green after an interview but accidentally called him Gary, confusing Clark with freshman running back Gary Green II.

“I’m Clark, man,” said Green, whose voice might have grown louder, but he still flashed a warm smile.

I’m guessing defenses didn’t have much trouble remembering his name.