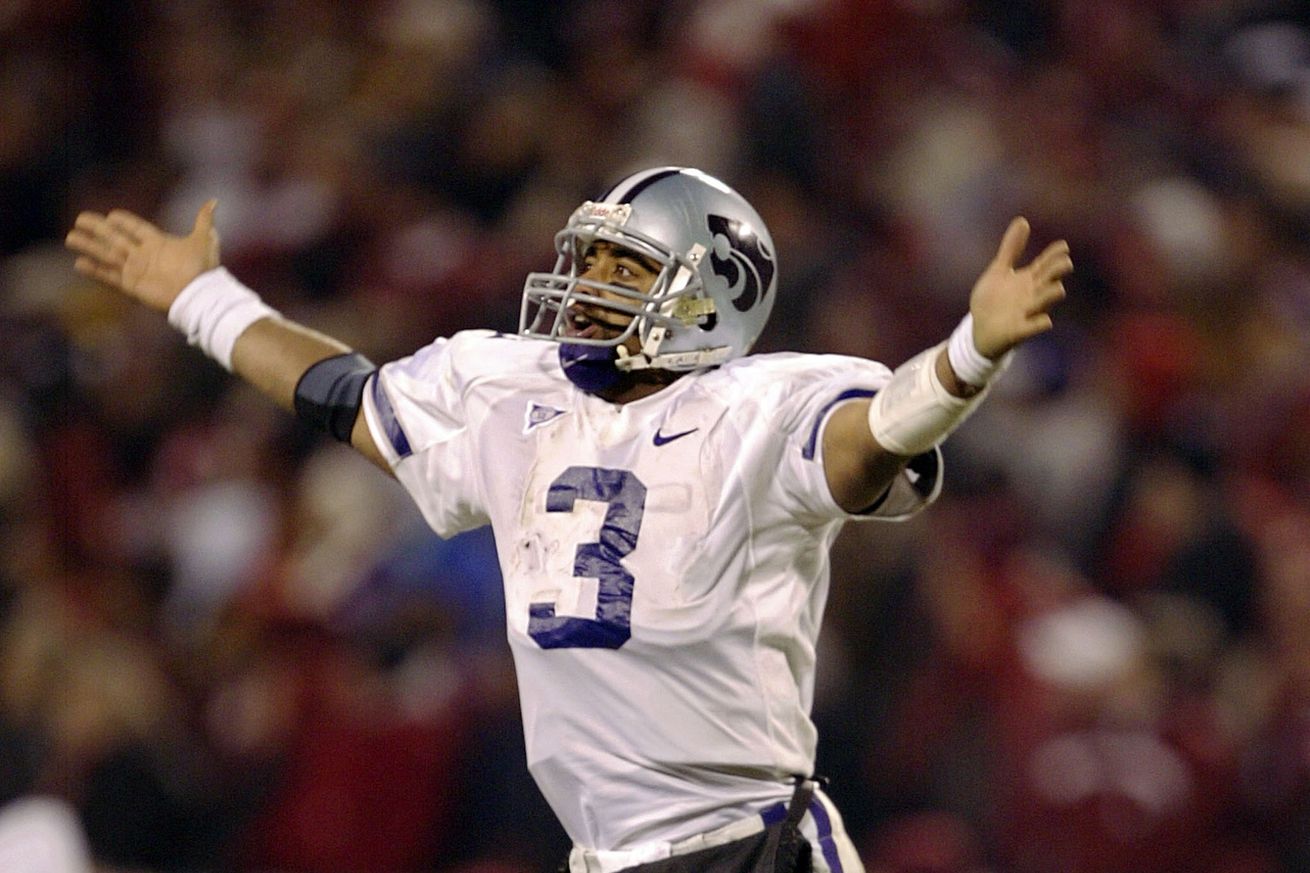 Ell Roberson and the Wildcats had us all jumping for joy on December 6, 2003. | Photo by Brian Bahr/Getty Images

Time to smile at old memories

With no live sports to watch, let’s get in the time machine that modern technology affords us and transport ourselves back to a happier moment—December 6, 2003.

Was 2003 really that long ago? Consider what was going on in the world:

We remember the rest, but we’re here to celebrate and relive that last one.

To set the scene, K-State began the year ranked No. 7 in the country and had muddled through an up-and-down 11-3 season that included beating California 42-28 in the BCA Classic at Arrowhead but losing to the Marshall Thundering Herd 27-20 to conclude the five-game non-conference slate. The Wildcats would go on to lose their next two games at Texas and Oklahoma State before getting healthy and winning six in a row, including a stadium-clearing 38-9 road shellacking of Nebraska, to conclude the regular season.

Diminutive linebacker Josh Buhl amassed 109 solo and 75 assisted tackles in 15 games, while Andrew Shull manned the defensive end, James McGill picked off six passes, and Rashad Washington did everything as a senior safety. The defense held teams to an average of 283 yards and 15.5 points per contest through the end of the regular season.

All of that excellence aside, their 11-3 record made them decided underdogs against No. 1 and undefeated Oklahoma in the Big 12 Championship game. OU had outscored its opponents by an average of 48-13. They had crushed Texas 65-13 and Texas A&M 77-0. College football analysts had already anointed OU, who had trailed only twice all season, as perhaps the best college football teams ever assembled. USA Today penned this headline: “Oklahoma: First Big 12, then history: Sooners could rank with all-time greats.”

But you all know what happened. The K-State defense frightened and shut down eventual Heisman winner Jason White. Darren Sproles went supernova for 323 yards from scrimmage (235 rushing, 88 receiving). Ted Sims sealed the game with a pick-6 and a victory lap in front of the OU bench. Purple Euphoria in Kansas City. Boomer Sooner finally silenced. K-State, finally champs.

While you wait for the simultaneous “kickoff” of the online watch party, you might also want to reread Derek Moeller-Smith’s fabulous longform piece: Ambushed: The night the greatest turnaround trumped the greatest team, which he published here in honor of the tenth anniversary of the game. If you have a subscription to The Athletic and love schadenfreude, check out Jason Kersey’s retrospective, Remembering the 2003 Oklahoma Sooners: The greatest team ever — until it wasn’t, which relives the disappointment from Oklahoma’s perspective. Here’s a taste:

“It haunts me to this day. I still think about it all the time. Time does not heal all wounds, I’ll tell you that.” – Ted Lehman, OU linebacker

The goal here is to get as many BOTC brothers and sisters as possible to watch the online broadcast at the same time, and to comment in the thread below as if the game is happening live. We don’t know how well this will work, but we all need hope for something right now. Even if we get out of snyc, keep commenting. Lots of great moments to celebrate in that game. I was fortunate enough to be there, and it was the most fun I’ve ever had at a sporting event. This should be fun, too.

Here is the link. https://www.youtube.com/watch?v=9DwzyszpTp0

Commercials have been mercifully purged, but the video still runs 2 hours and 40 minutes. Try to start at 7:00, and let’s fill up the comment thread.