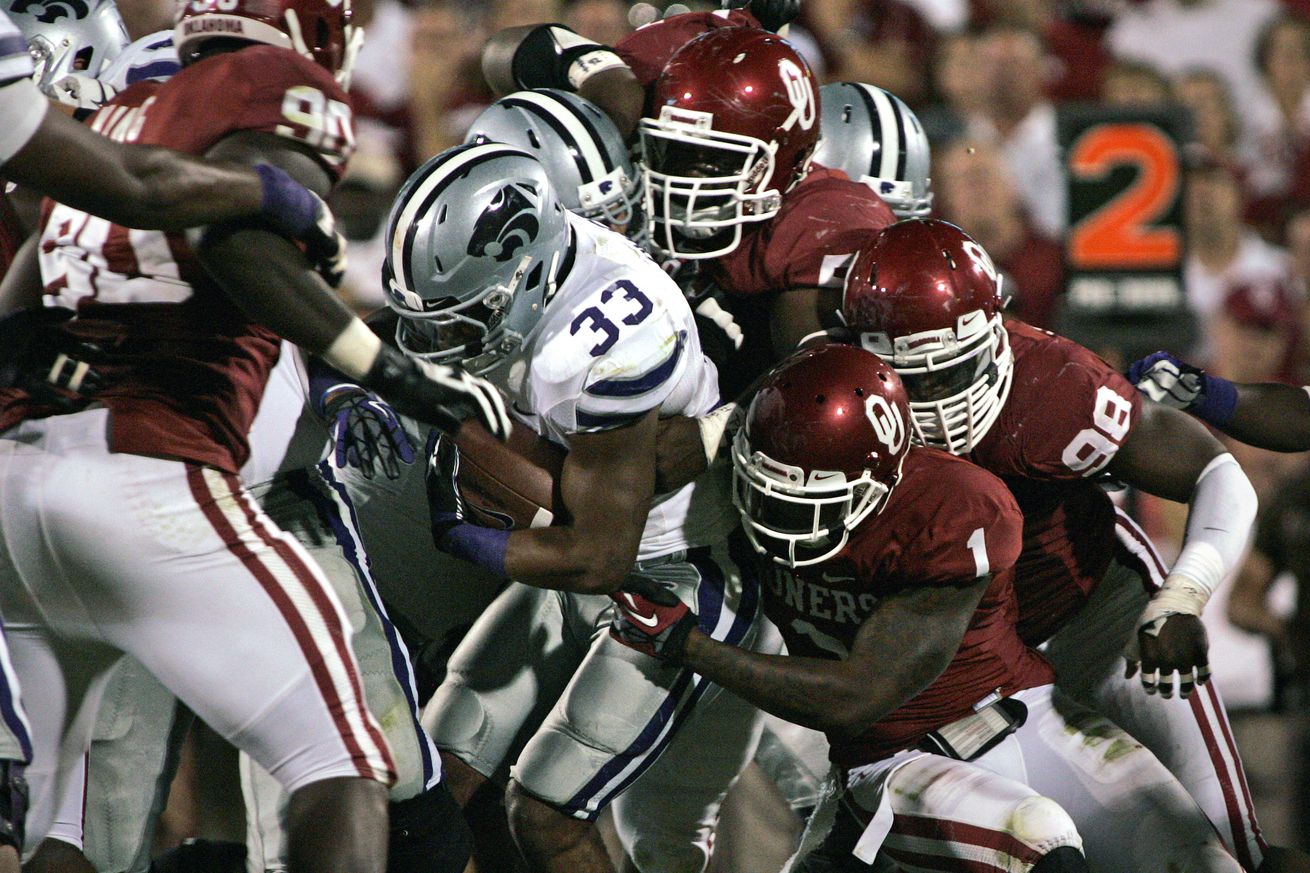 A whole mob of Sooners could not stop John Hubert in 2012. | Photo by Brett Deering/Getty Images

K-State fans remember 2012 as a special season that culminated with a Big 12 Championship. With Collin Klein at quarterback and much of the supporting cast returning from a surprising 2011 squad that had a knack for pulling out close games, it was only natural to think that the Wildcats would challenge for a championship. One giant roadblock in those plans was the Oklahoma Sooners.

In 2011, the No. 11 Sooners had crushed No. 10 K-State, 58-17, in Manhattan. Landry Jones had torched the Wildcat defense for a school-record 505 passing yards. The following week, K-State would wage a valiant battle against No. 3 Oklahoma State before stalling at the goal line to succumb to the Cowboys, 52-45. The Wildcats would go on to beat Texas A&M, Texas and Iowa State by a combined 10 points to finish the regular season at 10-2. After winning so many close games (and despite getting throttled by OU), K-State fans thought the Cats would be good in 2012. But how good?

The game at No. 6 Oklahoma confirmed that K-State would not only be good; it would challenge for a spot in the national championship game.

The Wildcats carried a No. 15 ranking into it first league contest on September 22. OU came into the game at No. 6. After the 41-point beating the Sooners had administered to K-State the previous season, and considering that Landry Jones returned to torment the Cats at quarterback and Bob Stoops had amassed a 78-3 home record during his coaching tenure in Norman, there was little optimism that K-State would leave Gaylord Family Oklahoma Memorial Stadium with a win.

K-State defied all those negative factors. Behind a stellar defensive effort spearheaded by Arthur Brown and Justin Tuggle and the steady, grinding quarterback play of Collin Klein and 130 ground yards from John Hubert, the Wildcats upset the Sooners 24-19 to set the team on the course for a special season.

The Cats would rise all the way to the top spot in the land before untimely injuries at key positions and poor play on the road at Baylor ended their national title aspirations. They put the pieces back together to beat Texas in the season’s final week to finish the regular season 11-1. They shared the Big 12 title with the Sooners.

We will gather at 1:00 to watch the 2012 Cats send OU fans home disappointed and K-State fans’ expectations into the stratosphere.

Watch Together thread is here: https://www.watch2gether.com/rooms/p7mhzkumn87eyixwwe?lang=en

For those who can’t make it this afternoon but want to watch the game later, here are the YouTube links: