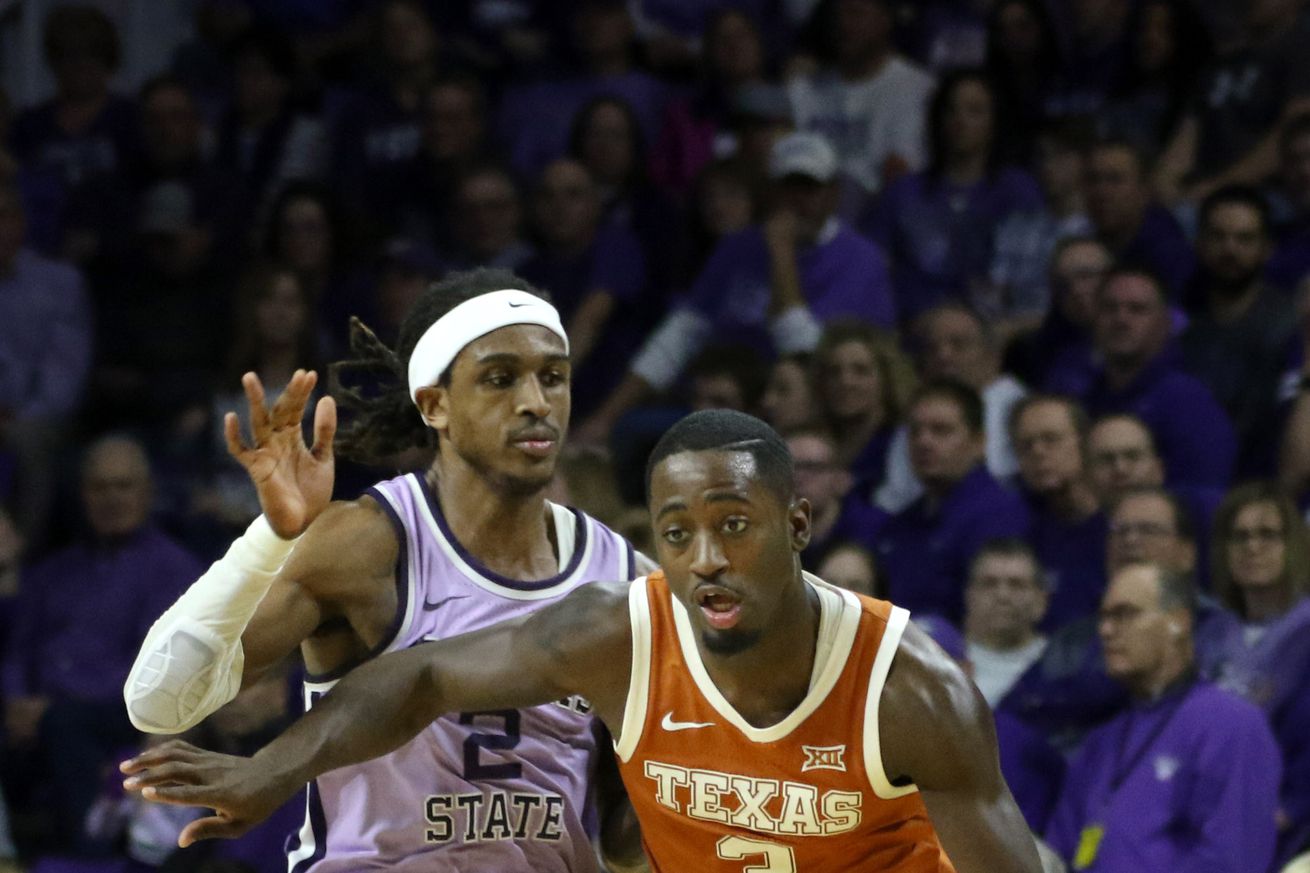 The throwback two-tones did not bring the Rolondo Blackman’s touch to any of the Wildcats. Texas’s Courtney Ramey had it, though. | Scott Sewell-USA TODAY Sports

Celebrate what you can, right?

K-State was without the services of Montavious Murphy, so Antonio Gordon, fresh off his hot finish against Texas Tech, started in his place. A-Go scored one point and grabbed nine rebounds in 24 minutes of playing time. Xaiver Sneed led the team in scoring, with 15 points. He was 3-12 from the floor and 8-11 from the free throw line. Makol Mawien scored 14 and led the team with 10 rebounds.

Cartier Diarra, had seven points at the half, but finished with only nine. He also contributed six assists and four steals, and was guilty of only two turnovers.

Texas played without Jericho Sims, and the Wildcats took advantage, tallying 19 offensive rebounds in the game. But they only converted those second chances to 12 points, owing largely to their 20-58 (34.5%) shooting total (which, frankly, was bolstered late, when the game was out of reach). As further proof that nobody can be depended upon to make a shot consistently, the Cats hit only 3 of 14 (21.4%) from outside and 16-29 (55.2%) from the free throw line. If you can’t make the freebies, you probably shouldn’t expect to make many of the contested ones.

The Cats out-rebounded Texas 41-28, overall. All other secondary statistics were fairly close, except Texas had seven blocks to K-State’s none, and Texas made 23 of its 44 shots (52.3%). (That’s right; K-State had 14 more field goal attempts, yet still lost by double digits.) The Longhorns were 16-21 from the free throw line.

For Texas, Courtney Ramey found himself open repeatedly in the first half, and after nailing a three-pointer over Pierson McAtee before the horn, he went to the break with 21 points. He did K-State the favor of missing a few in the second half, but he still led all scorers with 26. Andrew Jones and Matt Coleman III had 12 each.

Jeff Mittie and his women’s team found themselves in familiar territory, down late and needing a surge to steal the win. They were unable to do it midweek at home against TCU, but a 7-2 K-State run erased a five-point deficit to tie the game at 52 with 4:59 to play.

Jumpers by Angela Harris and Ayoka Lee gave K-State a 57-54 advantage with less than 1:30 to play, and Peyton Williams made three of four free throws to ice the win. The Wildcats finished on an 8-0 run.

Lee collected yet another double-double, with 18 points and 10 rebounds. Angela Harris recovered from here abysmal midweek performance to contribute 15 points, including three huge 3-pointers. Williams just missed her own double-double, scoring nine and hauling in 13 rebounds.