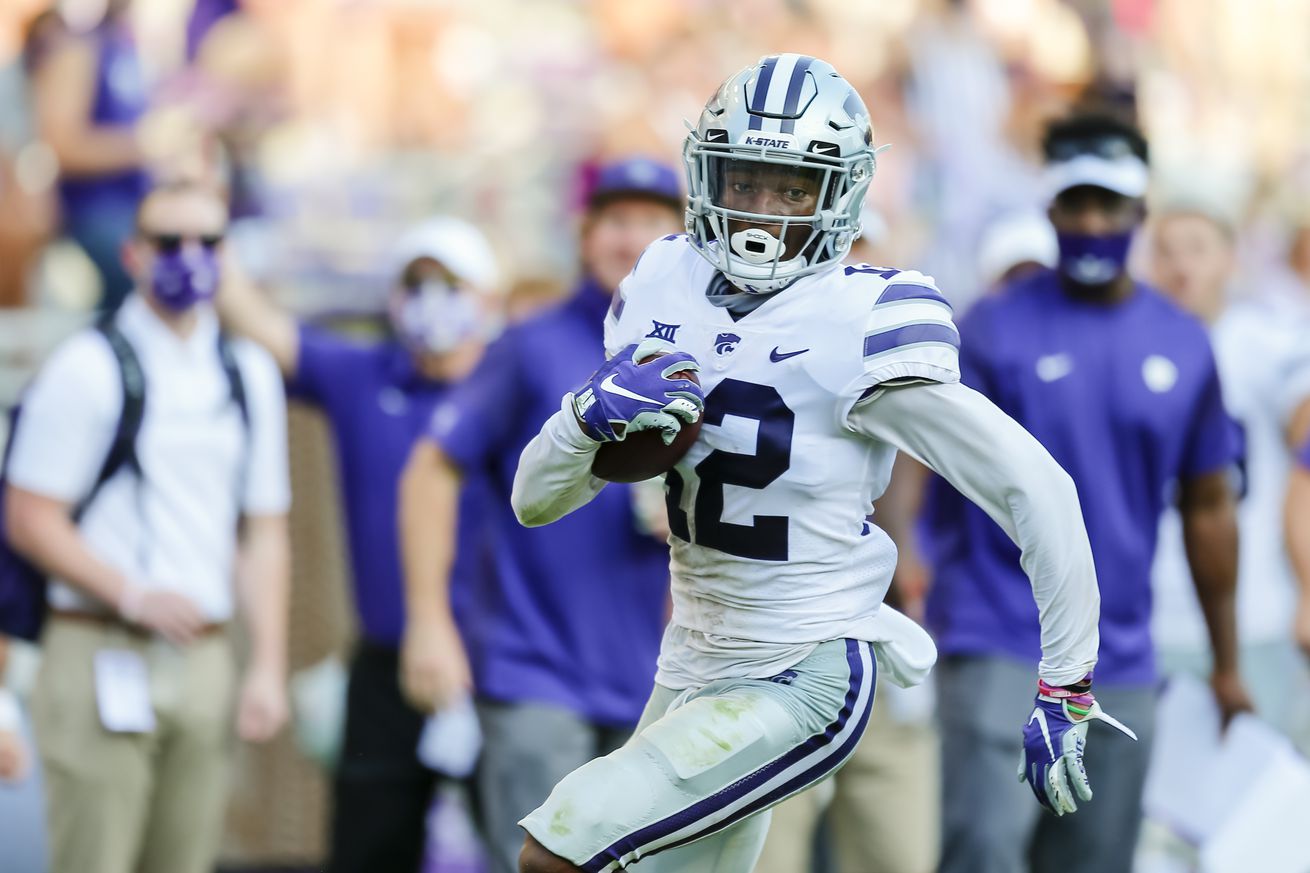 Parker has shined this year. | Photo by Matthew Pearce/Icon Sportswire via Getty Images

After four years of meh, K-State volleyball is back in the rankings and facing top-ranked Texas. Plus, AJ Parker honored, cross country and soccer.

It’s a bye week for your No. 22 Kansas State Wildcats, but that did not stop K-State’s weekly barrage of personal honors to carry on as senior defensive back AJ Parker was named the Jim Thorpe Award Player of the Week. Parker earned Big 12 Defensive Player of the Week honors earlier this week.

Parker is coming off a strong performance in K-State’s 24-17 win at TCU where he grabbed the Wildcats’ first pick-six since Duke Shelley took one back to the house in 2017. Parker has had a really solid season after being moved over to nickelback and ranks 15th-nationally in career interceptions with six.

Speaking of ranked K-State teams, the Volleycats (3-1) are back in the national spotlight after three straight series wins. That has bumped them up to 13th in this week’s poll, with their biggest test on the horizon. The Wildcats will host No. 1 Texas (6-0) in Bramlage for a two-match series starting Friday night.

The ranking is K-State’s first since 2016 after a series of really up-and-down years for head coach Suzie Fritz’s team.

The teams will play a nationally televised match on ESPN2 starting at 4 p.m. on Friday before returning on Saturday to play at 6:30 p.m. on ESPN+.

This is a young and vibrant team that deserves to have as many of the purple faithful supporting them whether in the reduced capacity crowd in Bramlage or on TV. If you’re not going to be able to make it to Manhattan to watch a match this year, Friday evening may be your best shot to get a good look at what could be the start of something really special.

The long distance crew for K-State is wrapping up the regular season portion of the cross country schedule on Saturday at the OSU Invite. It marks the second straight week that they’ve traveled to Stillwater for a race.

The Wildcat runners will end the season at the end of the month when they head to Lawrence for the Big 12 Championship at Rim Rock Farm on Oct. 30.

After starting the season 0-4 K-State women’s soccer may have their best chance to get off their losing skid on Friday when they host winless Oklahoma (0-2-1) at Buser Family Park.

The Wildcats have yet to beat the Sooners but they are coming off a narrow 3-2 overtime defeat last season so there’s no better time like the present to get that elusive first win of both the season and the overall series.

K-State roster is full of talent from the state of Oklahoma, with seven current players calling the Sooner State home, so you’d have to think that a match-up with the Crimson and Cream would add some extra motivation.

Things will get started this evening at 5 p.m.