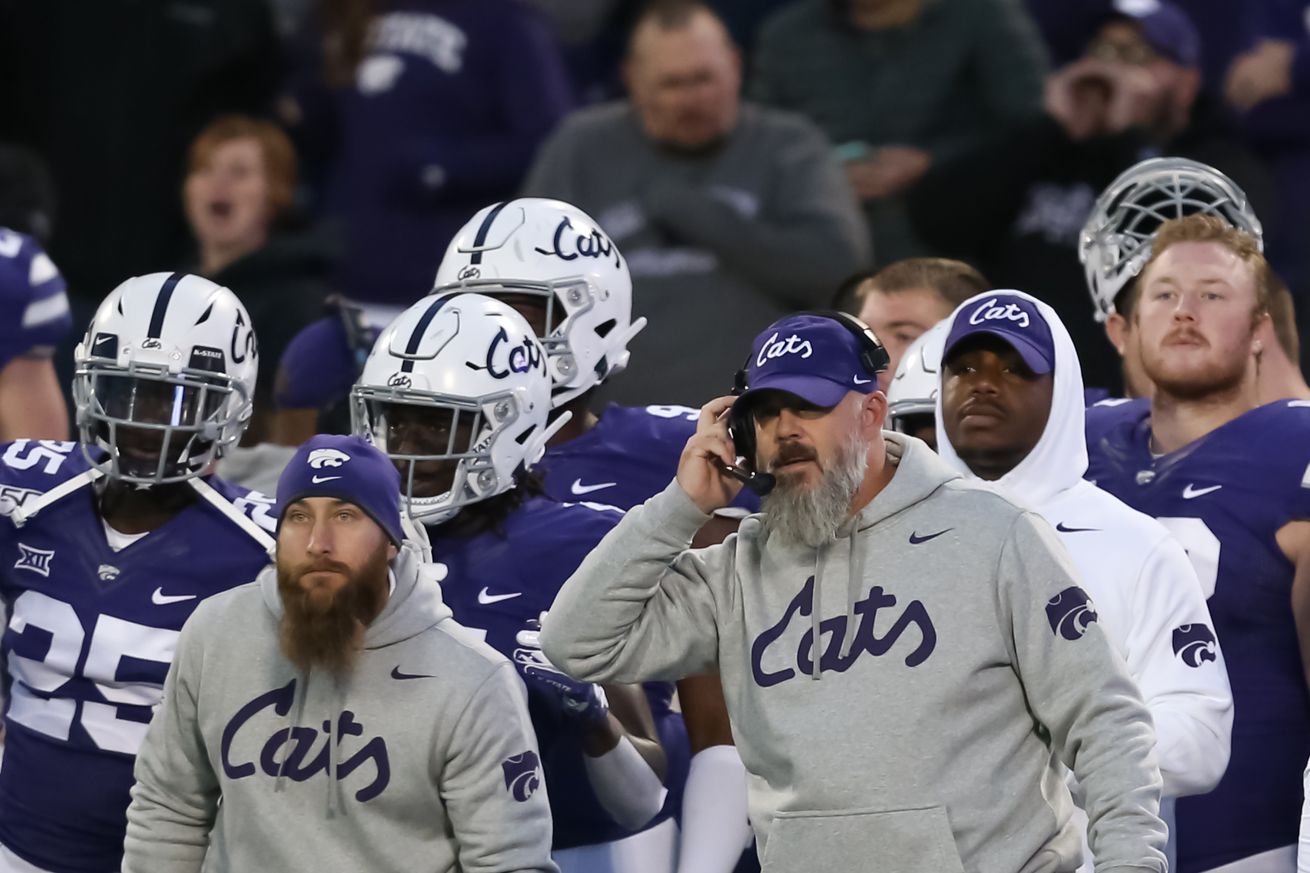 This is terrible. | Photo by Scott Winters/Icon Sportswire via Getty Images

The big news swirling at Kansas State yesterday and this morning: as initially reported by GPC’s Riley Gates and later confirmed via his own sources by Kellis Robinett of the Eagle, Scottie Hazelton has been offered a huge paycheck to take the defensive coordinator position at Michigan State.

Hazelton took over a somewhat bare cupboard last spring and led the Wildcat defense to an amazing 202 yards per game against the pass. That was a notable improvement over previous seasons, although it came at the price of a nearly sieve-like ability to stop the run. Still, the combined result was a net plus for K-State, which finished second in the Big 12 in scoring defense, and ultimately that’s the number that matters.

This will mean Chris Klieman has to hire a defensive coordinator for the third time since taking over for Bill Snyder last winter. His initial hire, Ted Monachino, was snatched away by the Chicago Bears, which resulted in Hazelton’s late hire in February 2019.

Hey! You wanna actually WATCH a track meet involving your Wildcats? You can today and tomorrow, as the Big 12 Indoor Track and Field Championships will be on ESPN+ (you can sign up here). The action is already under way in Ames, and will continue through tomorrow.

On the men’s side, Pierson McAtee and Cartier Diarra were named to the Academic All-Big 12 first team yesterday, with Mike McGuirl getting a second-team nod.

As for the women, they’ll face a daunting task tomorrow night in Waco as they face the #2 Baylor Bears at 6:00. That’s the 25-1 Baylor Bears, who haven’t lost a Big 12 game all season and who beat the Wildcats by 14 at Bramlage 20 days ago. This game will also be on ESPN+.

The newly-renovated Tointon Family Stadium will be on display this weekend as the Wildcats open their home season with a three-game series against Fairleigh Dickinson. The first two games will be today, with a 2:00pm first pitch for game one followed by game two 30 minutes after game one’s conclusion. The series will wrap tomorrow at 4:00. All three games will air on, you guessed it, ESPN+.

NOT on ESPN+: the women’s tennis team (6-4 and now ranked #38 in the ITA rankings) will begin a long, long homestand today as they face SMU at 11:00am at the Mike Goss Tennis Stadium. The Cats won’t leave Manhattan again until March 27, so it’s a good time to climb those rankings.

The spring season is upon us, and the Wildcat crews will be in Oklahoma City tomorrow for a scrimmage against the Sooners. Somehow, Corbin McGuire’s shambling corpse is still cranking out Sports Extra features; today, he checks in with Mattie Warner and Taylor Hartman — who both happened to sort of be his co-workers as they’ve been interning in the K-State Athletics communications office as graphic designers.

Worried about the coronavirus? It’s okay, K-State is here to save you. Per KSHB-TV 41 in Kansas City, K-State has been given a grant to research and develop antivirals for MERS and COVID-19.