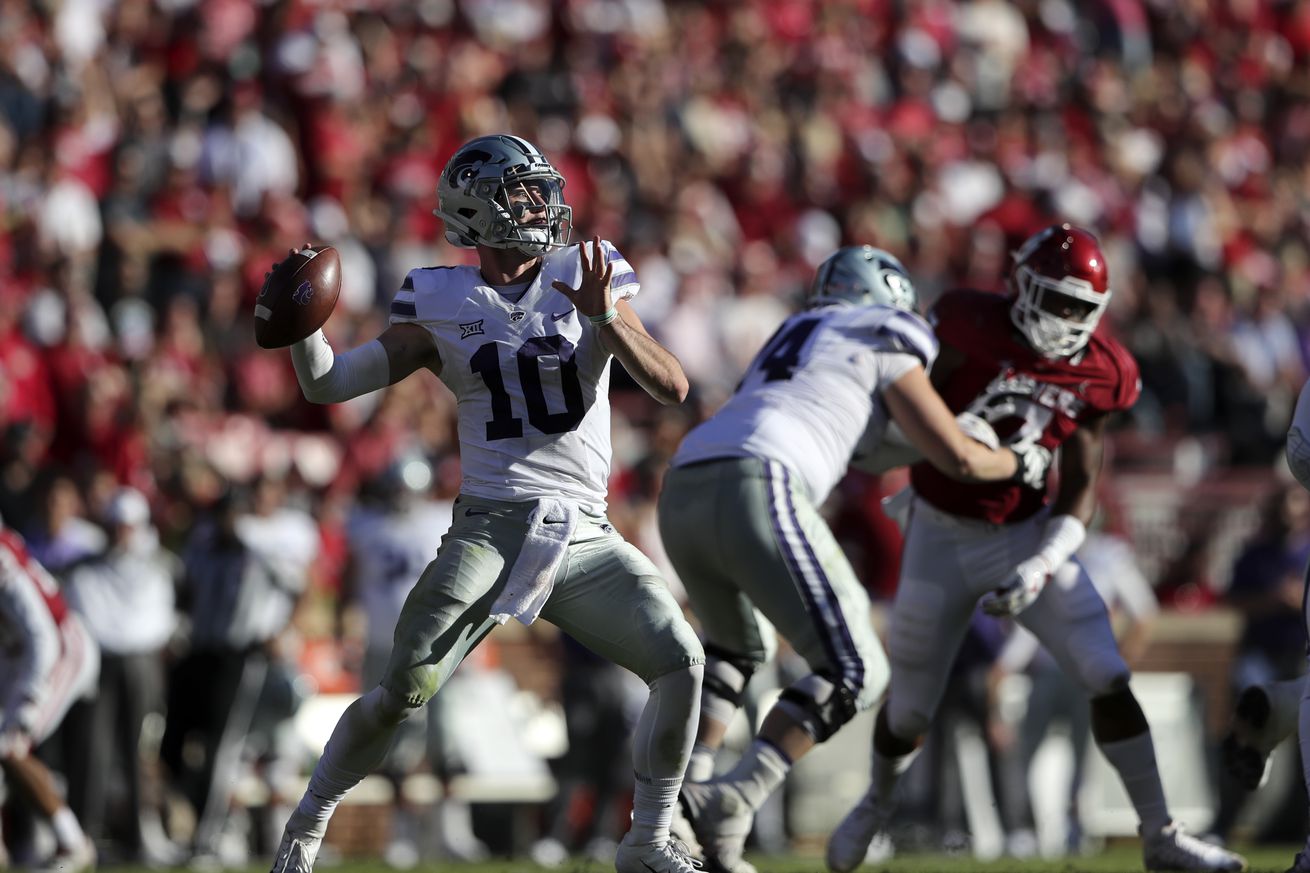 Last year, Skylar Thompson and the Wildcats pulled off a win some called a miracle. Now, at least one staffer believe it will take a miracle just to play Saturday’s rematch. | Kevin Jairaj-USA TODAY Sports

After a lackluster performance in the opener against Arkansas State raised questions about K-State’s ability to compete this season, virus testing is beginning to raise questions about whether the team will even be able to play this week.

The team is preparing to play the Oklahoma Sooners Saturday in Norman, but we may want to anticipate COVID-19 scuttling those best-laid plans. The Tulsa World reports the Wildcats are cautiously optimistic about playing the game. As of Monday, the team would have met the Big 12 thresholds for the game to proceed; but rounds of testing on Wednesday and Friday could change that. FanSided, citing a Dean Blevins tweet, casts even deeper doubt, reporting that an anonymous K-State staffer said: “Ain’t gonna be a game, have to be a miracle.” Moral of the story: If you were counting on watching the game, you might want to explore alternate means of occupying your Saturday, just in case.

Most prognosticators don’t expect much of a game, anyway. OU is a 28.5-point favorite over the ‘Cats. What was the spread last year, again? The athletic department posted its usual Tuesday game-week preview, including a look back at that improbable upset of the Sooners in Manhattan, K-State’s first win over a top-5 team in 13 years.

The Big 12 home opener against Texas Tech (if it takes place) will kick off at 2:30 and be televised on FS1.

In an interview on @TheGameKMAN, Athletic Director Gene Taylor said K-State had lost some season ticket holders over the Black Lives Matter patches on the football team’s jerseys. Obviously, discussions about the racial divide must continue.

K-State AD Gene Taylor tells us on @TheGameKMAN that K-State lost season ticket holders over the Black Lives Matter patches on the jerseys they wore against Arkansas State, and K-State is still “working through” what the financial impact of the blowback will be. pic.twitter.com/s4Tw2V17hT

COVID has struck the soccer squad again, as Friday’s scheduled tilt against TCU had to be postponed to an undetermined date. No word on which squad’s testing necessitated the delay.

In K-State Sports Extra, Austin Siegel pumps up the expectations for K-State volleyball, as Suzie Fritz’s team tries to set itself on the right course behind a dozen freshmen and sophomores.

Finally, if you subscribe to The Athletic (and if you love sports and quality sports writing, it’s worth the five bucks per month), you really should read CJ Moore’s in-depth preview of Bruce Weber’s almost-all-new K-State basketball roster. Good stuff.