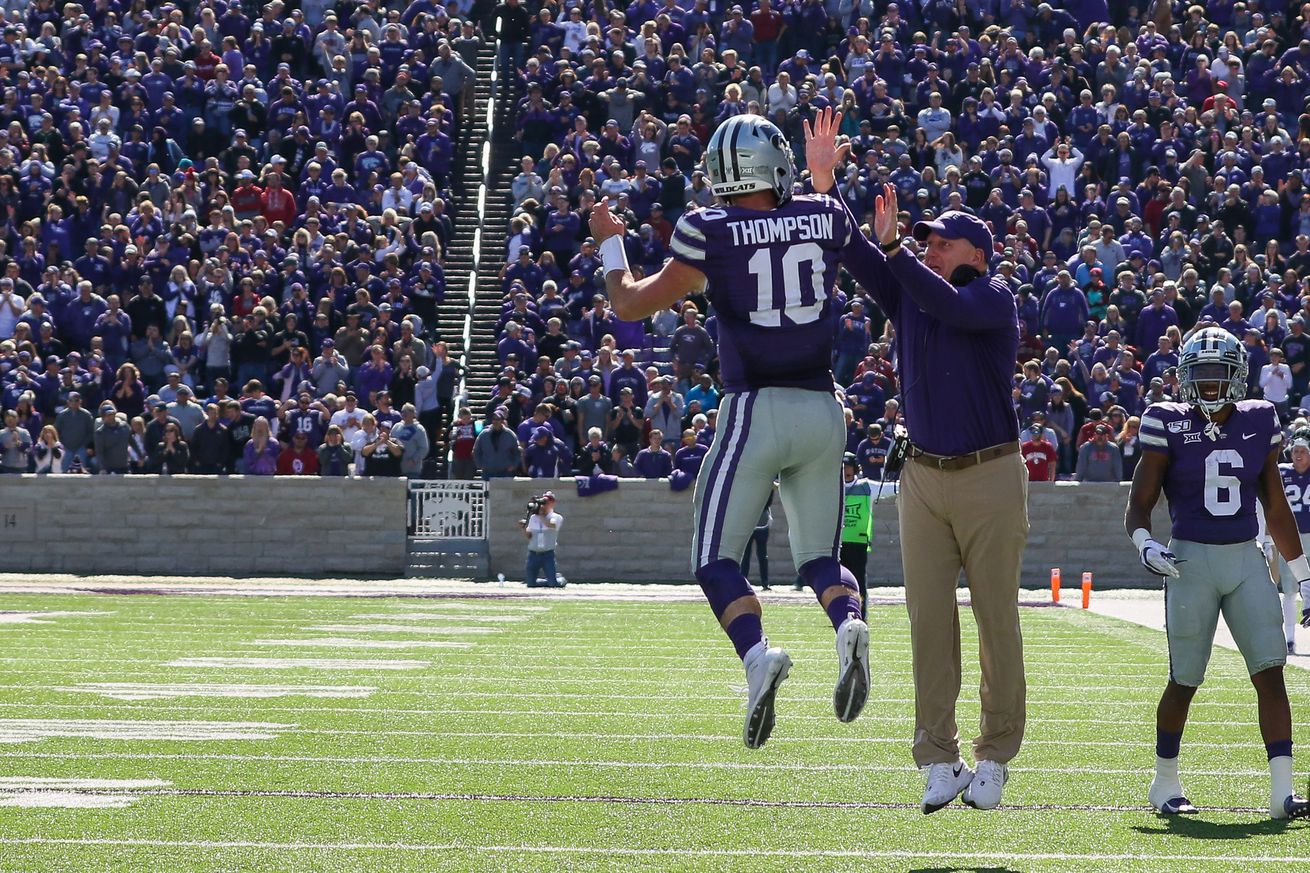 I’m excited to announce I am committed to Kansas State University!! #EMAW pic.twitter.com/CoqDPf0TDi

The Wildcats offered Jackson on April, 3rd of this year and managed to beat out both Arizona and Arizona State for the coveted Arizona athlete. In total Jackson has 15 listed offers, besides the aforementioned in-state schools, Iowa State, BYU, Boston College, Boise State, Virginia, Pittsburgh, Army, and Navy were his other offers of note.

I’m not going to lie, this one came out of left field. Jackson has long been considered a heavy Arizona State lean, so much so that I filed him away in the “maybe I’ll get to watch him play a late night game at some point in the future” portion of my brain. I’m not sure what changed for Jackson, but I’m thrilled that it did.

The coaching staff is on absolute fire in recruiting. The Wildcats are beating out high profile schools to secure impressive talent.

What He Brings to the Table

In high school, Jackson is a long striding, hard hitting menace in the back end of the defense.

He finds the ball well in the air and closes ground absurdly fast with his long legs, gobbling up passes that look open when the quarterback throws the ball. When he’s not busy making the opposing quarterback shake his head and spit out his mouth guard in disgust, he’s laying out receivers on short crossing routes and closing down running lanes. I look at his film, and see a player with a unique skill set that is probably undervalued as a recruit because evaluators aren’t sure what position he plays at the next level.

I know the natural inclination is to put him as a linebacker, and that may be where he ends up, but he reminds me of (get ready for another Clemson reference) Jayron Kearse coming out of high school.

Kearse was a 6’4, 195 pound athlete out of Ft. Myers, Florida that most people assumed would end up as a linebacker for Clemson. Instead, he stuck with his high school position of safety, giving the Tigers an intimidating presence on the back end of the defense. He’s gone one to carve out a solid NFL career with the Vikings and now the Lions.

I pulled up Jayron’s senior highlights, and they solidified my confidence in this comparison.

Ignore his wide receiver and wildcat QB highlights and focus on his work as a free safety. To my somewhat trained eye, he and Jackson look like similar freakish athletes in the back end of the defense.

In the current world of back shoulder throws and sideline jump balls, having a 6’5 safety has distinct advantages. I won’t lie, the idea of pairing Jackson with fellow 2021 recruit Mathew Langlois in the back-end of the Wildcat defense gives me heart palpitations. Jackson’s physical, long striding style paired with Langlois’s short area burst and agility seems like an ideal duo.

If Jackson does end up at linebacker, that works as well. He’ll need to bulk up some, but would make an ideal nickel linebacker. Most teams play a majority of the game with 2 linebackers on the field because of modern spread offenses. Having a linebacker that can match up with tight ends or occasionally slide into the slot gives the defensive coordinator room to be creative.

The defensive staff will have some decisions to make, and that’s a good thing.

What It Means for Recruiting

First off, it means the Kansas State staff is knocking this class out of the park. Closing on Langlois, Leingang, Hoffler, and Jackson in the last month was probably not something even the coaching staff anticipated. This is the absolute best case scenario for Klienman and crew and announces their presence as a player on the national recruiting scene. The above mentioned 4 players had legitimate offers from schools like Minnesota, Stanford, Arizona, Arizona State, and Mississippi State, and chose to come to Manhattan, Kansas instead. A few years ago, landing any of these 4 guys would be a stretch, and landing all 4 wouldn’t be a consideration. They are a step below elite recruit status, but it’s a small step. If any of the above 4 players hit the physical measurables recruiting services covet, they would be fringe 4* players (in my humble opinion).

Jackson’s commitment does put me in a bit of bind, because I anticipated another 2 linebackers and at least one more defensive back in this class. Since I’m not sure where Jackson ends up, I’m not sure who to take off the board. Throw in the fact that I have no idea how the eligibility freeze is going to work in terms of recruiting and I’m a bit lost at the moment.

Nick Martin, an athlete/linebacker out of Texarakana, Texas is still in play and it looks to be a battle between the Wildcats and Red Raiders for his services. Al Ashford III is a tall corner out of Colorado the staff would like to add to the secondary, but it will be tough to pull him away from his home state Buffaloes. Myles Purchase is a defensive back (and teammate of Ashford) that still has K-State in the running and would be a nice addition as well.

Then there is Ma’a Gaoteote, a 4* stud linebacker out of high school powerhouse St. John Boscoe, who is currently committed to USC. Mike Tuiasosopo has broken out the crow bar and is furiously trying to pry him away from the Trojans. It’s a long shot, but a long shot is better than no shot.

Any of those 4 players would be a welcome addition, but the way things have been going, I wouldn’t be shocked if another prospect I had previously written off surprises me.

This is fun y’all.