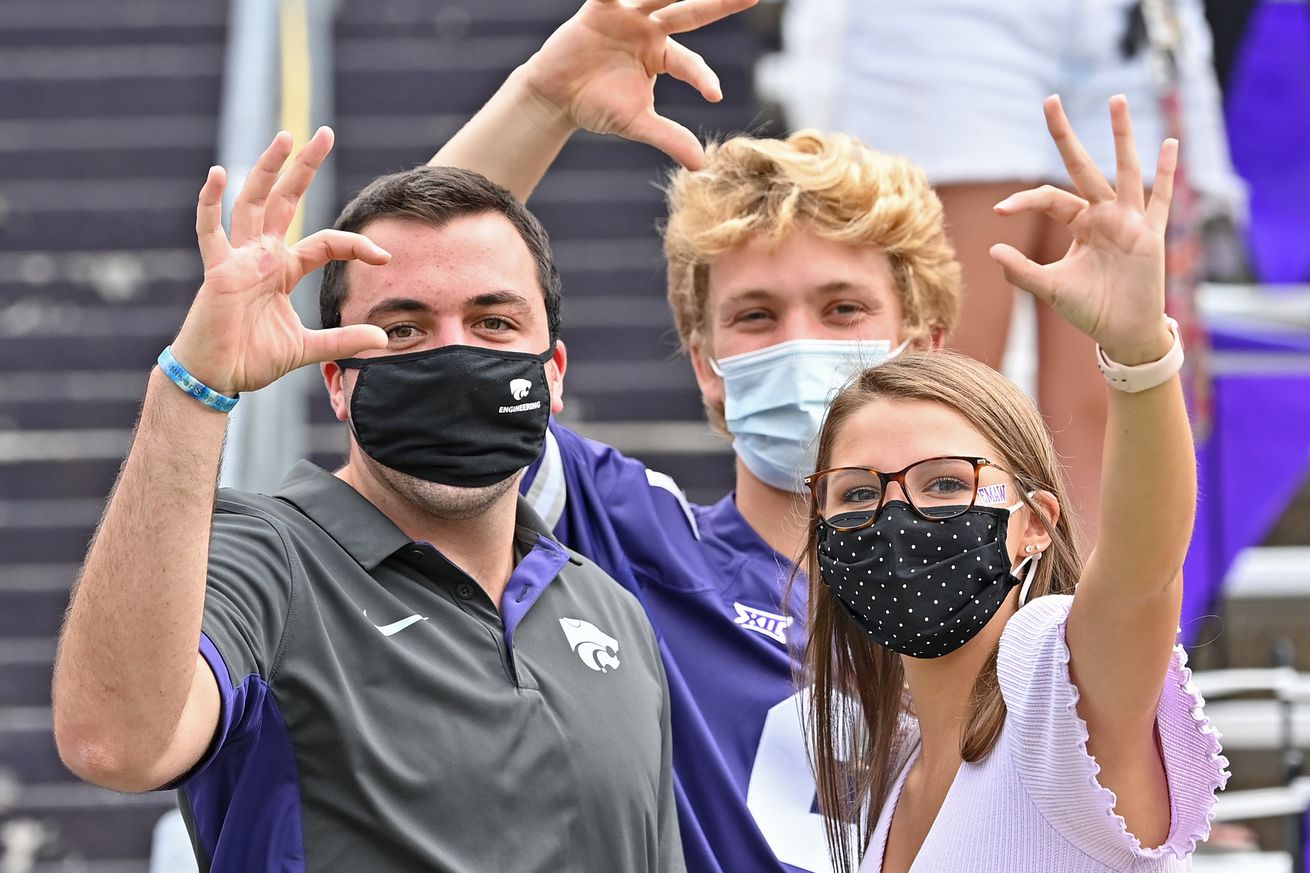 Let’s all sit back and enjoy the fact that we can watch football on Saturday.

I’ve been mulling over my thoughts on Kansas State football all week.

On one hand, football is football. Line up the guys you’ve got and get it done.

On the other hand, this season may be the worst case scenario for a program like K-State.

I’ve come to the conclusion that the 2020 Kansas State football season should be viewed as an exhibition and not an official season. The fact that no one is using a year of eligibility further cements this idea in my mind. Of course you want the guys to go out and try to win every game, but I’m not sure you can hold anyone responsible if they don’t. This was a thin team going into the season, and depth is the name of the game in 2020.

K-State is battling through two key problems this season.

The first problem is the second year roster hangover. I thought Coach Klieman and the Wildcats might be able to avoid this fate if everything went according to plan, but everything, as you know, has gone sideways.

The second problem is obviously Covid-19, which continues to wreak havoc on both practice and player availability.

When I say “roster hangover” I’m talking about a group of senior players who hung around a somewhat struggling program as starters graduating and there being a gap between that senior group and their presumptive replacements because of poor recruiting and roster attrition under a previous regime.

Things aren’t that bad with the Wildcats, but a few position groups are in deep trouble this year.

First and foremost, offensive line is going to be a problem.

Talent wise, I think this unit is better than the 2019 line, but as we saw against Arkansas State, it’s paper thin. The 2019 offensive line featured five redshirt seniors and those five guys plus Josh Rivas soaked up the vast majority of snaps. The good news is the 2019 offensive line managed to avoid any major injuries, the bad news is that the reserves were extremely young and didn’t log many minutes.

You’ll run into the occasional early contributor like Scott Frantz and Josh Rivas, but in general, you’re looking for guys to come into their own in their 4th and 5th years in the program.

This season, there are no redshirt seniors, or regular seniors for that matter. The only two guys that follow the normal progression are guards Rivas and Ben Adler, and Adler should probably be in a rotation instead of being a full time starter after logging only three games last season.

The tackle position is going to be a huge issue. Kaitori Leveston has NFL potential, and talent wise, he’s ahead of the curve, but in a perfect world, he’s a right tackle this season. Left tackle is a tough spot to break in a new player, and Leveston only has four games under his belt. He’s a massive human being, and an incredible athlete for his size, but he’s still raw in terms of technique, and right tackle would be the perfect place to accent his brawling, physical style, while allowing him to work out the kinks in his pass protection technique. After a year as a starting right tackle, he would be more prepared to play left tackle.

Right tackle, as we saw against Arkansas State, is a mess.

Yes, Christian Duffie was out, and it’s possible that he makes a big difference, but it’s my understanding that the right tackle spot was up for grabs until the end of camp. Even if Duffie were healthy, he’s another guy trying to beat the curve. He’s a redshirt sophomore with three games under his belt being asked to make the jump to full time starter.

Cooper Beebe is in an even tougher spot. I’m not going to sugar coat it, he was bad in pass protection against Arkansas State and the Red Wolves did everything they could with their scheme to attack him. In his defense, the recruiting services considered Beebe a defense tackle when he signed in the 2019 class. Last season he appeared in two games and he suddenly found himself at the top of the depth chart at right tackle in the 2020 opener. He’s a redshirt freshman, and should probably not be in the depth chart, or at least be a reserve at guard, this early in his career.

For the sake of time, I won’t go any further down the roster, so I can talk about why there is a hole.

There are 10 spots in the offensive line depth chart. The 2016, 2017, and 2018 recruiting classes account for only four of those spots. Everyone should thank the football gods that Noah Johnson decided to walk-on as a junior college transfer in 2019, otherwise the offensive line would be in total shambles. Roster attrition paired with recruiting misses and poor evaluations have the Wildcats scrambling to put together a coherent staring five, and as we saw in the first game, if two of those five are injured, things get ugly.

Offensive line is the hardest spot to make up ground at the level K-State recruits. There aren’t many 3-star guys that are prepared to come in and play in their first two seasons. Coach Klieman and Riley plugged one hole in the two deeps by bringing in Dawson Delforge, but sometimes it takes JuCo players a little while to acclimate to the D1 college game. You have Trevor Stange and Taylor Poitier in the 2019 class and Carver Willis, Witt Mitchum, and Sam Shields in the 2020 class but they were recruited with long term development in mind. They’re simply not ready yet, and that’s by design.

This season, the defensive tackle rotation has been to reduced to one experienced guy in Drew Wiley, and then a mix of inexperienced guys with minimal snaps under their belt (Jaylen Pickle and Eli Huggins) and 2020 junior college transfers (Derick Newton and Robert Hentz). That’s a massive drop off in experience, and much like the offensive line, it is directly tied to the fact that only three defensive tackles from the 2016, 17, and 18 recruiting classes are on the roster. In total, the Wildcats only have six scholarship defensive tackles on their roster (down to five with Matthew Pola-Mao opting out this season), and that includes two 2020 JuCo guys. Honestly, that’s recruiting malpractice by the Snyder regime.

I went over this last year, but the fact Coach Klieman arrived to Manhattan with exactly ZERO scholarship backs on the roster is amazing. It’s tough luck that Mike McCoy had to retire because of medical reasons, but the Snyder staff only recruited McCoy in 2016, Bernard Goodwater in 2017 (transfer) and Adam Davis (moved to linebacker) in 2018. I have no idea why a team predicated on running the ball didn’t recruit any running backs.

Coach Klieman hit town and immediately brought in two graduate transfers and four freshmen running backs in his initial 2019 class, but two opt-outs and whatever is going on with Jacardia Wright has put a huge dent in the running back depth chart. If the coaching staff had an extremely limited time machine, I think they would go back and grab another graduate transfer back for this season, but they had no way of predicting the carnage that is the running back position in 2020.

This is another paper thin position, and both the current and previous coaching staffs deserve part of the blame.

Coach Klieman found a safety position with only two players (Wayne Jones and Denzel Goolsby) over 200 pounds upon his arrival in Manhattan. He went out and signed JuCo Jonathan Alexander and brought in transfer Marcus Hayes to help fortify the position, but Alexander opted out this season and Marcus Hayes quit playing football before the 2019 season even started. He also signed a solid prospect in Tyrone Lewis but he was M.I.A. against Arkansas State. The 2020 class featured Malachi Mitchell and Aamaris Brown as high school signings and Hunter Henry as a transfer from Rice. None of the players signed by the Klieman staff saw the field against the Red Wolves.

Alexander opting out obviously hurt because he would have been heavily involved in the rotation at safety, but like running back, if the coaching staff had a time machine, they would grab a graduate transfer for 2020. It will be interesting to see how things shake out as the season progresses, because it’s impossible to parse out who isn’t ready to play because they aren’t physically or mentally ready and who isn’t ready to play because they missed larges chunks of camp, but it’s rare to see a major college program feature two untested walk-ons in the two deeps at safety.

* Note: When I talk about Covid-19, I’m looking at things purely from a football perspective.

Covid-19 is causing havoc throughout the college football world, but Kansas State in particular is getting hit hard. A team that couldn’t afford injuries coming into the season due to years of recruiting neglect from the prior staff is having to work around Covid opt-outs at key positions and a weekly rotation of players missing in action.

The problems go beyond who is and isn’t available on any given day because the Wildcats are a team built on execution. The overall team athleticism has improved over the last two seasons, but it’s still not a strength by any stretch of the imagination. This team was going to have to out execute their opponents, much like last season, and key players missing large chunks of practice hasn’t allowed that to happen.

Looking back at the Arkansas State game, more than anything else, I saw a team that looked rusty. Skylar Thompson wasn’t in sync with his wide receivers. The offensive line was a beat off in executing the power run game. The defense looked gassed in the 4th quarter and the safeties made several poor reads. After hearing Coach Klieman talk about how difficult it has been to practice, it made what I saw on tape against Arkansas State make sense. The team looked uncharacteristically sloppy because guys have been in and out of practice all fall.

As a fan, this season is going to come down to a matter of perspective.

As I mentioned at the beginning of this long winded article, I’m going to consider 2020 an exhibition season for the Wildcats. I’m going to enjoy the fact that I get to watch football, and I’ll be paying close attention to what the young guys bring to the table. Wins, at this point, will be considered a bonus. Under the best of circumstances, this team needed things to break right, and in college football terms, this may be the worst circumstances imaginable.

The blue blood teams with 4- and 5-star talent in reserve will be fine. Teams like Kansas State, will struggle because this season is all about depth. Thankfully, the Wildcats won’t be alone in this struggle and should be able to pick up wins along they based on who they have available on any given Saturday vs who their opponent has available. It’s still football, and in the end, the guys on the field need to play to the best of their ability, but I don’t think you can judge the players or the coaching staff based on the outcome of any given game.

I’m going to consider every Saturday with college football a blessing. I think you’ll enjoy this unprecedented season more if you do the same.

* If you’re still with me after the last 2000 words, this entire article was an attempt to soften the sting of the beating in-store for the good guys in Norman this weekend.

It’s going to be ugly folks.