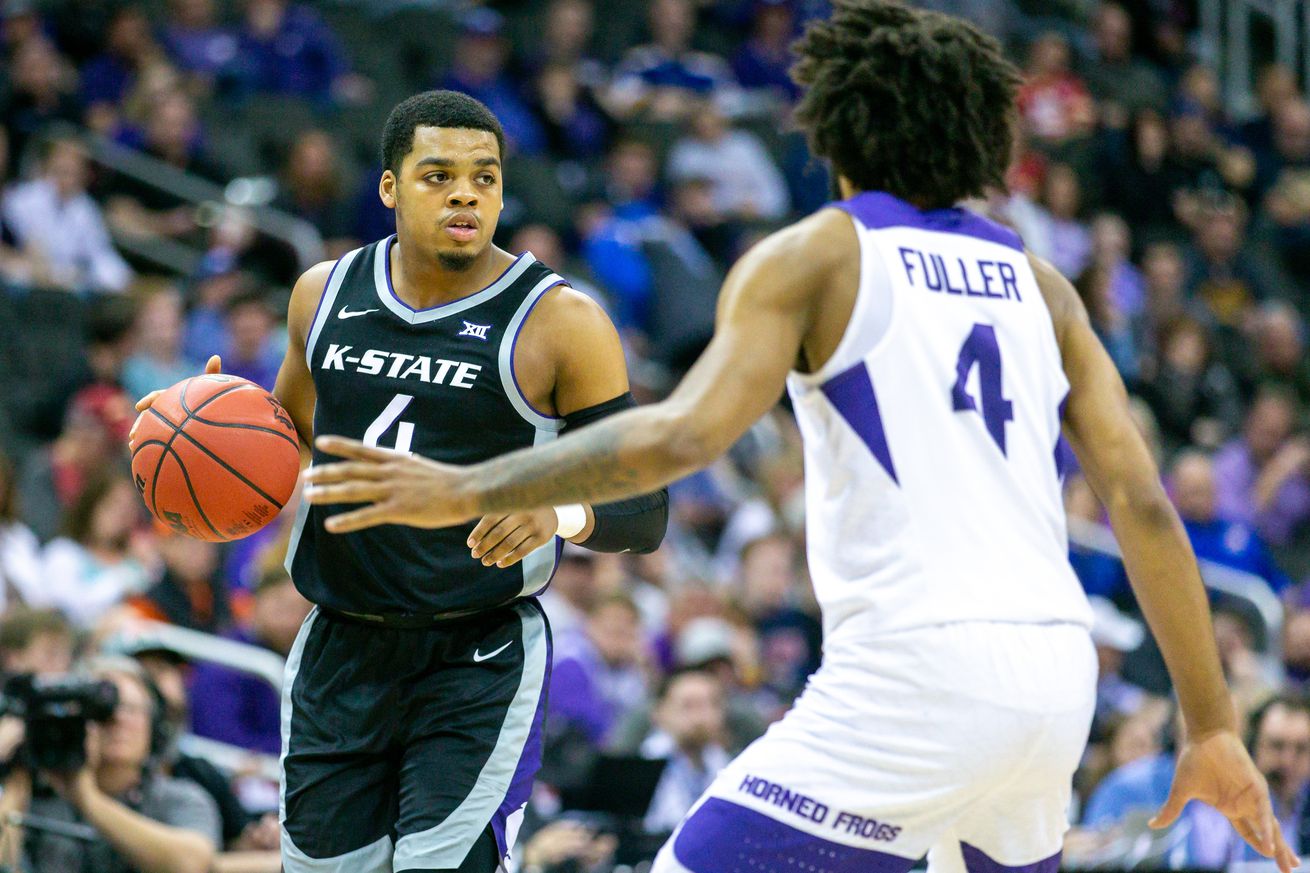 David Sloan came up with some important second-half baskets off the bench for Kansas State. | William Purnell-USA TODAY Sports

The Cats kept their season alive (unless the coronavirus ends it) by knocking off the Horned Frogs in a game full of big swings.

With a little help from TCU missing wide open shots, including a potential game-winning three, the Cats pulled off a 53-49 win with an 8-0 run over the final three and a half minutes. Mike McGuirl even sank a pair of clutch free throws to close it out after Makol Mawien, yes the same one who fouled out in 12 minutes with 2 points on his senior night – scored the go-ahead layup on a great pass from McGuirl.

David Sloan and Levi Stockard were the night’s unlikely heroes, even though Cartier Diarra scored an inefficient 13 points to lead the way offensively. McGuirl showed off some exceptional creativity and unselfishness to match his career-high with 6 assists, and the first time came against Alabama State so it doesn’t really count.

Kansas State’s defense got off to a great start, holding TCU to just two points in the first seven minutes. The offense eventually heated up to a similarly impressive level, capping off a 9-0 run to open up a 25-8 lead.

There were easy baskets, like Makol Mawien’s two-handed alley-oop dunk off a beautiful transition pass by Mike McGuirl. The Cats also hit some tough shots and knocked down three of their first five threes, with three different players connecting.

Of course, if you’ve watched any K-State basketball this season you won’t be surprised to know that didn’t last. Bruce Weber’s notoriously inconsistent offense only scored three points over the final 3:54 of the first half as TCU finally ended a scoring drought of nearly eight minutes and cut the lead to ten points.

To make things worse, a scary fall sent Xavier Sneed to the locker room early. Surely I wasn’t the only one feeling chills and sensing some déjà vu given K-State’s recent injury woes in the postseason.

Fortunately, he returned to start the second half and even hit a 3 about three minutes in to put Kansas State ahead 33-20. Sneed ended up scoring 8 points on an awful shooting night, but he did at least grab six rebounds and play solid defense,

Sadly, that three would be the last good thing to happen for a while, as TCU went on a 12-0 run to cut the lead to one. Incredibly, a nice post move by Levi Stockard ended an almost 5-minute scoring drought, then things returned to normal as P.J. Fuller hit a game-tying three and Stockard followed it with a turnover.

David Sloan tried his best to change the narrative with a layup and a jumper, then a very angry/determined face as he went to the bench during a TCU timeout. Moments later, his hopes and dreams were dashed by a vicious block from Kevin Samuel as Sloan went up for a layup.

Kansas State did some things and Cartier Diarra hit another stupid shot by putting a floater high off the glass to keep his team in front for a bit longer, but inevitably the unwillingness to adequately guard Desmond Bane caught up with the Cats. He scored 16 points despite K-State doing a great job in the first half to hold him to 2 points on 1-6 shooting with 3 turnovers.

RJ Nembhard also did his part with 19 points for a shockingly bad TCU offense, highlighted by a jumper to put the Horned Frogs ahead 46-45 with 4:47 left. Kevin Samuel scored the next three points and all felt lost until the unlikely finish, when K-State once again did a good job of stopping Desmond Bane, forcing guys like Fuller and Nembhard to beat them. They could not.

As a result, Kansas State advances to tomorrow’s quarterfinals – subject to cancellation – and a matchup with No. 2 seed Baylor. As you may recall, the Bears have a scary good defense and beat the Wildcats 63-57 and 85-66 earlier this season.