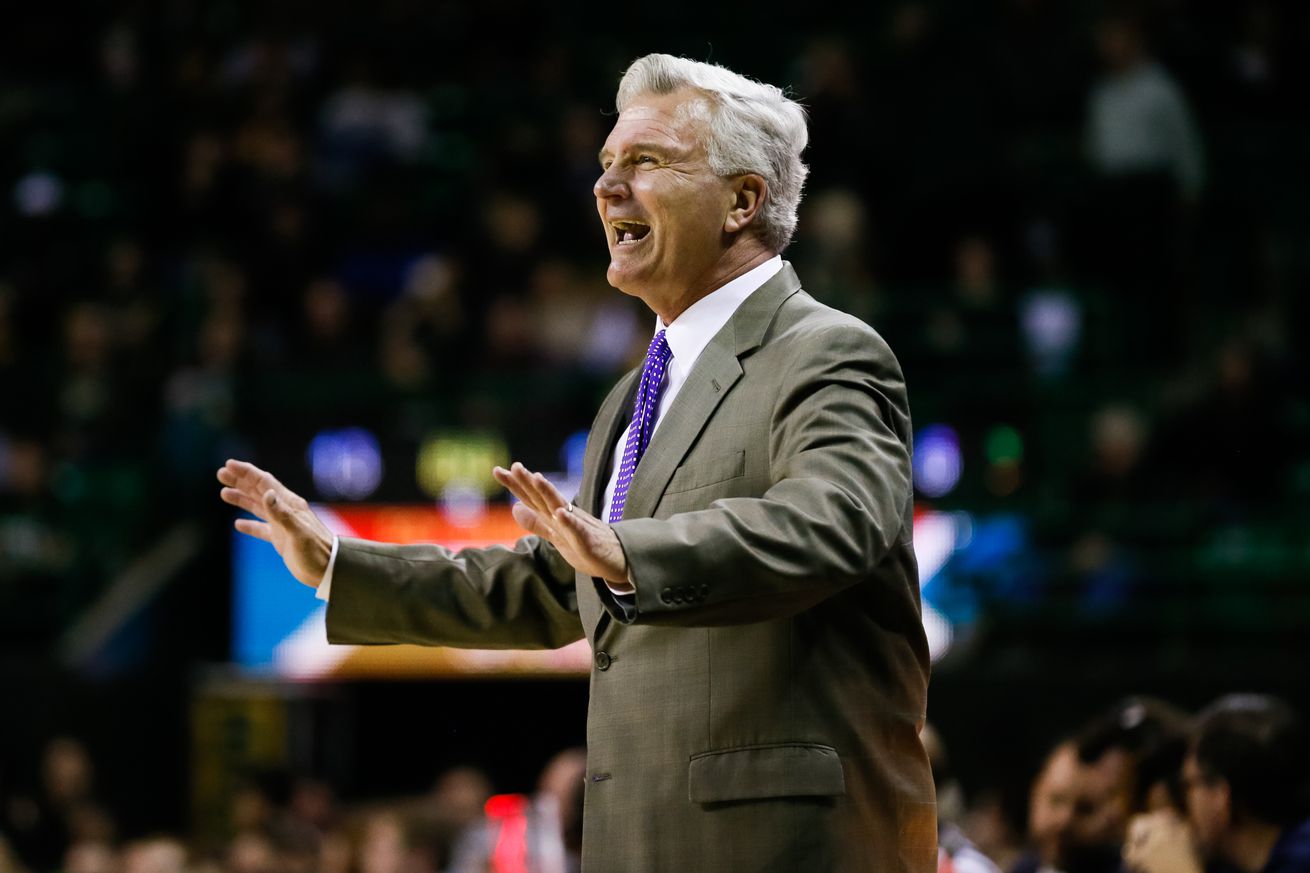 The K-State men’s team is plumbing the depths of the Big12, but try and remain calm…at least for now.

I was considering writing a preview for the game Saturday, but let’s be honest, barring an absolute miracle, I would be previewing a loss. Now, don’t get me wrong, I’m pulling hard for a win, and I’ll watch the game until the score dictates that I find more productive things to do with my time, but facts are facts.

For the Wildcats to win, they need Kansas to bring their D-F game, and the Wildcats have to bring their A game. Even then, it would be a toss up. That’s just the way the season has played out. To go beyond that is a waste of precious brain resources.

Instead of previewing the Kansas game, I’d like to talk about how K-State fans are handling this terrible, awful, no good, putrid, backed up septic tank of a season.

The way I see it, things break down like this:

This tends to be the loudest and most insistent faction. I’m not sure on their exact numbers because social media and talk radio tend to amplify the fans yelling the loudest, but needless to say, there are quite a few true believers in this group.

I’m not going to dismiss these people out of hand, because I get it man. The product Bruce is putting on the court this year is bad. There’s no way to sugar coat it. This team isn’t “better than their record indicates” or “snake bitten”, maybe at some point this season it was, but right now it’s plain old bad. That’s the way things shake out sometimes. Firing the coach responsible for this debacle seems, on the surface, to be a logical reaction.

The thing is, it’s not going to happen.

Barring something blowing up off the court, Bruce Weber will be the coach of Kansas State next year, and in my humble opinion, that’s the correct move. This team is bad, but I look at the 2020 recruiting class and I see a coach that cashed in on his Big 12 title-winning season. Yes, there was a lag, but that’s generally the way recruiting works. Bruce has shown the ability to win and win big in Manhattan. The 2015 Wade, Brown, Stokes class was ranked 63rd in the nation and 7th in the Big 12, and he rode them to a Big12 title and the Elite 8, all without his best player contributing because of perpetually ill-timed foot injuries.

His incoming class is ranked 22nd nationally and 6th in the conference in a good recruiting year for the Big 12. No matter how far this team falls, Weber is going to get a chance to show what he can do with his incoming talent. If the 2020 class was normal Bruce recruiting good, maybe the Fire Bruce crowd would have more ammo, but it’s not.

Even if it was, I don’t think Bruce would be fired.

My basic rule is 3 years.

Year 2: Transition year. If they make the tournament, the clock resets, if not, you get to year 3.

Year 3: This is the make or break year. Don’t make the tournament this year, and I’ll help lead the Fire Bruce charge.

Bring In All New Players Faction

I tolerate this faction less than the fire Bruce faction. I find it unseemly to speculate on who will or won’t transfer out of the program. These guys decided to come to K-State and play, over other options. The coaching staff thought they were good enough to play at K-State, and they get to play until they decide it’s no longer in their best interest.

Now, these players might have to take a seat on the bench if they’re not good enough to help the team. In that case, they may choose to find greener pastures, but I’ll never call for a college kid to transfer out of a program.

Let me tell you a little story to illustrate my point.

One year for Thanksgiving I was tasked with making a pumpkin pie. No big deal. I cook all the time and whipping together a pie is well within my skill set. This year, however, I’d been a little too into the holiday spirit (Jack Daniels), and I assembled a pumpkin pie minus the sugar. I measured out the sugar, got distracted, and never dumped it into the mixer. It looked like a delicious pie, until my mom took the first bite and spit it into her napkin. A pumpkin pie without sugar is not good.

Here’s the thing, just because I got drunk and forgot to add the sugar, doesn’t mean the other ingredients are bad. I didn’t chuck the eggs and spices in the trash because the pie was awful. Those ingredients did their jobs, but because I left out one key ingredient, the pie was terrible.

That’s the way I see this team. It has most of the requisite ingredients to be a solid team, but it’s missing the sugar (or scoring in this case), and without the sugar, it’s an awful pie.

The guys on the current roster can fill important roles in the future, heck, some of them may even figure out how to score eventually. Getting rid of guys because they are who they are and not who you need them to be doesn’t make much sense to me. That’s why I’m encouraged about the incoming class, because I see a group of guys that specialize in putting the ball in the basket. They’re going to need some help in other areas, and I think some of the guys on the current roster can fill those roles.

Bruce is bringing the sugar in 2020, no reason to throw out the eggs, because a pie with sugar and no eggs is still a terrible pie.

This is the group that makes me grind my teeth. This year, one guy in particular is taking the brunt of this garbage season from the fans, and that guy is Cartier Diarra. In a way, I get it, because Cartier brings a good bit on himself. Yelling at the coach, regardless of what was said (and I totally believe Cartier in this instance) is never a good look, but it happens. Missing a windmill dunk because you’re frustrated and trying to prove a point is stupid and deserves a spot on the bench (which was given), but it’s forgivable.

I don’t think Cartier is a team cancer.

I don’t think he’s auditioning for a pro league.

If anything, I think he’s a guy that’s trying too hard. He sees that his team is in desperate need of a scorer and he’s trying to score. It’s just not working. What some people see as selfishness I see as someone trying to do the right thing, and becoming more and more frustrated that he’s not capable of doing what is needed to win (this is totally my opinion, I don’t know Cartier, and am only speaking from my own experience).

Let me lay it on the line.

If Bruce Weber thought he was in this thing for himself, and not K-State, he wouldn’t be on the team. It’s not like this team is winning. They’re playing for the future, and a team cancer isn’t good for the young guys. Bruce knows that, and Cartier is still on the team.

Since I’m telling stories today, I’ll give you one more that might give you some insight into my sympathy for Cartier. For all intents and purposes, I was Cartier my senior year of high school.

I played soccer and wasn’t nearly as talented as Cartier, but I was pretty good.

My junior season, our team was loaded. We started 9 seniors and 2 juniors. We made it to the state quarterfinals before being knocked off by a significantly bigger high school with a talented German forward who led the state in goals.

I came back my senior year, looked around, and all the guys I grew up playing with were gone. The new team was a hodgepodge of guys that the year before either sat at the very end of the bench, played on the JV team, or didn’t make the cut. My head coach was also gone.

What you need to know about me is that I absolutely loathe losing. I will no longer play board games with my wife because she consistently beats me and talks trash, and I can’t handle it.

The team I was playing for my senior year was always going to lose. It was a full-on rebuild after a dominant generation of players cycled out of the program.

I did not handle it well…at all.

At one point, I was given a game vacation and “kicked off” the team for…yelling at the coach on the sidelines after he took me out because I was being selfish. The reason I was being selfish, at least in my mind, was that if I knew for a fact the guy I was passing to wasn’t capable of putting the ball in the net, keeping the ball was the best thing I could do for the team.

That’s what I see Cartier doing right now. He wants to win, he wants to do what’s best for the team, but he’s forcing things, and maybe he has a point. Sneed is good, but he’s good at being a complimentary player that feeds off other players.

If Cartier’s not going to make something happen, who is?

Next Year’s Team is Better with Cartier Diarra

Y’all want to win next year?

Stop trying to push one of your best players out the door. We’ve seen what Cartier looks like when he has more talent around him, and he’s a good player. Maybe he’s not a guy that can carry a team on his back, but he won’t have to try and be that guy next season.

Next year, he’s going to have more talent around him.

He’ll take fewer bad shots because the guys around him are capable of making good shots. He’ll turn the ball over less because he’ll be with guys that can handle the ball more. He’ll shoot a higher percentage from 3 because other guys on the team will be able to hit 3’s. His defense will improve because his minutes will be cut and he won’t have to expend as much energy on offense trying to make things happen.

Or maybe he won’t.

I’m willing to give the guy a break and want to see what he looks like in purple and white next year.

I hope he comes back for a redemption tour and tears up the Big 12 next year.

I get it: this is a helpless feeling. You guys care about basketball, and that’s important. Watching K-State lose sucks. I’m going through the same thing now with Purdue (to a lesser extent), and it’s brutal.

It takes every ounce of restraint to not call for everyone’s head. Sometimes after games I have to put my phone down and take the dog on a long walk into the cold Kansas night to keep from venting my frustration on every social media platform available.

This season too shall pass, and I’m optimistic about the future of Kansas State basketball. If the optimism isn’t rewarded in wins, then this conversation changes completely, but right now all you can do is take some deep breaths, grab the leash, and head out into the cold.

You’ll probably run into me if you’re in my neighborhood.