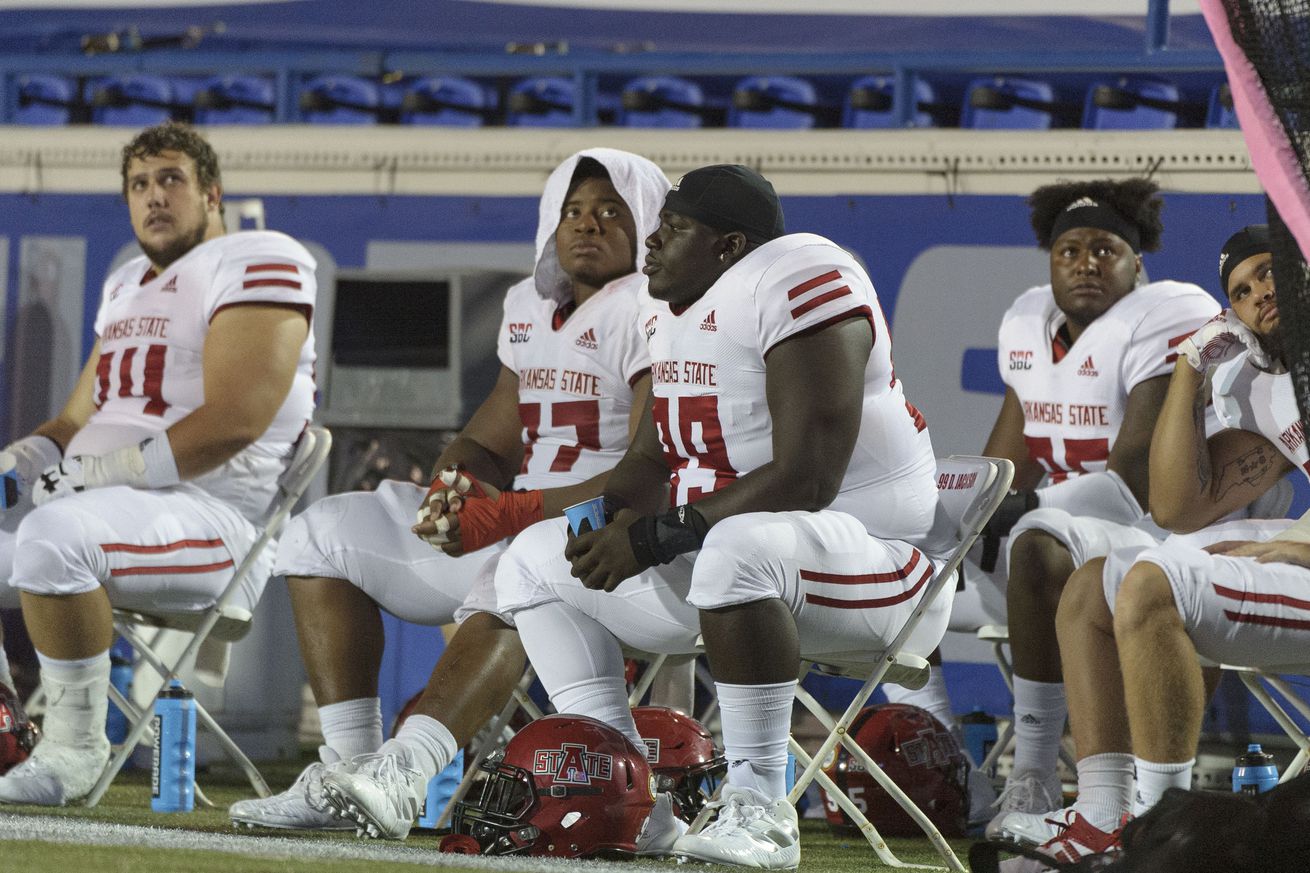 It was a rough opener for the Red Wolves. | Justin Ford-USA TODAY Sports

Thanks to cancellations and a skinny schedule, K-State is playing on national television this weekend.

It’s been a long, cruel year, but tomorrow we finally get a small reward: the return of Kansas State football.

K-State (0-0, 0-0 Big 12) plays host to their only non-conference opponent of the season, the Arkansas State Red Wolves (0-1, 0-0 Sun Belt). This is the only the third meeting between the two schools in football, and it’s safe to say that most of you remember neither of them. K-State has won both meetings, both in Manhattan; they won 37-6 in 1948 and 31-7 in 1980. The Wildcats sport an all-time record of 9-1 against current Sun Belt members. That one loss: the 17-15 disaster in Lafayette in 2009, the less of which we speak the better.

Arkansas State has built a program with a great deal of notoriety, no small feat in the Sun Belt. The Red Wolves went through a three-year stretch at the start of the 2010s in which they were coached by Hugh Freeze, Gus Malzahn, and Bryan Harsin for one year each. Those three led Arkansas State to a combined record of 26-10; none of them coached the Red Wolves in their bowl games because they all got snatched up by bigger schools as soon as the regular season ended. Arkansas State was also the final head coaching gig for Ray Perkins, the man who suffered the unwinnable task of succeeding Bear Bryant at Alabama.

But before all that, Arkansas State’s journey to relevance was a long and difficult one. They spent 64 years designated as a small college before becoming a Division I school in 1974. In 1975, they went undefeated as a Division I independent, but when Division I-AA was created in 1977 the Red Wolves were assigned to that level. It wasn’t until 1992, the Ray Perkins season, that Arkansas State finally came back to Division I-A. Over the next decade, they struggled as both an independent and as a member of the now-defunct (for football, anyway) Big West Conference. Finally, in 2001, the Red Wolves became a charter football member of the Sun Belt. In the decade before Freeze, they only won one conference title in a down year where they shared the crown with the two Louisiana schools; since 2011, they have won or shared the title five times.

That said, life has become difficult again with the addition of Appalachian State and Georgia Southern to the Sun Belt. Blake Anderson, in his seventh year at the helm, has a record of 47-30 — good, but not great. The Red Wolves are coming off a big loss at Memphis last weekend, a 37-24 setback in which they gave up 502 yards of offense and made no distinction regarding the means by which they were willing to surrender that yardage.

Logan Bonner started that game at quarterback, but was replace midstream by last year’s starter, Layne Hatcher. Hatcher threw for nearly 3,000 yards last year, so he will present a test for the Wildcat secondary. Marcel Murray is the most significant rushing threat, coming off an 820-yard season in 2019.

Depending on how healthy the Wildcats really are, this shouldn’t be a great challenge. But K-State has opened the season with hiccups before, and has not won a season opener which happened to be against an FBS team since beating UCLA in 2010. Don’t get too cocky.

There will be limited attendance, but everyone who’s getting tickets from the box office already has them. There are seats available through third-party sellers, ranging anywhere from $42-$84; most of these are in the south end zone or on the south end of the general admission deck.

A national broadcast against a non-Power Five team? You bet. The game will air on FOX, with Gus Johnson, Joel Klatt, and Jenny Taft on the call.

The radio broadcast can also be heard via the TuneIn app, while live stats will be available via kstatesports.com. If you’ve cut the cord and are looking for a full streaming option, fuboTV is now carrying every major cable network which has football in keeping with their sports-centric business model.