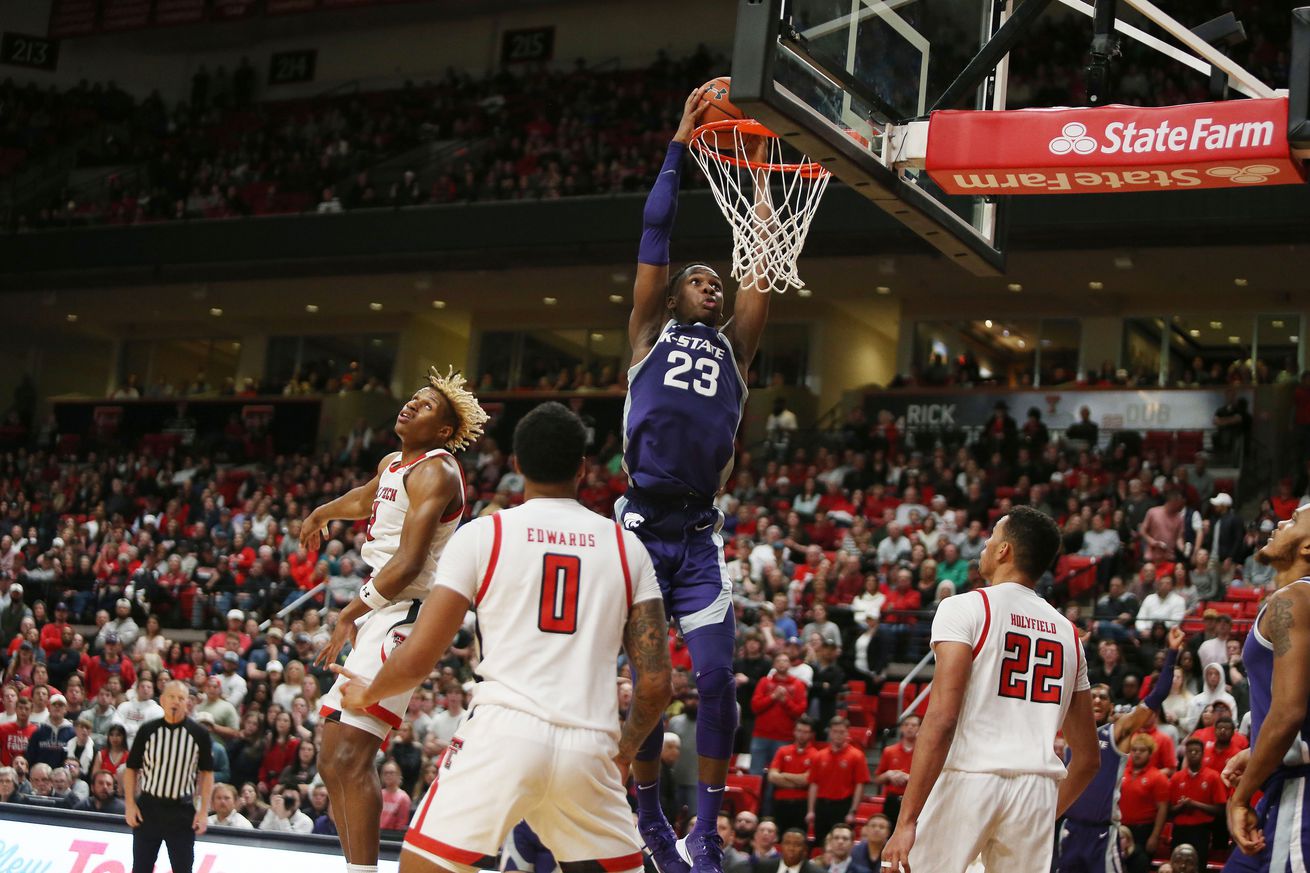 On rare occasions, everyone can unanimously point to one moment in a game and agree that it was the pivotal play that most affected the outcome. Against Texas Tech Wednesday night in Lubbock, Kansas State’s Cartier Diarra turned what could have been a huge bounce for the Wildcats into a momentum boost for the Red Raiders, who took advantage of the miscue and went on to win, 69-62.

Though K-State (9-17, 2-11 Big 12) started slowly and trailed by 11 with only four minutes to play in the first half, the Wildcats used a zone defense and dribble-penetration to claw back to within three, 30-27, on an Antonio Gordon bank shot just before halftime. After the break, with Texas Tech (17-9, 8-5) leading 44-42, Diarra got a steal and had open floor to the rim. He tried a dunk that was multiple degrees too dazzling, clanged it off the back iron, and watched as Tech’s Davide Moretti drained an open three-pointer to stretch K-State’s deficit to five points.

The Wildcats would never get the score tied, much less surge into a lead, though they hung tough and did not quit, even when the margin built as high as 13.

The missed showtime came after a sideline tirade that Diarra directed at Coach Weber, in which he shouted, scowled and finally clapped derisively in his coach’s direction. He played again after that outburst. After the dunk attempt, the athletic and enigmatic redshirt junior was finished for the night.

It is unfair to say that K-State lost because of that one play. Everyone had a hand in the outcome. But that play certainly thwarted confidence and momentum that had built through the Wildcats’ comeback. To use classic understatement, it was unhelpful.

Each of the three freshmen made positive contributions to the Wildcats’ effort, headlined by Antonio Gordon, who hit back-to-back three-pointers from the left corner late to sustain some intrigue in the game and force Tech to play until the final thirty seconds. Gordon finished with a career-high 14 points on 6-7 shooting. He also led the team with eight rebounds. Montavious Murphy was more aggressive offensively than he has been in awhile, getting to the rim and to the free throw line. He scored nine, on 3-4 shooting from both the floor and the charity stripe. DaJuan Gordon scored four, but he was active, as usual, and got his points on a smooth dribble-drive and a weak side rebound and put-back.

Turnovers were a problem for both teams, as Tech gave the ball away 18 times, and K-State lost it to carelessness on 16 possessions.

The starters scored all but two of the Red Raiders’ points. Moretti led the way with 18, which included 4-10 marksmanship from beyond the arc. Jahmi’us Ramsey scored 17, and Kyler Edwards added 14 to the Tech cause. Tech shot 23-46 (50%) for the game.

K-State shot 19 free throws, but made only 12. Tech, meanwhile, was 15-17 from the line. Little things like free throw shooting continue to cost the Cats chances to win.

Texas comes calling on Saturday. The January 11 match in Austin was close until halftime, but after that the Longhorns got away for a 64-50 win. The Cats will need to bring more offense to extend the string of winning home seasons for K-State, which hangs in the balance with only Texas, Kansas and Iowa State remaining on the home schedule.