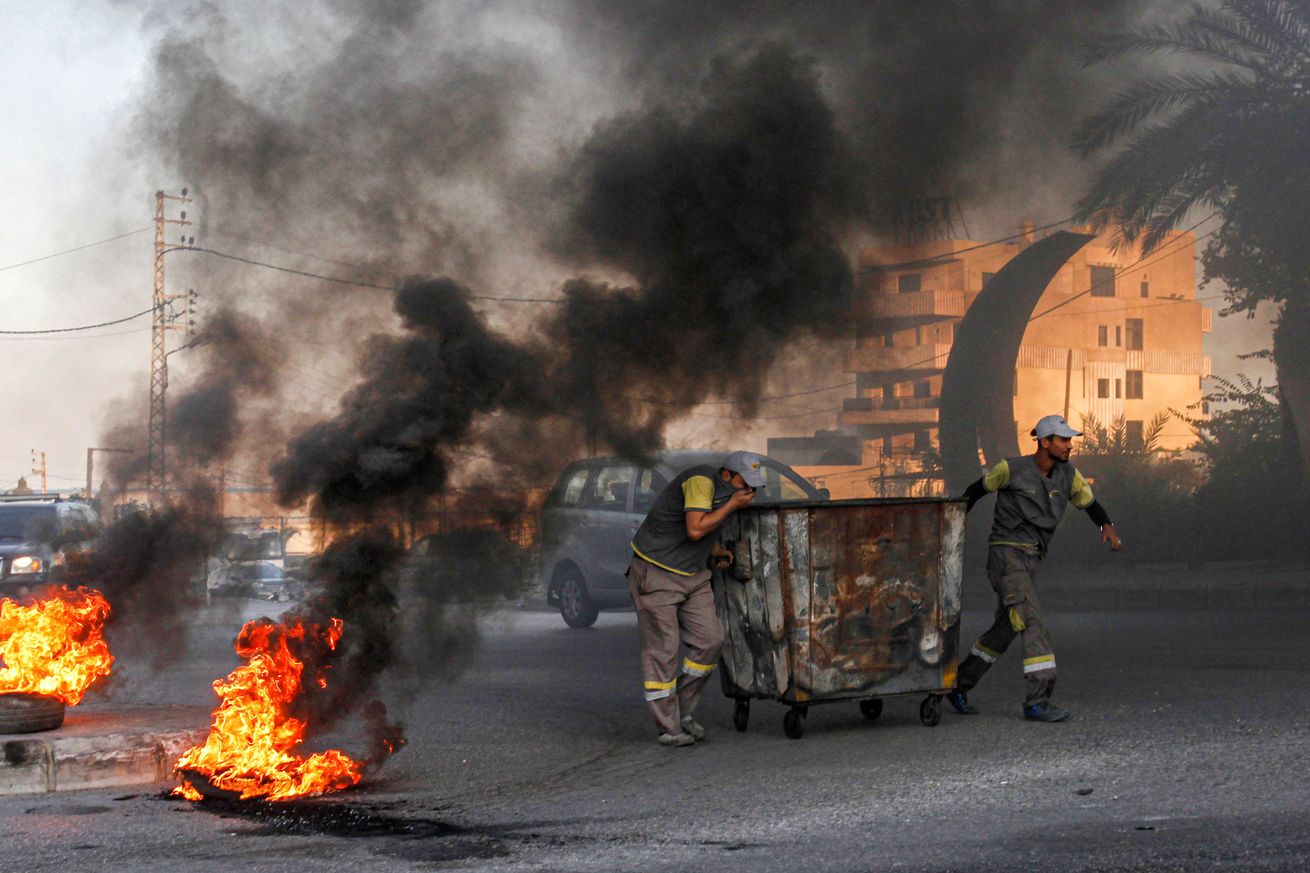 Look, there aren’t any game photos yet. | Photo by MAHMOUD ZAYYAT/AFP via Getty Images

A 17-yard pass from Layne Hatcher to Jonathan Adams with 38 seconds left was the dagger which sent Kansas State Wildcats (0-1, 0-0) down to defeat in a 35-31 loss to Arkansas St. Red Wolves (1-1, 0-0) this afternoon at Bill Snyder Family Stadium.

The Red Wolves were able to march downfield at will on the final drive, interrupted by a long delay when Wildcat safety Wayne Jones was injured. The first play after the restart was a 12-yard catch by Brandon Bowling with Ryan Herington filling in for Jones. After the winning touchdown, Skylar Thompson tried to get the Wildcats downfield, but his usual magical comeback ability fell short.

The game started out pretty well, and K-State held a 21-7 lead in the second quarter. But Arkansas State roared back.

K-State forced a three-and-out on the opening drive, after which Arkansas State lined up entirely on one side of the ball, which made zero sense and allowed Will Jones II to come in unmolested for the block. Taking over at the 19, it took Thompson two plays to notch his first touchdown pass of the season, connecting with Phillip Brooks from 17 yards out only 96 seconds into the game.

The teams traded drives for a bit, with Hatcher subbing in for Logan Bonner for a drive on the Arkansas State side, before the Red Wolves got on the board. Bonner connected on a 33-yard pass to Jonathan Adams, followed a bit later by what looked like a brilliant one-handed catch by Adams from 29 yards out. It was ruled incomplete, but pass interference on Will Jones gave Arkansas State the ball on the 2, and Bonner found Adams immediately to cash in the six.

The Cats came up empty on the following drive, but then Bonner got destroyed by Wyatt Hubert and a play later Will Jones picked off Bonner to give K-State the ball at midfield. Thompson immediately hit Deuce Vaughn for 24 and Chabastin Taylor for 12 on consecutive plays to get the Cats inside the 10. On third down, Thompson kept it himself and was upended at the one — but that was enough for a new set of downs. Two plays later, Vaughn ran it in from three yards out to regain the lead for K-State.

The defense forced a three-and-out before Thompson connected with Taylor for 42 yards and Malik Knowles (one-handed) for 27 before finding his childhood buddy Briley Moore on a seven-yard touchdown reception.

After getting to midfield in relatively quick fashion, Blake Anderson called out the trick play. Jeff Foreman took the pitch right and heaved a 48-yard touchdown pass to Rashauud Paul to get Arkansas State back within a touchdown. K-State embarked on a drive they’ll regret all season. A 20-yard carry by Taylor was all but wiped out by an unsportsmanlike conduct penalty on Jax Dineen, and the drive ended when Blake Lynch missed a 43-yard attempt.

The Red Wolves threatened, getting inside the 10 as the half neared its end, but a botched handoff by Bonner (aided by the immediate presence of Will Jones) was recovered by Wayne Jones at the 11. Since K-State would be receiving the second half kickoff, they ran the clock out.

The defense bent but didn’t break again on their first drive after the break. After K-State couldn’t get anything going, the Red Wolves marched down inside the ten again, but a tackle for loss by Cody Fletcher and a sack by Eli Huggins led to a 38 yard field goal attempt by Blake Grupe; it was wide left. The Cats again couldn’t move, with a big gain by Vaughn wiped out by a holding penalty on Harry Trotter. Arkansas State charged right back, as Lincoln Pare busted off a 58-yard run, aided by Wayne Jones deciding to just hit him instead of attempting a tackle. A few plays later, Hatcher found Giles Amos on a four-yard jump pass, and the game was tied.

On the ensuing drive, Thompson dropped a 35-yard dime on Taylor. Will Howard came in for a few plays, and connected with Jax Dineen for 24 yards. Then everything went to hell.

The drive stalled at the 29 and Lynch once again shanked a 47-yard attempt, giving Arkansas State the ball. Adams caught a 21-yard pass. The defense held and Ryan Hanson lined up to punt, but it was a fake; Henington committed pass interference, and the Red Wolves had the ball on the 22. Another trick play, a double-reverse pass, resulted in a 17-yard gain. Then Bonner found Adams again for a 5-yard score and the Red Wolves took a 28-21 lead.

K-State took over at their own 45 after a good return by Knowles, but a bad snap pinned K-State at their own 22, and on 2nd-and-33 Thompson was forced to ground the ball to avoid a sack… but was hit late, giving K-State 15 yards and a first down. Thompson aired one out to Knowles for what would have been massive yardage, but Knowles dropped the ball on the way down.

And then Harry Trotter, who had been a complete negative for 53 minutes, finally showed up. He broke free for a 24-yard gain, and on the following play finished the job with a 5-yard touchdown run to tie things up again at 28.

The defense went three-and-out, and Thompson caught Sammy Wheeler open for 24 yards. A pass interference penalty saved the drive on 3rd-and-8, and Lynch finally found the uprights from 35. But the defense couldn’t hold, and there wasn’t time for the offense to answer.

Taylor was the leading receiver for the Wildcats with 98 yards on 4 catches, and added a 20-yard run. Moore added 6 catches for 54 yards; five other receivers had over 20 yards with none catching more than two balls.

Vaughn was a bright spot in his debut, leading the team in rushing with 47 yards on 12 carries. Trotter had 43 yards on 16 carries, but more on that later.

Adams led the Red Wolves with 98 yards on eight catches and three touchdowns; Jamal Jones had 95 yards on 16 carries.

What did we learn?

Thompson is not a perfect dime-dropper, and he was just a little off today. His receivers didn’t always help him, dropping a bunch of balls, but Thompson was still up to his usual antics of just slightly overthrowing a ball or being just a couple of feet on the wrong side of a receiver.

He’s not going anywhere, and he probably shouldn’t, but he did himself no favors with his detractors today.

2) Harry Trotter has no business being this team’s feature back.

Before his big run to set up the tying score, Trotter had 14 carries for 14 yards. At one point, he had as many carries as the rest of the team combined, and had been outgained by them almost 2:1. This is not acceptable.

Trotter has uses, as he demonstrated with a vengeance on his touchdown run — an outside jaunt with blocking. What he is utterly incapable of doing is running off-tackle. It’s a guaranteed zero-to-two yard waste of a down.

3) Deuce Vaughn, on the other hand…

Vaughn had a few dud carries, as one does. But when he didn’t, he was magic. He’d also have had 67 yards on the day if Trotter hadn’t held on one of his big gainers. As a true freshman, Vaughn is the real deal, the first legitimate freshman threat K-State has had at the position in quite awhile.

Jones, a redshirt freshman, was all over the place. He blocked a punt. He intercepted a pass. He was the clear and present danger which may have caused the botched handoff which K-State recovered.

You probably need to steel yourselves. Arkansas State is not a bad football team, but at the same time they got rolled by Memphis Tigers last week. There were obvious weaknesses which K-State could have, and should have, exploited but failed to do so because of terrible personnel decisions.

But none of that excuses the defense. Despite a sack, Wyatt Hubert was very quiet this afternoon. The rest of the defensive line was so irrelevant that their names never got called after the introduction of the starting lineups. The secondary got wrecked.

Justin Hughes and Elijah Sullivan, however, played very well in their first chance to be on the field at the same time in decades. The pair combined for 11 tackles.

It’s going to be a long season, and the next outing isn’t going to make you feel any better at all: a trip to Norman on the 26th. Woof.