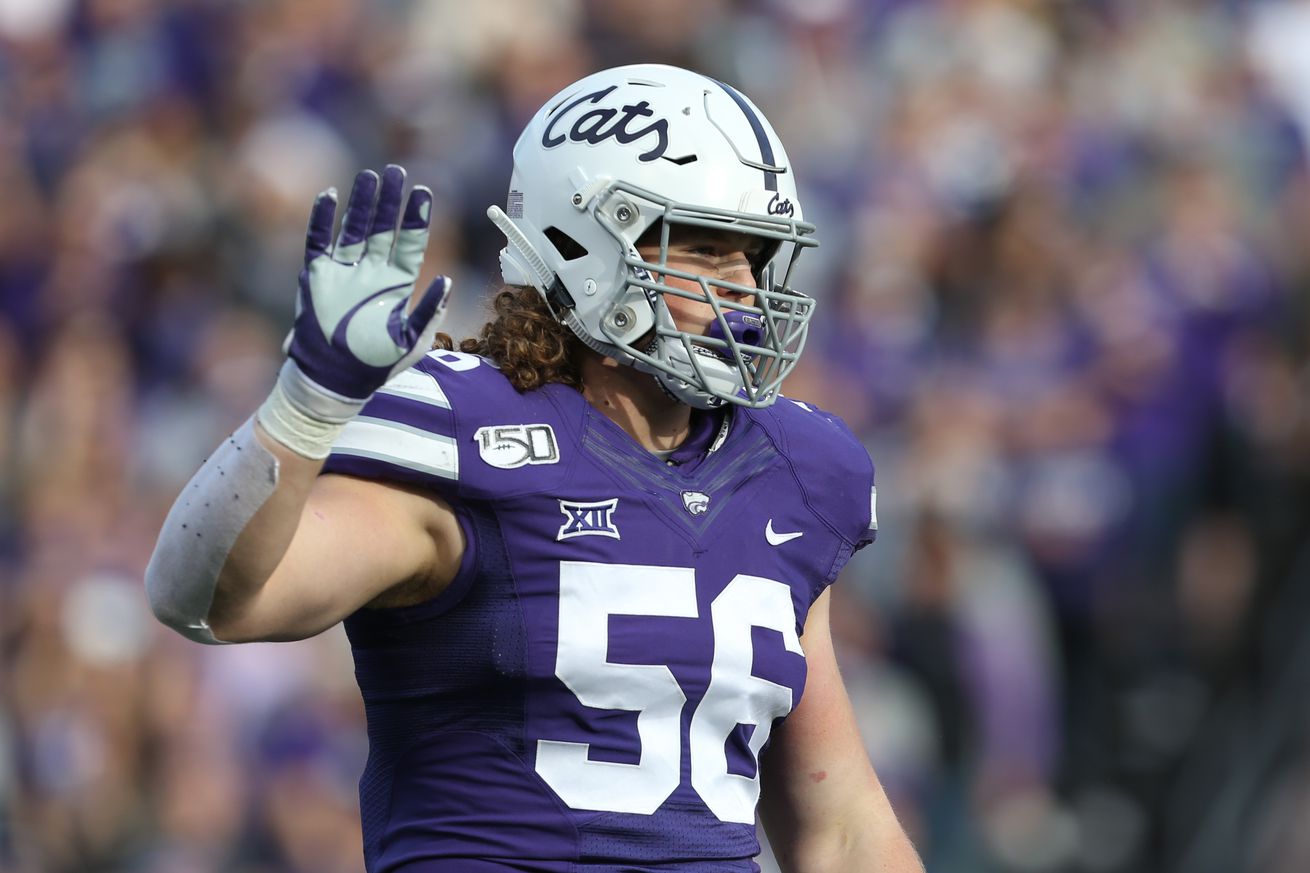 New coach? No problem! Wyatt Hubert (56) in 2019 had arguably his most successful season yet at defensive end, and while he must overcome the loss of his running mate, Reggie Walker, this season, he still is poised for a stellar junior year. | Photo by Scott Winters/Icon Sportswire via Getty Images

In which BracketCat counts down the 56th day until the 2020 kickoff with a profile of Kansas State defensive end Wyatt Hubert.

Wyatt Anthony Hubert (b. June 13, 1998) is an athletic and tough defensive end who enters his junior season ranked 12th nationally among active players in career sacks per game (0.5) and tied for 13th in career tackles for loss per game (0.91).

Hubert redshirted in 2017 and had a stellar debut season as a redshirt freshman in 2018, when he saw action in all 12 games with seven starts, en route to Freshman All-America honors from USA TODAY Sports.

He carded 34 tackles, 8.5 tackles for loss and 4.5 sacks on the year, to go along with a pass breakup and an interception against Mississippi State.

He started 12 games in 2019, leading the team with 12.5 tackles for loss and seven sacks en route to first-team All-Big 12 honors from the league’s coaches and the Associated Press.

He tied his career high of two sacks against both Oklahoma State and Texas Tech, also causing a fumble in the game in Stillwater, and dug even deeper with a season-high four tackles to go along with 1.5 tackles for loss and a sack in K-State’s win over No. 5 Oklahoma.

Hubert also had two tackles for loss against Iowa State, recorded at least a TFL in nine of his 12 games played, and was a candidate for the Ted Hendricks and Bronko Nagurski awards.

Hubert was rated the nation’s 29th-best strongside defensive end in the Class of 2017 by Rivals, while he was ranked as the second-best player in the state of Kansas by ESPN.

He earned a spot on the USA Today Sports/American Family Insurance All-USA Kansas team, in addition to All-Midlands Region honors from PrepStar.

Hubert also picked up all-state honors as a senior from The Topeka Capital-Journal, The Wichita Eagle and the Kansas Football Coaches Association, while he was an honorable mention selection as a junior.

Hubert also played tight end, totaling 39 career receptions for 500 yards and a pair of touchdowns. He was selected to play in the 2017 Kansas Shrine Bowl, and also participated in wrestling and track and field.

Here’s what Bill Snyder had to say about Hubert’s intangibles prior to the 2018 spring game:

“Wyatt makes headway constantly. He’s one of those young guys that is really into it and really cares about it. It makes a difference to him. He tries to do what coaches ask of him, and he is a guy that gives it his very best effort every snap. Guys like that are always going to make some headway, and he continues to do so. Good young guy.”

So far in two seasons under both Snyder and Chris Klieman, this has proved absolutely true.