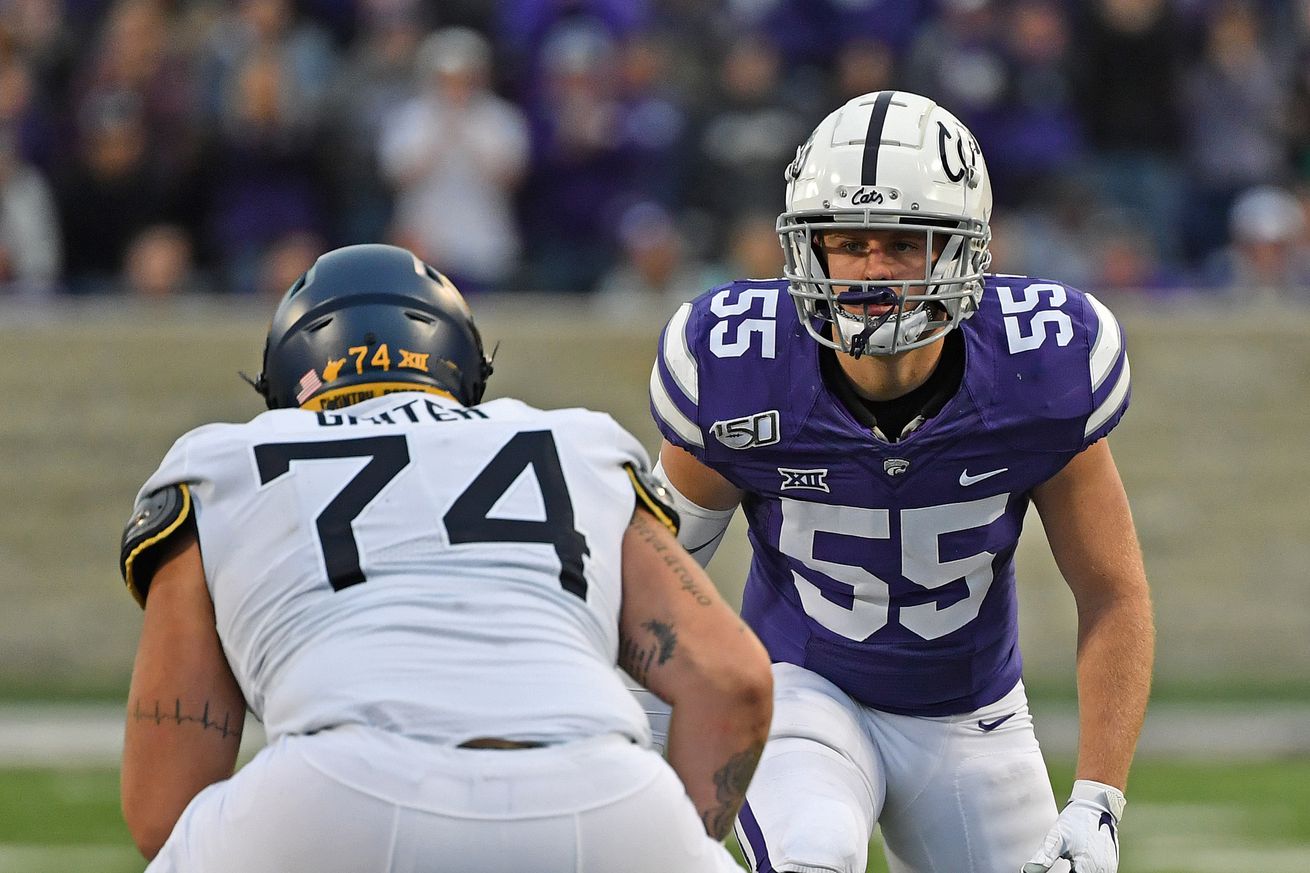 Cody Fletcher made an unexpected impact in 2018, but his steady presence was more anticipated in 2019 and he will be counted on this season to provide senior leadership on defense. | Photo by Peter G. Aiken/Getty Images

In which BracketCat counts down the 55th day until the 2020 kickoff with a profile of Kansas State linebacker Cody Fletcher.

Cody Wayne Fletcher (b. Aug. 26, 1997) is a tough, physical linebacker who transferred in from the community college ranks. He will continue to work on special teams in 2020 while competing for more playing time at linebacker after recovering from an injury early in 2019.

Fletcher played in all 12 games in 2018, primarily on special teams, and finished third on the squad with five special teams tackles, all coming on kickoff coverage.

He set a season high with six tackles at Baylor, when he also saw action at linebacker, and also had two tackles against UTSA and Texas Tech.

Fletcher saw action in each of the final seven games of the 2019 season after recovering from an injury sustained in fall camp. He totaled 13 tackles and three pass breakups.

Fletcher had a season-high five stops at Texas — just one shy of his career high — while he notched a career-best two pass breakups at Texas Tech. Three of his 13 tackles on the season came on kickoff coverage.

He earned second-team All-Southwest Junior College Football Conference (SWJCFC) honors in 2017 after leading the Apaches with 104 tackles and leading the SWJCFC with 11.6 tackles per game.

Fletcher also recorded 8.5 tackles for loss, two sacks, two fumble recoveries and seven pass breakups at Tyler, and had double-digit tackle games in seven of the nine contests in 2017, including a 17-tackle performance at Trinity Valley.

He also recorded 15 tackles in the season opener at Kilgore College and 14 at Blinn College after redshirting during the 2016 season.

Fletcher played prep football under head coach Byron West at Henrietta (Texas) High School, where he helped to lead the Bearcats to the quarterfinal round of the 2015 UIL 3A D2 state playoffs and an overall 12-2 record.

He was an honorable mention all-state honoree, while he was the District 2-3A D2 Defensive MVP after totaling 210 tackles during his senior year and later was selected to play in both the Green Belt Bowl and Oil Bowl all-star games.

Fletcher also played baseball, tennis and basketball in high school, earning academic all-state honors in the latter. Twice he was named the District 9-3A Defensive MVP as a catcher for the Henrietta baseball team. His brother, Conner, was a pitcher at Tarleton State.