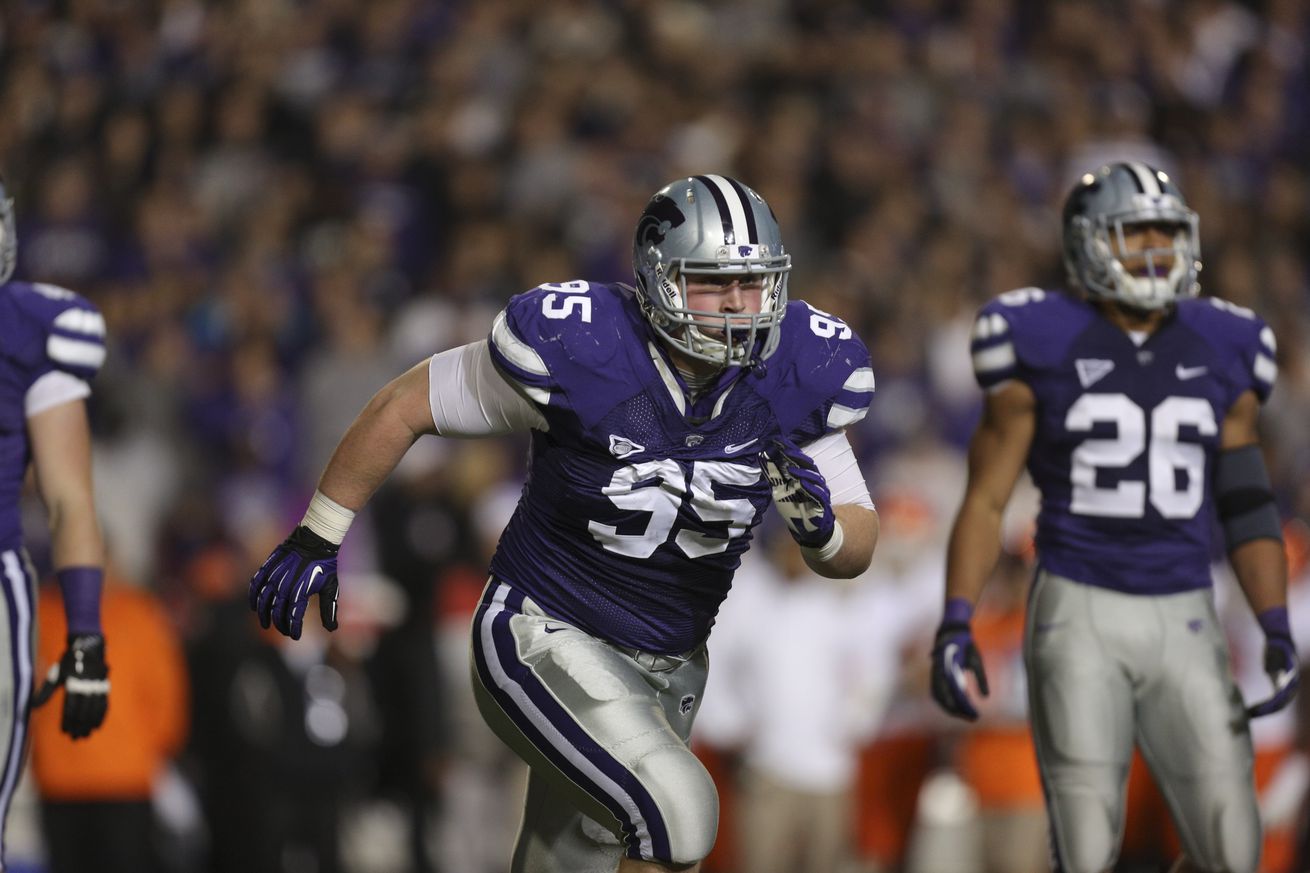 Welcome to the first truly jarring change of the Chris Klieman era at K-State: A defensive tackle the size of Travis Britz (95), but wearing a No. 5 jersey, not No. 95, 75, 55 or something … normal. | Photo by Ed Zurga/Getty Images

In which BracketCat counts down the fifth day until the 2020 kickoff with a profile of Kansas State defensive tackle Derick Newton.

Goal No. 5: BE TOUGH. Mentally and physically.

Derick James Newton (b. Oct. 20, 1999) is a JUCO transfer defensive tackle who has a very good chance to be in the defensive line two-deep at the start of the 2020 season.

Newton, who originally signed with K-State out of high school but was not academically eligible, redshirted in 2018 at Butler Community College under head coach Tim Schaffner.

After playing a single season in 2019, he was rated the 46th-best overall community college prospect in the Class of 2020 by Rivals, while he was the 18th-best community college defensive tackle by 247Sports and No. 18 by ESPN.

Newton finished third on the team with 69 tackles in 2019 to go along with 19.5 tackles for loss and six sacks, and also had four forced fumbles and three fumble recoveries.

He had a season-high 11 tackles with two forced fumbles at Iowa Western, while he had 10 stops at Hutchinson and set a season high with 2.5 tackles for loss in the season opener against Iowa Central.

Newton came away with eight tackles and a season-high three sacks against Garden City.

Overall, he helped to lead the Grizzlies to a 10-3 record, which included a win over Trinity Valley in the Midwest Classic Bowl and a final No. 5 national ranking, and played with fellow Wildcats Parker Bruce, Hillard Cozine, Dawson Delforge, Taiten Winkel and Ty Zentner.

Newton prepped under head coach Robby Pruitt at Coffee High School in Douglas, Georgia, where he was named a first-team all-state performer as both a junior and senior by the Georgia Sportswriters Association, while he was a first-team honoree in 2017 and an honorable mention pick as a junior by The Atlanta Journal-Constitution.

He also voted the Georgia High School Association (GHSA) All-Region Class 1-AAAAAA Defensive Player of the Year as a senior after totaling 93 tackles and 11 sacks.

Newton helped to lead the Trojans to a 10-4 record in 2017, which culminated with an appearance in the Georgia Class 6A State Championship.

He led Georgia Class 6A in 2016 with 23 sacks, while he recorded 107 tackles and 36 tackles for loss, and also participated in wrestling, finishing third in the state as a junior.

His re-recruitment was spearheaded by K-State recruiting coordinator Taylor Braet.