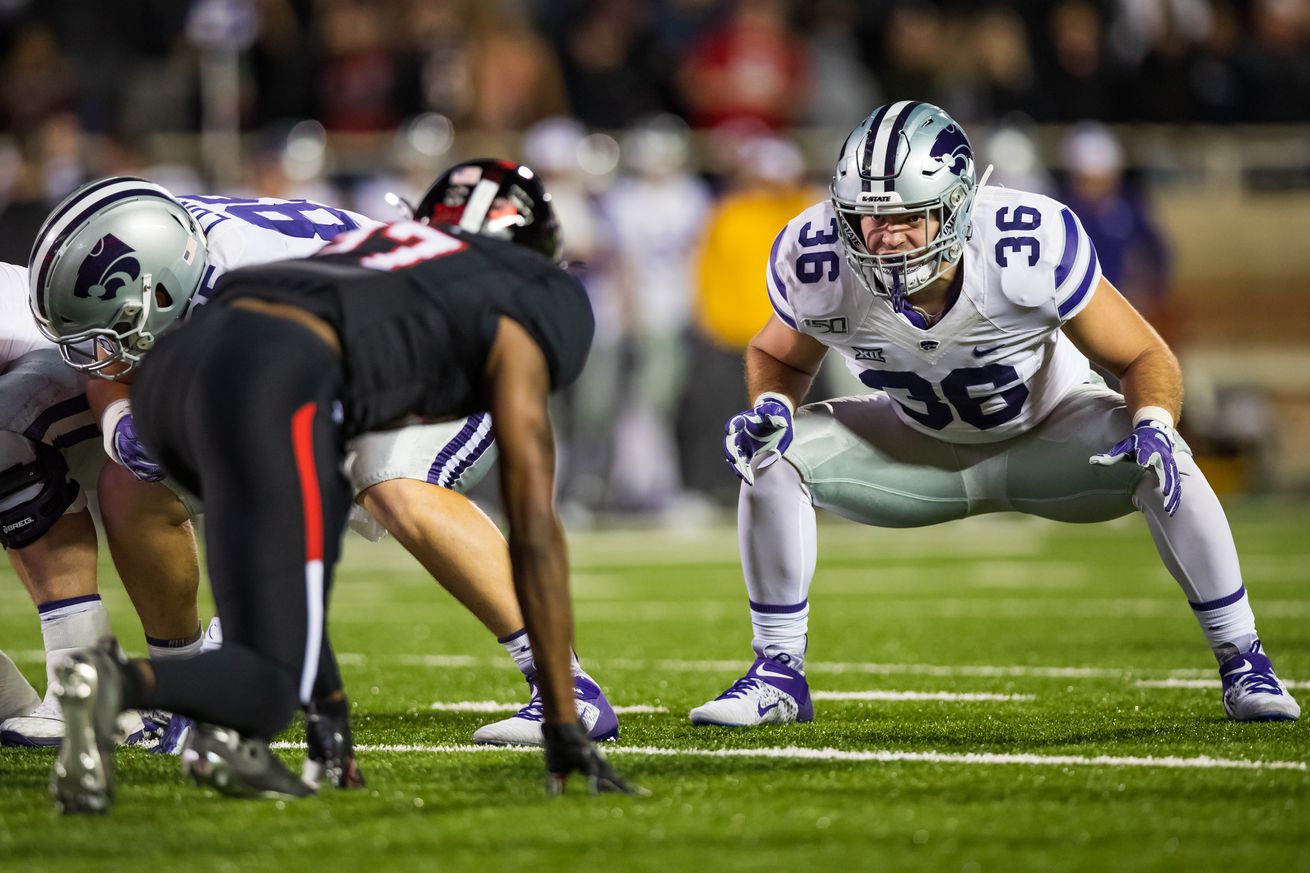 Mason Barta (36) has seen action as a fullback in every game in each of the past two seasons. He’s even starting to accumulate some pass-catching statistics in Chris Klieman’s diverse FB/TE attack. | Photo by John E. Moore III/Getty Images

In which BracketCat counts down the 36th day until the 2020 kickoff with a profile of Kansas State fullback Mason Barta.

Mason Aaron Barta (b. Dec. 16, 1997) is an in-state product whose father played for K-State as part of Bill Snyder’s first team. Mason originally signed his National Letter of Intent in 2016, but deferred his enrollment to spring and redshirted in 2017.

He played in all 12 games in 2018, primarily on special teams and in short-yardage situations, and helped the offense to finish third in the Big 12 by averaging 182.6 rushing yards per game, which included a 184.2-yard average in conference games to rank second.

Barta then saw action in all 13 games in 2019, including starts against Oklahoma State, Baylor, Texas and Texas Tech. He had one catch out of the backfield, which came at Texas.

Barta helped to block for 178 rushing yards per game to rank fourth in the Big 12, while he was a part of helping the Wildcats to score 29 rushing touchdowns, the third most in the Big 12 Conference. He also was a second-team Academic All-Big 12 honoree.

A four-year letter-winner for Holton High School under his head coach and father, Brooks Barta, Mason was rated the top outside linebacker in the state of Kansas for the class of 2016 by Scout.

Barta earned first-team all-state honors as a senior from The Wichita Eagle and The Topeka Capital-Journal, while he was an honorable mention selection from those media organizations as a junior.

He also was named to the USA Today Sports/American Family Insurance All-USA Kansas team as a senior.

Barta helped lead the Wildcats to a trip to the Class 4A Division II state championship game in 2015. The team went 14-0 and was the Class 4A state champion in 2012. He totaled 1,718 career rushing yards and 21 touchdowns, including 1,051 yards and 15 scores as a senior.

Barta also recorded 285 career tackles, including 128 during his senior campaign, with eight tackles for loss and three interceptions in 2015.

He was selected to play in the 2016 Kansas Shrine Bowl, also played basketball and was a high school teammate of former K-State linebacker Trent Tanking.

Mason’s father, Brooks Barta, was a linebacker for the Wildcats from 1989 to 1992, earning first-team All-Big Eight Conference honors as a junior in 1991 and Academic All-American accolades as a senior in 1992. He ranks second in school history in career tackles with 436.

Mason’s grandfather, Roger, was a legendary high school coach at Smith Center High School and was the subject of The New York Times’ bestseller book, “Our Boys: A Perfect Season on the Plains with the Smith Center Redmen.”