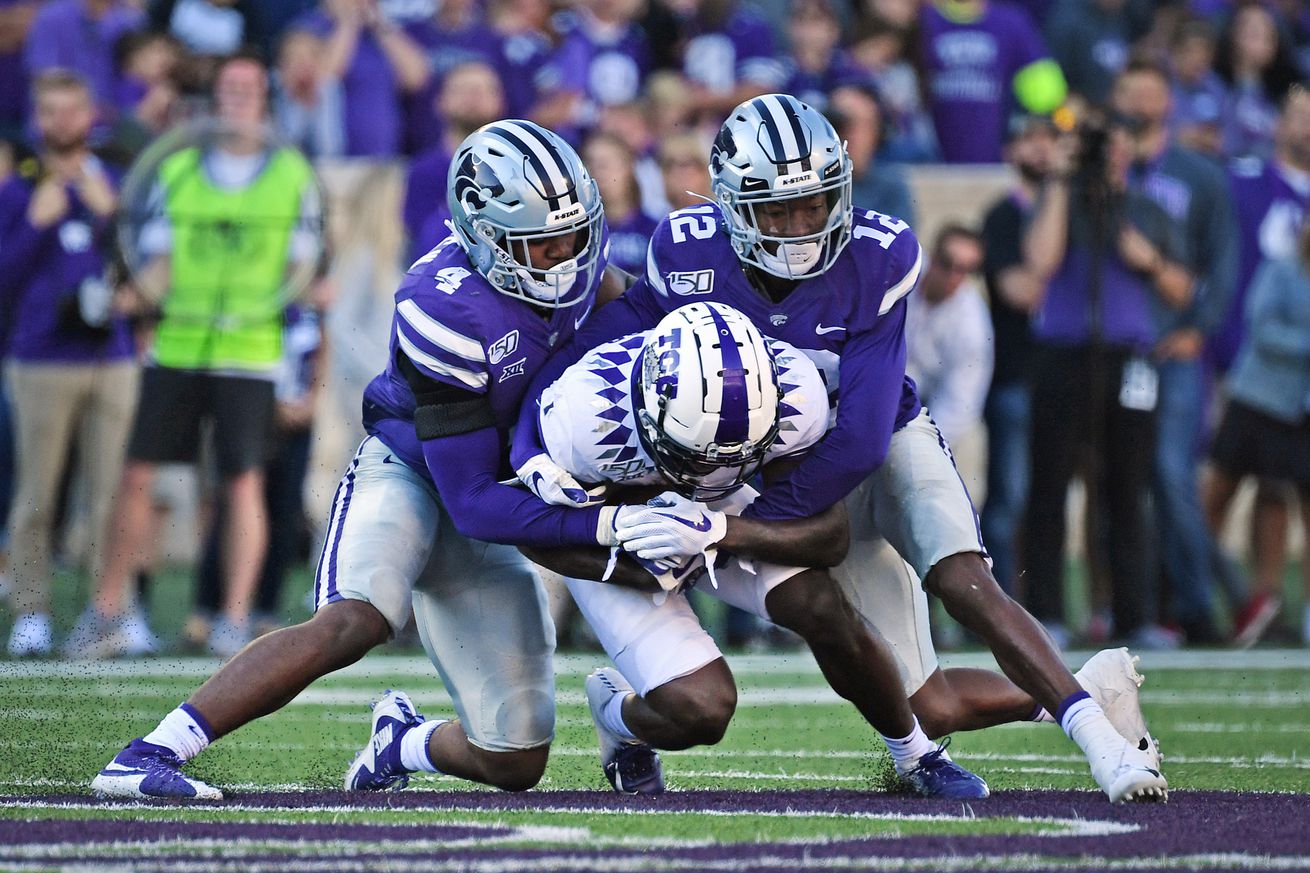 We’re lumping corners and safeties into one group, because it’s easier that way.

Since we started over on offense, we’ll jump over to defense for the next installment of the 2020 position previews. And what better place to start that the guys who will be roaming the defensive backfield for the Kansas State Wildcats.

We’re lumping cornerbacks and safeties into one post, even though they have separate position coaches, because they are still pretty similar, and it makes things nice an neat for us. We’ll catch you up on the corners first, then take a look at the safeties.

Senior corner AJ Parker is back to headline this crew, and will essentially be a third-year starter after coming off the bench early in 2018 to start most of the rest of that season. But beyond that, the field is wide open.

Walter Neil Jr. was the presumptive starter on the opposite side, but reports out of camp were that he had been passed up at that spot by grad-transfer Kiondre Thomas and sophomore Lance Robinson, who saw some significant action towards the end of last season. Presumably, being passed by two guys was the impetus for Neil to explore the transfer market himself as a grad transfer (and we do wish him the best of luck).

Thomas is likely the favorite to be the opening-day starter since he’s got more experience, overall, than Robinson, but expect to see heavy doses of both, especially in the season opener, before that spot is settled.

Shifting slightly inside, the nickleback spot also had a presumptive returning starter in Jahron McPherson, who played nearly all of 2019 in the nickleback role. Except that Jonathan Alexander decided to use his opt-out for the 2020 season (citing reasonable health and mental issues after contracting COVID this summer), and so it seems like new defensive coordinator, and safeties coach, Joe Klanderman might be more interested in moving McPherson back to a true safety spot to make up for losing Alexander’s maturity on the back end.

If it’s not McPherson and nickle, then the likely starter becomes Will Jones, who saw reserve action in four games in 2019 while preserving his redshirt. It’s also possible, thanks to the NCAA’s eligibility waiver for the 2020 season, that we could see a true freshman play minutes in most games in this spot, if TJ Smith is as advertised.

That’s true for the reserve roles across the board at corner, where true freshman Tee Denson could also use the extra waiver ability to see more action than he might normally get with a top three like Parker, Thomas, and Robinson. And we haven’t even metioned JUCO transfer Justin Gardner, who should also push for reserve minutes behind Parker and Thomas/Robinson. There’s a lot of talent on the outside right now, and that’s not a bad problem to have.

We already talked about Jonathan Alexander, but it bears repeating because he was expected to be a big part of the defensive game plan thanks to his experience, range, and athleticism. Having McPherson move back to that role keeps most of the athleticism and all of the range and experience, but it’s still not ideally what the coaching staff would like to be dealing with.

So if McPherson does move back, then the starters are set (again), with the other safety spot manned by returning starter Wayne Jones, who started all 13 games opposite Denzel Goolsby last season.

Behind those two on the depth chart is a bit more of a mystery. The coaches seem to be high on redshirt-freshman Tyrone Lewis, and Brock Monty and Ross Elder have both been with the program for a while and have seen spot duty reserve roles, while also being mainstays on special teams units. Lewis is likely the first guy off the bench, but depending on the opponent the coaches might favor one of the more experienced guys if the substitution is needed.