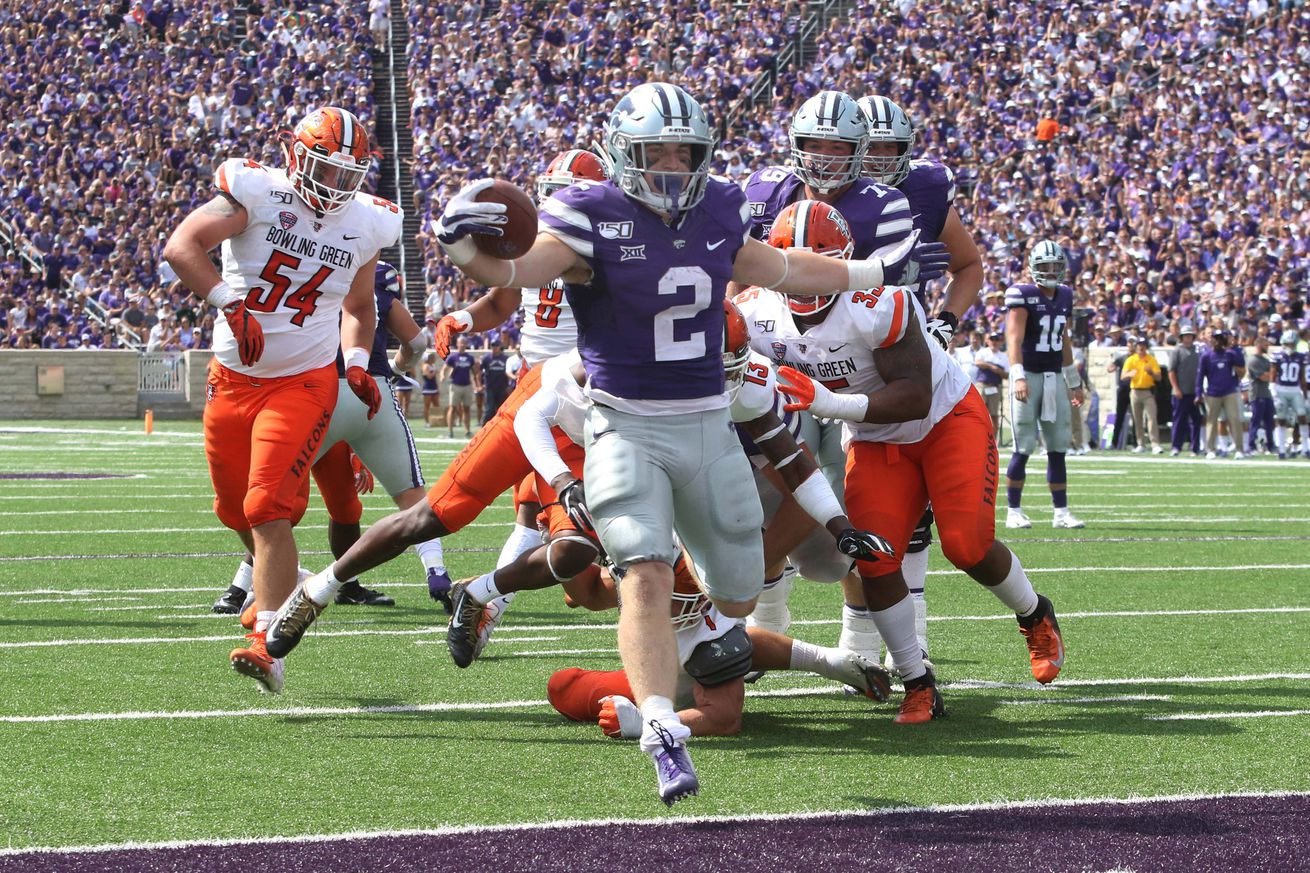 In a “typical” season, Harry Trotter (2) would have been the most impressive newcomer on our offense. But he was behind both James Gilbert and Jordon Brown on the depth chart. This year, the No. 1 running back spot belongs to him alone. | Scott Sewell-USA TODAY Sports

In which BracketCat counts down the second day until the 2020 kickoff with a profile of Kansas State running back Harry Trotter.

Harry Hayes Trotter (b. Dec. 11, 1997) is a former JUCO running back who transferred in by way of Louisville and sat out 2018 due to NCAA transfer rules.

Trotter, who graduated in May with a bachelor’s degree in kinesiology, played in all 13 games in 2019, including starts against Kansas, Texas and West Virginia. He finished fourth on the team with 263 yards and three touchdowns on 66 carries, caught three passes for 16 yards, and set career highs in yards (92) and carries (17) in his first career start at Kansas.

Trotter scored the first touchdown of the Chris Klieman era at K-State with a 9-yard run in the season opener against Nicholls, a game in which he finished with 50 rushing yards.

He also scored the following week against Bowling Green and enters 2020 as the presumptive starter at running back, after James Gilbert and Jordon Brown both graduated.

Trotter played his freshman season under Curtis Horton at Fort Scott Community College in 2016. He rushed 146 times for 503 yards and eight touchdowns, while he caught 14 passes for 86 yards.

Trotter’s best rushing game of that year was against Central Methodist, when he had 159 yards and three touchdowns on 19 carries in a game that featured a season-long rush of 52 yards. He came back with a 77-yard effort against Coffeyville.

Trotter caught a season-high four passes for 14 yards against Hutchinson, while he had a season-high 33 receiving yards on three catches against Butler.

He then transferred to Louisville and played in nine games during the 2017 season, rushing four times for 27 yards; had a season-long rush of 13 yards against Kent State; and also returned a kickoff for 13 yards at Wake Forest.

Trotter played prep football under head coach Jermaine Monroe at Maur Hill-Mount Academy, where he totaled 2,940 yards and 36 touchdowns during his career, including a 1,657-yard, 19-touchdown campaign as a senior in 2015.

He also caught 11 passes for 87 yards and touchdown as a prep, and picked up all-state honors from the Kansas Football Coaches Association as a senior.

Trotter also earned honorable mention all-state honors as both a junior and senior from The Topeka Capital-Journal, while he earned the accolade from The Wichita Eagle as a senior.