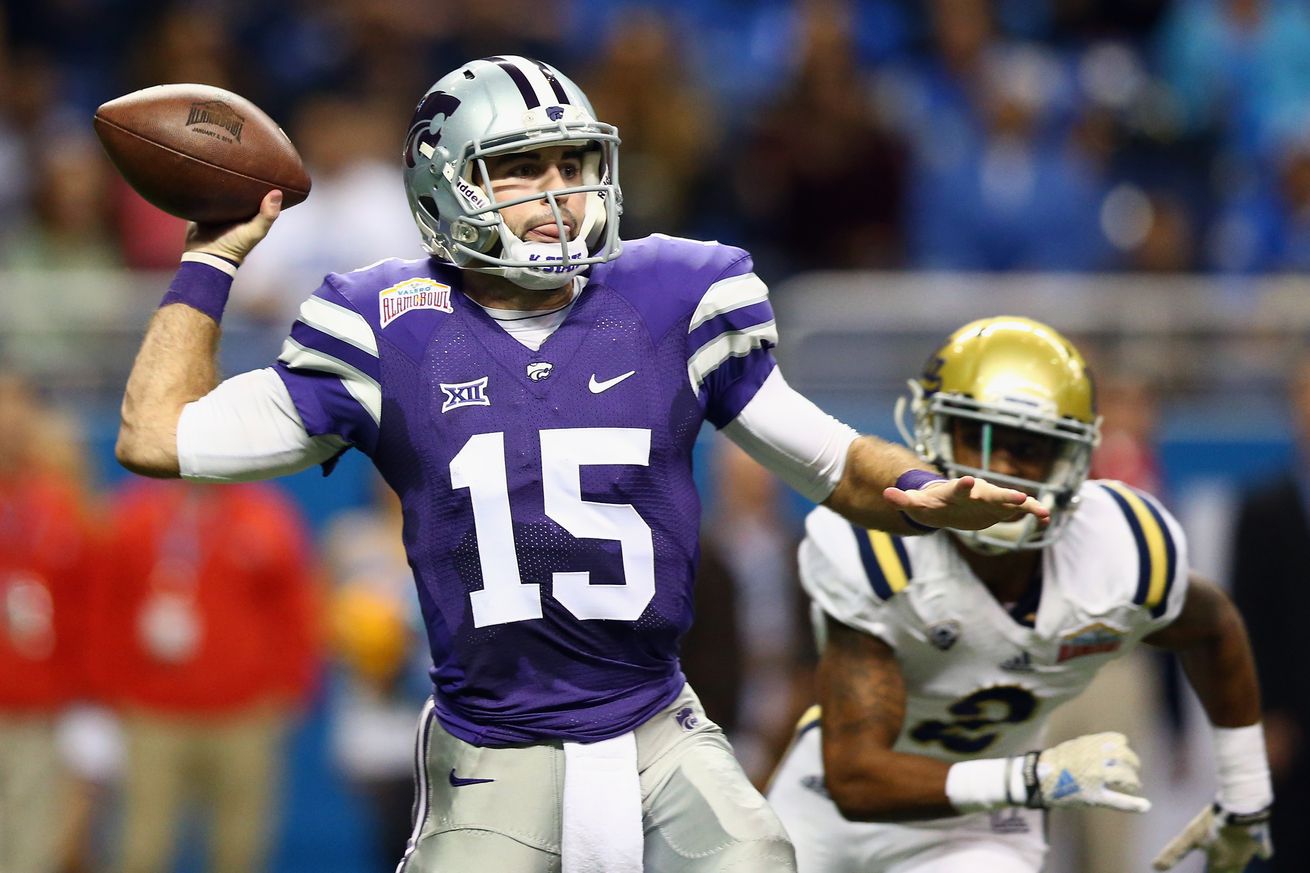 Is it too much to hope that star freshman Will Howard can become as great a gunslinger as former K-State quarterback Jake Waters (15)? | Photo by Ronald Martinez/Getty Images

In which BracketCat counts down the 17th day until the 2020 kickoff with a profile of Kansas State quarterback Will Howard.

Goal No. 15: LEADERSHIP. Everyone can set the example.

William Thomas Howard (b. Sept. 24, 2001) is a taller, elite pro-style quarterback from Downington High School West in Pennsylvania who plans on majoring in engineering. He enrolled in time for spring practices and has a chance to be the primary backup in 2020.

Regarding this decision to enroll early, The Philly Voice opined:

If anyone is equipped to do this, it’s Howard. He possesses all of the components, carrying a weighted 4.34 GPA and a 1,380 score on the SAT. He was the leader of the Whippets’ best season ever, and displayed great character in standing up to questions after throwing two interceptions in the state semifinal loss to Central Dauphin.

Howard played under head coach Mike Milano at Downingtown West, where he was viewed as the 13th-best pro-style quarterback in the Class of 2020 by 247Sports, while ESPN ranked him as the 26th-best dual-threat quarterback in the class.

He also was regarded as the seventh-best overall prospect in the state of Pennsylvania by 247Sports and No. 11 by ESPN.

He threw for 5,308 yards and 48 touchdowns during his prep career for the Whippets, including a 2,543-yard, 27-touchdown performance as a senior to lead Downingtown West to a 13-2 record, a trip to the state semifinals and the Whippets’ first district title since 1996.

Downingtown West went 11-2 and earned a trip to the state playoffs during Howard’s junior season. In all, he rushed for 512 yards and 21 touchdowns as a prep, and also played basketball, earning a pair of all-area honors after being a 1,000-point scorer in his career.

Like many of the 2020 enrollees, Howard noticed when K-State upset Oklahoma in 2019:

“I knew Coach (Chris Klieman) was going to bring a winning culture. He comes in as the coach of one of the greatest college football dynasties in recent memory. He just instilled that winning culture,” Howard said. “Everybody was, like, ‘Man, look at K-State.’ I was, like, ‘Yeah, I know. I expected this. This isn’t anything out of the ordinary.’”

He is the first Pennsylvania player to sign with the Wildcats since Andre Coleman in 1990.