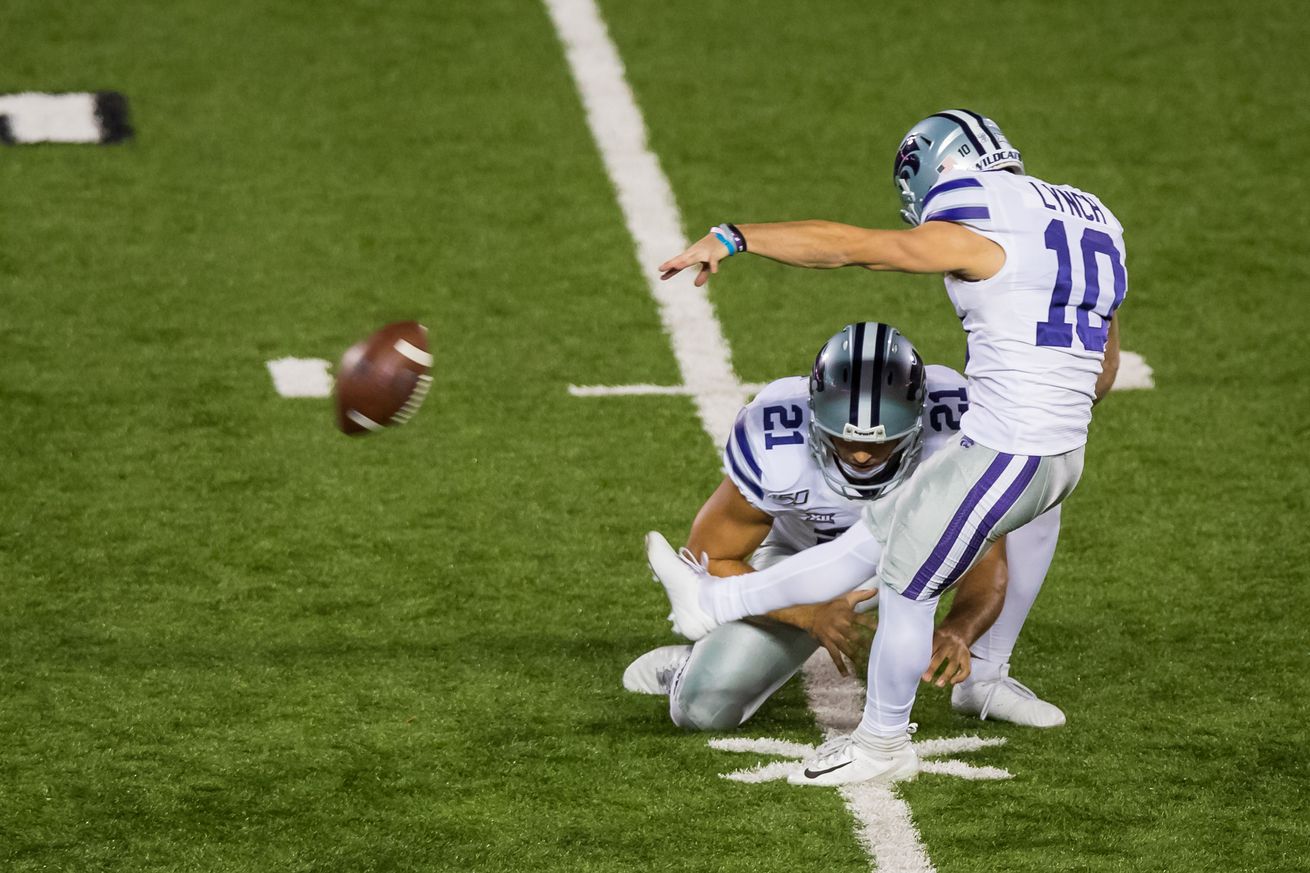 Many times in the past two seasons, Blake Lynch (10) represented the only consistent scoring K-State could muster. He ended up being an exceedingly pleasant surprise in 2018 and 2019. | Photo by John E. Moore III/Getty Images

In which BracketCat counts down the 11th day until the 2020 kickoff with a profile of Kansas State place kicker Blake Lynch.

Lynch has made 33 of 37 career field-goal attempts, and his 89.2% mark currently is the top mark in school history and ranks fifth nationally among active players entering 2020.

His 33 career made field goals are good for eighth in K-State history, while his 1.5 field goals per game ranks seventh nationally among active players.

The smallest player on the roster, Lynch entered 2018 in a three- or four-way competition for the right to replace Matthew McCrane as place kicker. He won that competition outright.

Lynch served as the team’s primary place kicker throughout a majority of the 2018 season, connecting on an astonishing 14 of 16 field goals and 19 of 20 extra-point attempts.

The only thing diminishing his production were the injuries that caused him to miss snaps.

Lynch led the Big 12 and ranked 14th nationally in field goals per game (1.56), while his percentage mark of 87.5 was third in the conference and 12th in the nation. His field-goal percentage also ranked third in school history.

Lynch was 4 for 4 on field goals against both South Dakota and Texas Tech, the latter effort earning him Big 12 Special Teams Player of the Week honors.

Both performances are tied for the second-most field goals made by a Wildcat in school history, while his performance against South Dakota marked the most ever by a Wildcat in his debut and also featured a season-long make of 44 yards.

Lynch became just the third player in school history to make at least four field goals in two different games in one season (joining Jamie Rheem in 1999 and Martin Gramatica in 1998).

He was true on a season-high five extra points against UTSA and Iowa State, and also kicked off 13 times for a 59.8-yard average.

A second-team Academic All-Big 12 performer in 2018, Lynch was put on scholarship following his exploits in the 2018 season opener.

The primary place kicker who connected on 19 of 21 field goals in 2019 en route to honorable mention All-Big 12 accolades from the league’s coaches, he ranked third in school history in field-goal percentage at 90.5%, a mark that ranked eighth nationally, fourth in the Big 12 and 13th in Big 12 history.

Lynch tied a school record with 15 consecutive made field goals, matching the mark of Jamie Rheem in 1999, and tied for fourth in K-State history in single-season field goals made, while his 1.46 field goals per game ranked fourth in the Big 12 and 25th nationally.

He totaled 103 points to tie for fourth in school history among juniors, and accounted for 7.9 points per game to rank fourth in the Big 12 among kickers and sixth among all players.

Lynch was true on all 46 extra-point attempts to tie the school record in percentage, while he ranked 10th in single-season extra points made and connected on multiple field goals in six games, including a season-high three in K-State’s three-point victory at Texas Tech.

He was true from a season-long 46 yards at Oklahoma State, and made all seven of his extra-point attempts against both Nicholls and Bowling Green.

A candidate for the Lou Groza Award, Lynch kicked off seven times in 2019 for a 53.6-yard average and one touchback, and he again earned first-team Academic All-Big 12 honors.

He enters 2020 as the presumptive starter and currently is pursuing his master of business administration degree after already earning his bachelor’s degree in finance in May 2019.

Lynch was rated a four-star kicker by KCKicking.com and 3.5 stars by Chris Sailer Kicking.

He lettered two years at Goddard-Eisenhower under head coach Charlie Nally and made 7 of 11 field goals during his senior campaign, including a long of 51 yards, after playing soccer as a freshman and sophomore.

Lynch earned all-state honors from The Topeka Capital-Journal and The Wichita Eagle as a senior in 2014, while he was an honorable mention pick following his junior year.

Interesting side note: Lynch’s mother, Kim, also attended Kansas State and his sister, Tera, attempted to follow in his footsteps as the varsity kicker for Eisenhower in the fall of 2016 (she since has gone on to play soccer at Washburn University, unfortunately for us).