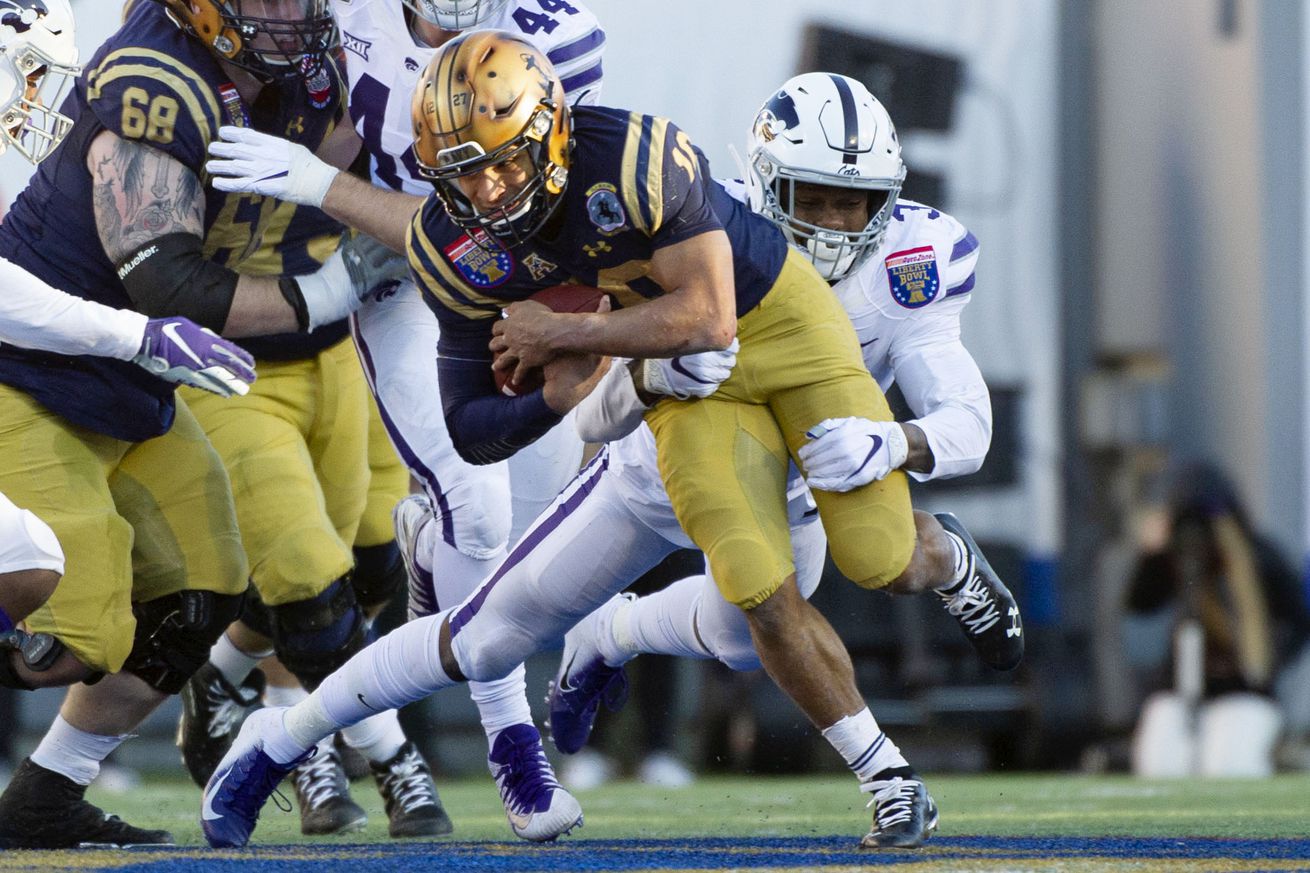 Elijah Sullivan (3) had a game for the ages in the 2019 Liberty Bowl, collecting 11 tackles to tie for the seventh-best performance in K-State bowl history. (No mean feat when trying to tackle a lightning bug like Malcolm Perry!) Now he gets his formerly injured running mate, Justin Hughes, back for the first time since they both played together in high school — possibly for two more seasons, if they both elect to return in 2021. | Justin Ford-USA TODAY Sports

In which BracketCat counts down to the 2020 kickoff with a profile of Kansas State linebacker Elijah Sullivan.

KICKOFF. Fighting, ever fighting, for a Wildcat Victory! Go State!

Elijah Sullivan (b. May 13, 1997) is a hard-working player who has seen action on both special teams and as a starting linebacker during his career. He earned his bachelor’s degree in communication studies in May 2019 and returns for his redshirt senior season.

Sullivan redshirted during the 2015 season. He had five tackles (four solo) for the White team in the 2016 spring game.

Sullivan then saw action in 11 games in 2016, totaling four tackles on kickoff coverage, and carded a season-high two tackles against Texas Tech, while he had one each against Missouri State and at Baylor.

He played in all 13 games in 2017, including starts at linebacker at Vanderbilt and against UCLA in the Cactus Bowl.

Sullivan carded 28 tackles on the year, which included a team-best nine special teams stops, with six of those coming on kickoff coverage.

He had a career-high six tackles against UCLA, came away with his first career sack at Kansas, and also recorded two forced fumbles and a fumble recovery on the year.

Projected as a starter entering 2018, Sullivan was held out of practice during Fan Appreciation Day for an undisclosed injury.

That proved to be an omen of things to come: He played in just three games in 2018, with one start, missing a majority of the season due to his injury.

Sullivan did manage to card seven tackles on the year, including a season-high five stops at West Virginia, and was granted a medical hardship for the season, keeping him as a junior.

He bounced back in a big way in 2019 by starting all 13 games, leading the team with 65 tackles en route to honorable mention All-Big 12 accolades from the league’s coaches.

He also had five tackles for loss, a sack, an interception and four pass breakups on the year.

Sullivan set a new career high with 11 stops in the 2019 Liberty Bowl against Navy — tied for the seventh most in K-State bowl history — as he was named K-State’s Defensive MVP for the game. His previous career high was nine tackles against both Texas and Texas Tech earlier in the season, games in which he also had a tackle for loss.

This promising linebacker is that rarest of creatures — a player from SEC country who K-State stole away from a prestigious SEC program. He is a testament to former offensive coordinator Andre Coleman and his development of Southeastern recruiting pipelines.

Sullivan chose K-State over offers from Auburn, Florida, Georgia State, Georgia Tech and Marshall, plus interest from Alabama, Clemson, Georgia and LSU. He was committed to Auburn for some time, but the Tigers bungled it.

Literally hours before National Signing Day, Auburn began telling Sullivan he was going to have to grayshirt, despite his being the Tigers’ third commitment and sticking with them for nine months. So he started looking around.

His high school and former college teammate, Duke Shelley, put him in touch with Andre Coleman, and unlike so many other K-State Signing Day stories that end in unhappiness, the Wildcats were able to get a rare (at the time) National Signing Day steal.

Sullivan played under head coach Bryan Lamar at Tucker High School, where he helped to lead the Tigers to a 10-3 record and an appearance in the state playoffs.

He also prepped with fellow linebacker Justin Hughes, who sat out 2019 with an injury of his own but will be Sullivan’s co-starter entering the 2020 season — a tearjerking, on-the-field reunion more than six years in the making.

He was an honorable mention all-state selection and All-DeKalb County pick by The Atlanta Journal-Constitution in 2014, and was named to the Georgia High School Association (GHSA) All-Region 2-AAAAAA team.