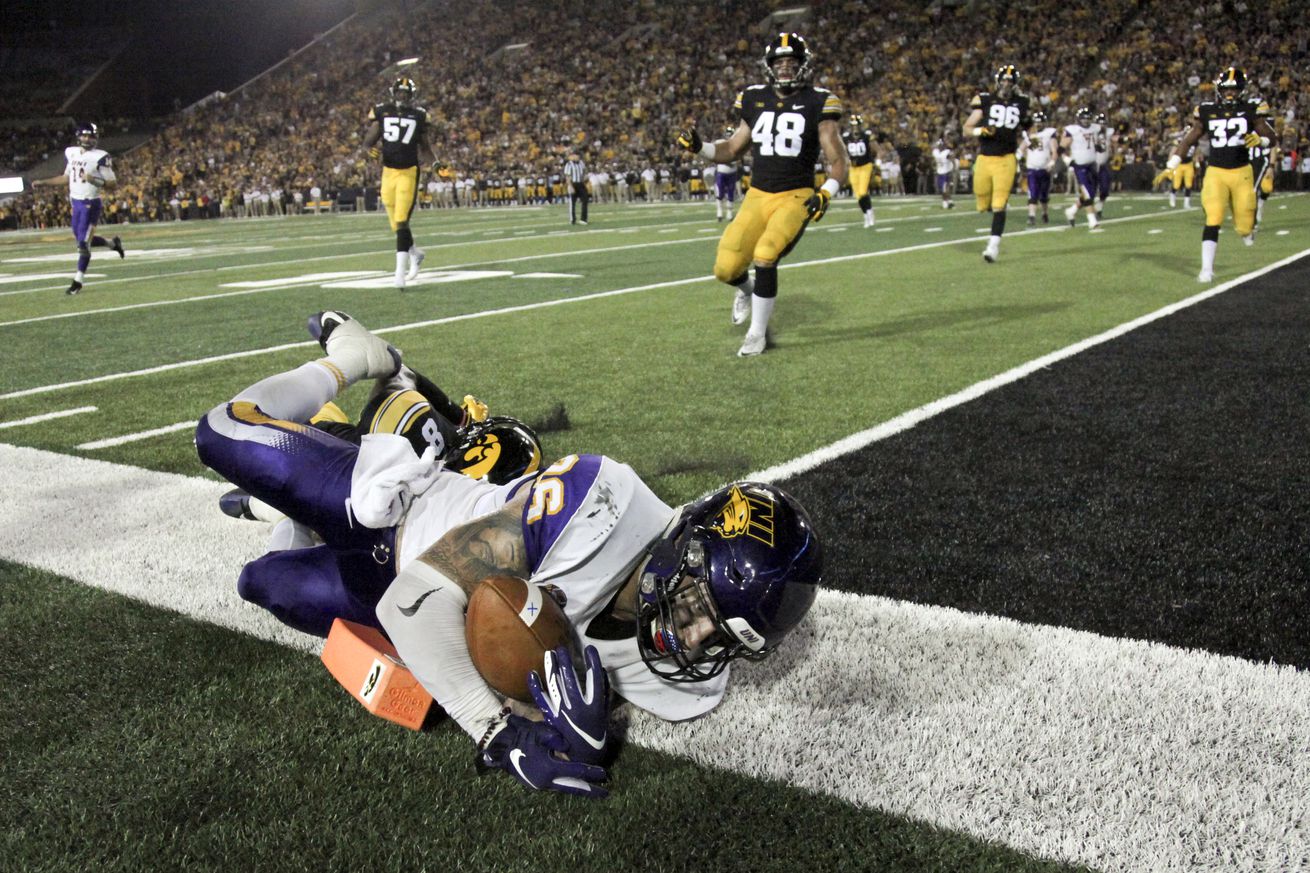 Perhaps the most underrated transfer arriving this summer was former Northern Iowa tight end Briley Moore (86), a seventh-grade teammate of Skylar Thompson’s who has the potential to become his new favorite target/Dalton Schoen replacement. | Photo by Matthew Holst/Getty Images

In which BracketCat counts down to the 2020 kickoff with a profile of Kansas State tight end Briley Moore.

KICKOFF. Fighting, ever fighting, for a Wildcat Victory! Go State!

He earned first-team all-state honors as a senior from the Missouri Football Coaches Association, and also earned all-district and all-conference honors after he helped the Jaguars to earn a perfect 14-0 record and a Class 6 State Championship in 2015.

Moore had 37 receptions for 672 yards and 15 touchdowns as a senior, and also lettered in basketball, starting for three years and leading his team to a state championships in 2015.

After graduating, he enrolled at Northern Iowa, where he played in 10 games as a true freshman in 2016, with his first career start against North Dakota State, a game in which he hauled in his first career touchdown.

Moore also had a reception in three other games, including the Montana contest, when he went for a season-high 36 yards.

Moore played in all 13 games in 2017, with 10 starts, pulling in 38 receptions for 494 yards to rank second on the team in both categories en route to honorable mention All-Missouri Valley Football Conference accolades.

Moore played in all 12 games in 2018, with 10 starts, leading the Panthers in receptions, receiving yards and receiving touchdowns.

He ranked sixth in the nation in receiving yards among tight ends and fifth in touchdowns.

He came away with a season-best five receptions against Montana, Iowa and Indiana State, and also had touchdowns against the Hawkeyes, South Dakota and Youngstown State.

Moore finally hit the first major adversity of his career in 2019, when he played in the season opener at Iowa State, but sustained a season-ending injury.

He still made four catches for 26 yards against the Cyclones before his injury, then earned a medical hardship for the 2019 season and now is classified a senior again in 2020.

Moore is currently locked in a fierce battle with returning starter/part-time fullback Nick Lenners for the starting nod at tight end today, but in the end, it doesn’t really matter — both will see a lot of playing time in two-tight-end sets in 2020.

But only Moore has the potential to be Thompson’s “Travis Kelce,” replacing Dalton Schoen.