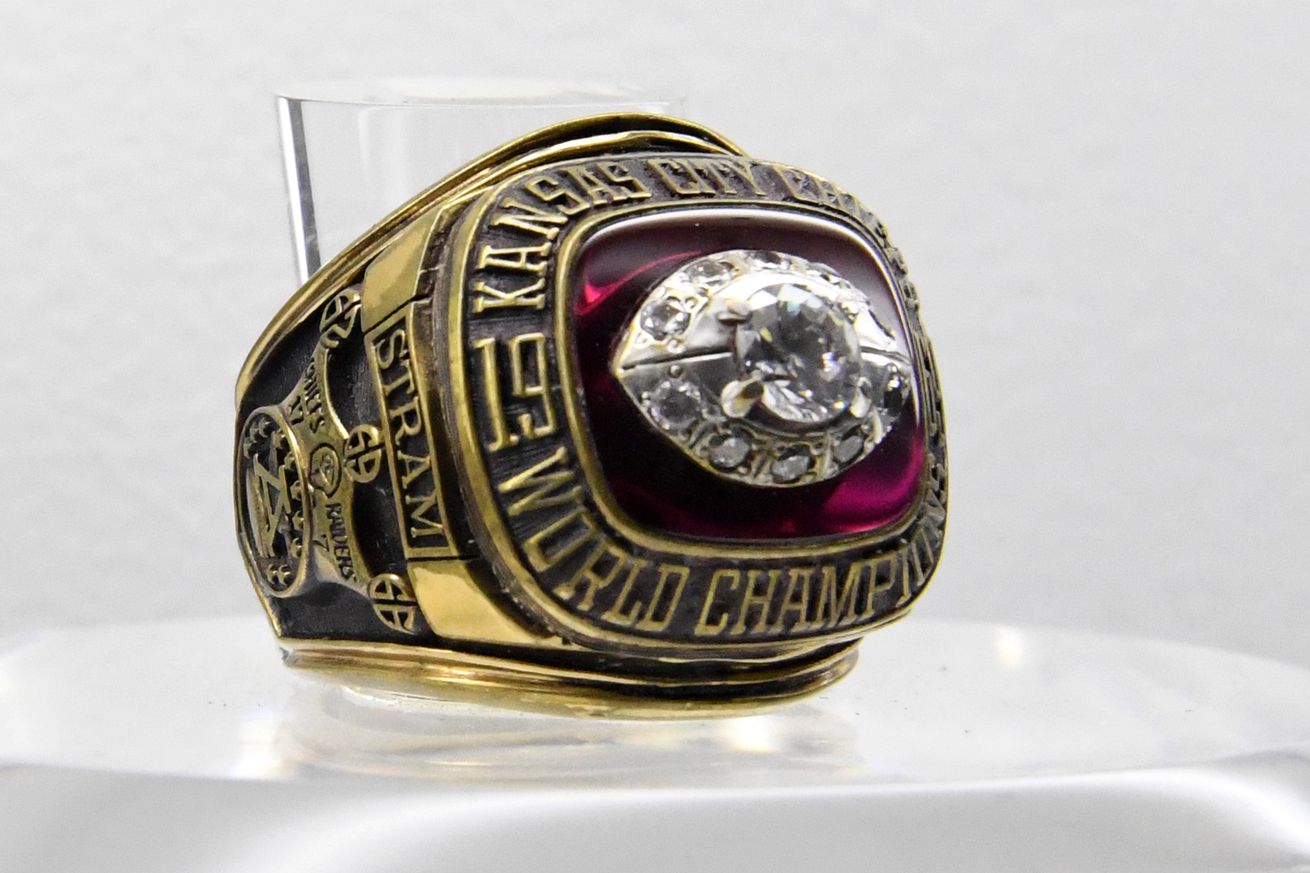 We don’t know for sure which Chiefs players, coaches and team employees will get Super Bowl rings — but we can make some educated guesses.

Since the Kansas City Chiefs won Super Bowl LIV against the San Francisco 49ers a week ago last Sunday, we’ve been besieged with questions about Super Bowl rings. Who gets them? When will they be awarded?

There are (almost) no league rules about championship rings. Who will receive them — and when and how they are given out — is entirely up to the team that wins the championship. And since the Chiefs haven’t given out Super Bowl rings for a while, there’s little precedent to guide us.

But here’s one thing we know: the team will award at least 150 rings. That’s the number of rings for which the league will pay. Until researching this article, we assumed that teams paid for their own championship rings. But it turns out that the NFL assumes this cost. This fact is listed under the general (but ever-expanding) category of Things-We-Didn’t-Know-Because-the-Chiefs-Haven’t-Won-a-Super-Bowl-in-50-Years — or TWDKBCHWSB50Y for short.

We learned this from a 2015 SBNation article on the subject.

The NFL pays for the cost of 150 rings for the winning team, with a [maximum] cost of around $7,000 per unit, depending on the cost of gold and diamonds at the time. That usually covers the bulk of people the team wants to gives the rings to, but it can go above that number if it buys the extra rings.

Does that mean that if a teams wants to award rings that are more expensive than the NFL will cover, the team has to foot the difference? Probably. According to a UK Daily Express article from 2018, that’s precisely what happens.

SBNation said that sometimes teams will also hand out different kinds of rings, too.

There’s not always information on this kind of thing out there, but there have been examples of teams giving “lesser” rings to front office staff or other non-coach, non-player personnel.

So where will the Chiefs draw the line? We don’t know. But we can make some educated guesses.

Obviously, all the players on the team’s 53-man roster at the end of the season will get rings. But it’s likely that any players who were on the active roster at any time during 2019 will receive them, too.

By our count, that could include as many as 66 players. That includes those like Tremon Smith, De’Anthony Thomas, Matt Moore, Gehrig Dieter and Joey Ivie — all of whom played in very few games and some who are now with other teams — along with Greg Senat and Jackson Barton, who were on the roster for a number of games but were game-day inactives in every one.

Recipients could also include players who never made it to the regular season due to injury. Breeland Speaks and John Lovett went on injured reserve during training camp. Both are still under contract through 2021 — and although neither played in 2019, you can make a case they should get rings — especially Speaks.

How about Felton Davis? He was released in the final cutdown and then placed on IR after clearing waivers. He’s also under contract through 2021.

Then there are players like Marcus Kemp and Keith Reaser — both of whom might have made the team, but went on IR before the season began. Kemp will be an exclusive rights free agent — he’ll likely still be tied to the team — but Reaser will be an unrestricted free agent. For players like them, the answer is less clear.

Then there is the matter of practice squad players. Anyone who has seen Rudy would likely agree that they’ve earned a share of the glory. It does appear that teams tend to give rings to practice squad players — but according to an article published by SFGate before the Super Bowl, a provision of the CBA allows teams to give them knockoffs.

If they’re on the practice squad when their team wins the Super Bowl, they get a ring. But the ring only needs to be “similar in appearance to the one provided to players on the Active/Inactive List” and according to the fine print it can be a ring of “lesser value.”

But what about the players who rotated through the practice squad during the course of the season? Should rookie punter Jack Fox — who spent a week on the practice squad when there was a question about whether Dustin Colquitt would be able to play in a game — get a ring? What about running back Marcus Marshall, who was with the team in training camp. was moved to the taxi squad after the final cutdown and released in early October? How about him?

So it’s hard to say how many players — outside of the team that traveled to Miami — will get rings. There will be some hard decisions for the Chiefs to make.

We have noticed some Chiefs fans are wondering if players like Jamaal Charles, Derrick Johnson and Dwayne Bowe — all of whom signed one-day contracts to retire as Chiefs in 2019 — might get rings. We’re not aware of any precedent for that kind of thing. While it isn’t impossible — who knows how generous the Chiefs might feel about awarding rings after going so long without winning a championship? — we would consider it unlikely.

Clark Hunt will get one — because it’s good to be the King. It’s hard to imagine Lamar Hunt’s widow Norma won’t receive one, too. And we can be certain that the entire coaching staff — and front-office people like general manager Brett Veach, president Mark Donovan and head trainer Rick Burkholder — will get rings, too. But we don’t know how deeply the team will dive into the front office when deciding who will be awarded rings.

Personally, I will consider it a travesty if equipment manager Allen Wright — who has been doing the dirty work in the Chiefs locker room for 37 years — doesn’t receive one.

Some publicly-visible members of the Chiefs staff are likely to get rings — people like longtime radio play-by-play announcer Mitch Holthus and color commentator Kendall Gammon, along with preseason TV announcers Ari Wolfe and Trent Green. We are aware of some Chiefs precedent here; we know the late Bill Grigsby — who was color commentator on the radio team when the team won Super Bowl IV — had a Super Bowl ring.

As for a ring presentation ceremony, it’s likely one will be conducted. When the team won Super Bowl IV, the rings were simply mailed to the players — one of many bits of Super Bowl ring trivia you’ll learn if you look at ESPN’s fascinating gallery of all 53 Super Bowl rings. But in the modern NFL, it’s unlikely a team would miss an opportunity to conduct such an event. What it will be like — and when it will be — is now unknown. That said, it’s not likely to happen until sometime after the season begins; it takes a while to design and manufacture 150 (or more) custom rings.

Will we ever know exactly how many rings will be awarded? This also falls under the TWDKBCHWSB50Y. We just don’t know. We’ll guess that the team won’t ever issue a complete list — especially if it should include many team employees who receive “lesser” rings.

But the next time the Chiefs are handing out championship rings… we’ll have a better idea what to expect.