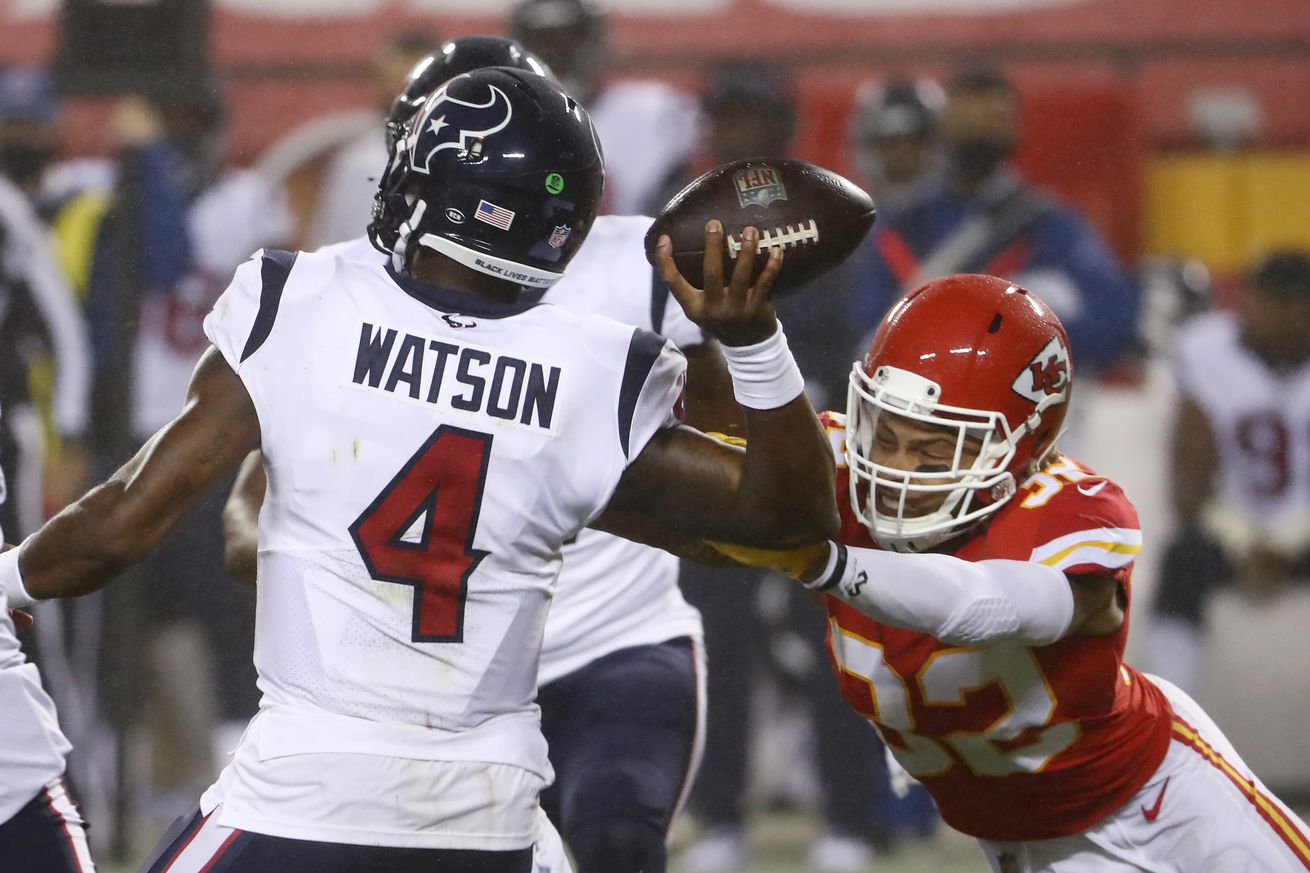 The leader of the unit sees room for improvement, even with some bright spots in the Week 1 win

Through the first three quarters of the Kansas City Chiefs’ 34-20 victory over the Houston Texans on Thursday night, the Chiefs defense stifled the Texans’ offense to only seven points and 215 total yards. They forced an interception and had accumulated two sacks as they entered the fourth quarter.

In the final 11 minutes of the contest, the Texans offense scored 13 points and totaled 145 yards against a defense with a comfortable lead and three players out. The excuse of garbage time and injuries weren’t enough for Chiefs safety Tyrann Mathieu — who expressed a higher set of expectations for his unit.

“I’m pissed off,” Mathieu proclaimed in his post-game press conference. “I felt like we played fairly decent, up until the last couple stretches in the fourth quarter, started giving up big plays, big chunks. Things that we weren’t necessarily doing throughout the game. In my mind, we have a lot more work to do. If we would’ve held those guys to seven points, it would’ve been a much better feeling. Those guys scoring 20 leaves a bad taste in our mouth. We got a lot of work to do. I’m looking forward to next week.”

Mathieu’s frustration for the defense’s performance was evident before the fourth quarter.

David Johnson is back

First TD of the season

You can see Mathieu throw up his arms and swing his fist as he watches Texans running back David Johnson score to put Houston up 7-0 in the first quarter. The big run looked to be executed well by the offense — but there were a few weak tackle attempts that propelled Johnson to the end zone.

The last defender to get his hands on Johnson was fourth-round rookie cornerback L’Jarius Sneed, who started at the second cornerback spot and looked like a rookie out of the gate. After settling in with a few drives under his belt, Sneed ended up having a very impressive game that featured well-positioned coverage snaps, passes defended and an interception that he returned 39 yards in the third quarter.

The first-year cornerback admitted that being anxious may have played a part in his semi-slow start.

“I was nervous when I first got out there, you know, just in my head,” Sneed told reporters after the game. “I trusted in my film studying over the week and my technique I’ve been doing all week, so I knew I was going to be all right.”

Mathieu acknowledged Sneed’s big debut, understanding how significant it is for a young cornerback to gain confidence.

“I wouldn’t say that I saw him having this day, but I did see the kid playing solid ball,” Mathieu recalled. “I did see him making tackles, making plays, but to have a night like this on primetime TV, the whole world is watching, all his family is watching. I’m just excited for him, happy for him moving forward.”

The biggest play by the Chiefs defense was Sneed’s interception in the fourth quarter to set up the game-sealing score — but it wouldn’t have happened without a great effort by Mathieu. Blitzing off of the right edge of the offensive line, Mathieu made an incredible move to escape the tight end’s block and get a hand on Texans quarterback Deshaun Watson as he threw.

“I’m just doing my job, trying my best to make an impact on the play,” Mathieu explained about the effective pressure on Watson. “A lot of what I do does not show up on the stat sheet, but I love to do it. I’m just happy he caught it, we left a lot of those interceptions just like that on the field last year, I think we dropped 10 or 11 as a group. To see the kid focus in, lock in, catch the ball and then show his 4.3 speed, I think that’s why he’s starting for us right now.”

Ironically, Sneed thought he would continue the trend from Chiefs defensive backs in 2019.

“I thought I was going to drop it, honestly,” Sneed admitted. “It was just floating. Those are the hardest balls to catch.”

As Sneed made plays, fellow starting cornerback Charvarius Ward didn’t have many impactful moments — until he had to leave the game with a hand injury in the second half. He was the best player at an already shallow position in terms of experienced depth.

“He’ll be a big loss for us. Lil’ Mooney,” Mathieu noted. “He’s played big for us, even going back to last season, he’s someone we count on tremendously, just to play man-to-man, press on each and every play. Everybody on our defense is a starter, I think that’s how our coaches coach and us as players, that’s how we practice. As if, at any given moment, somebody could step up, have to go in the game, and make a big play.”

There isn’t confirmation that Ward will miss games, but a fractured bone in the hand of a cornerback that needs to press and be physical with wide receivers is going bother the player. His inability to be at his best could naturally bring down the overall performance of the unit.

The Chiefs defense deserves credit for a good game in Week 1. They kept Houston at seven points until the game was out of reach — but Mathieu believes they didn’t play to a particular standard. That’s a leader making sure his teammates aren’t complacent with one win and challenging them to improve in the next 10 days before Week 2.