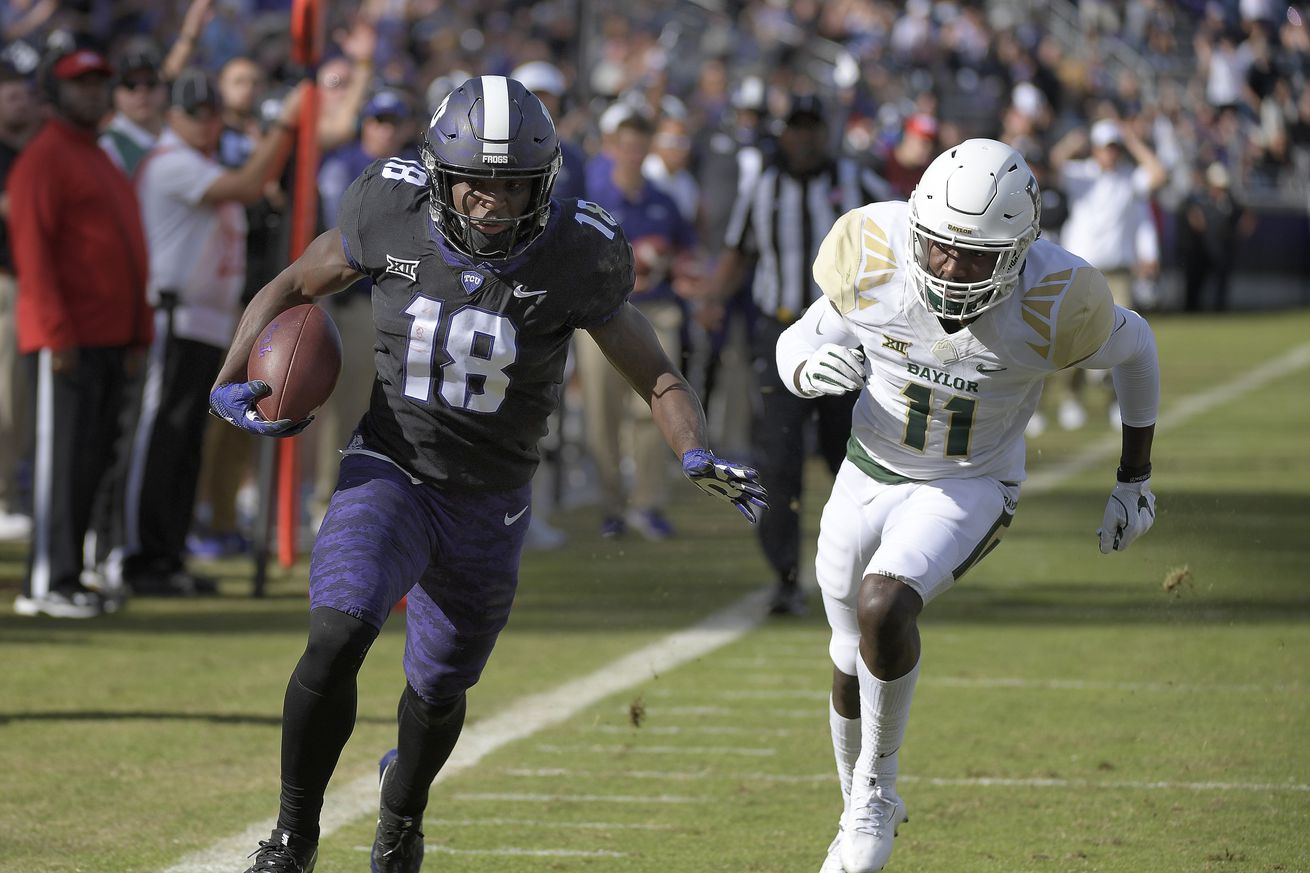 When it comes to speedy receivers at the NFL level, Hill is the player prospects look to replicate.

TCU WR Jalen Reagor, a speed demon, said he’s had 15 formal interviews so far, tells me he has sat down with Chiefs. Reagor also tells me he has a relationship with Patrick Mahomes and they’ve worked out together in the past. Reagor said he see a lot of Tyreek Hill in his game. pic.twitter.com/yjIKP4fft8

And that makes sense — Reagor could be the fastest player in the draft, and in his first combine preview on Monday, our own Matt Lane listed him as his top expected combine performer at wide receiver.

Reagor told reporters he is a mix of Hill and San Francisco 49ers wide receiver Deebo Samuel, and he hopes to run a 4.2 40-yard dash. A Hill-Samuel hybrid would equate to one of the most dangerous weapons in the league.

Reagor added he hopes to talk to Hill — who ran a 4.29 at West Alabama’s pro day back in 2016 — after he runs his own, hinting that he may beat that number.

Said he hasn’t spoken with Hill yet personally, but smiled and said “I hope to after I run my 40.”

NFL Network draft analyst Daniel Jeremiah touched upon the Reagor-Hill comparison when he talked to media members on a conference call last Friday.

“With Reagor, he’s somebody, I think one of the things people are trying to find in this draft is your version of Tyreek Hill,” said Jeremiah. “He’s not as fast as Tyreek Hill, but he’s going to run in the 4.3s, and he can take the top off coverage. You can use him on the jet sweeps, get the ball to him in the flat and just let him go. He can play over the top. The knock on him, he’s got a good number of drops. So he’s got to clean that up.”

Jeremiah later added that a better comparison for Hill might be Alabama wideout Henry Ruggs.

“I think he’s going to absolutely fly,” said Jeremiah. “Everybody knows it’s coming. He’s still going to do it. I think the second number will be a two. I don’t know what the third number will be. But he’s the closest thing to Tyreek Hill that I’ve seen, since Tyreek Hill entered the league. And just looked like he’s been on a different speed than everybody else. This kid does the same thing.

“He’s so sudden off the line of scrimmage. It’s instant death for corners. He’s just by them and it’s over. You can use him on the jet sweep stuff. You can use him on kickoff return. I love watching him as a gunner on punt. Shows just how tough he is.”

Wide receivers are scheduled to run the 40-yard dash on Thursday at 3 p.m. Arrowhead Time (full schedule). Reagor and Ruggs are shaping up to be the players to watch.