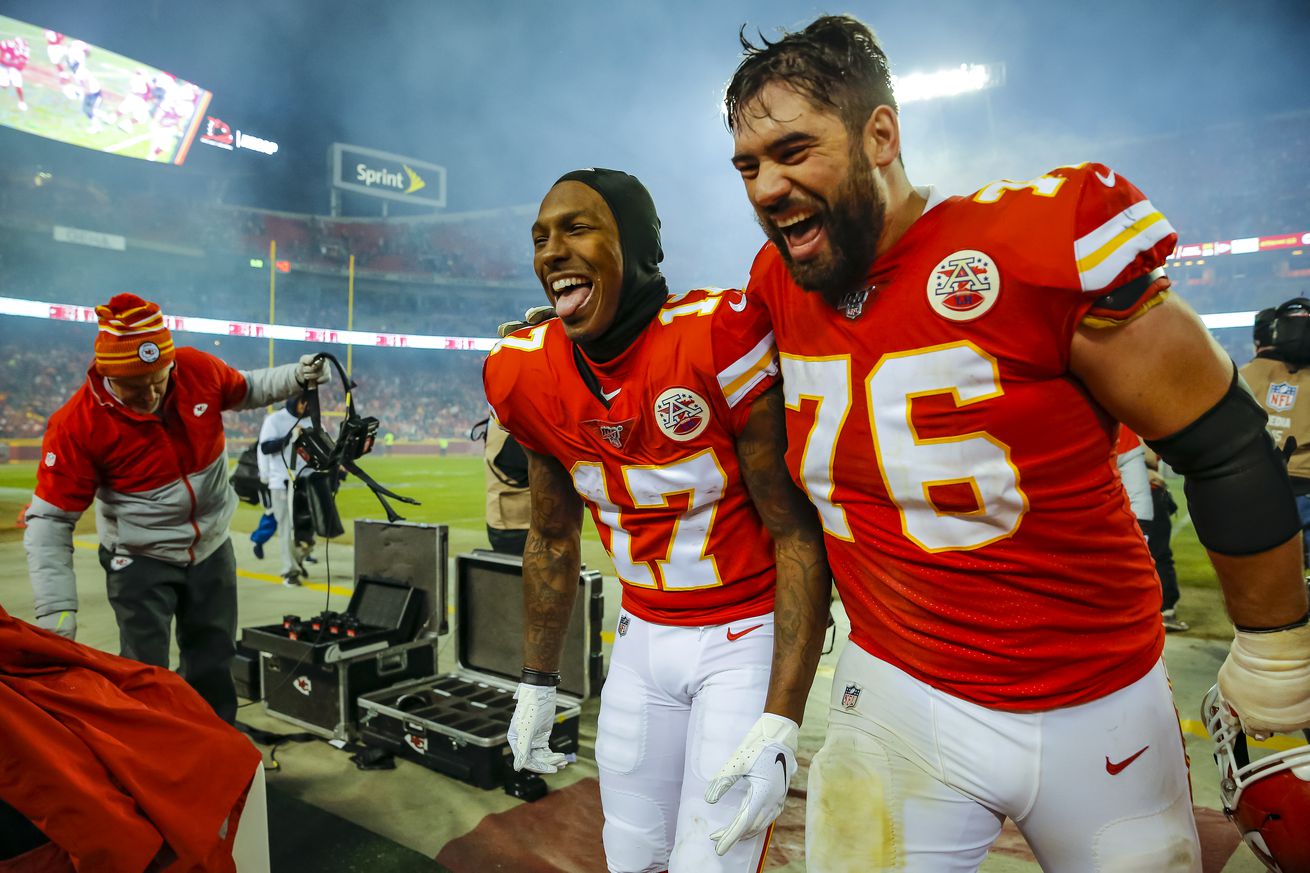 The Chiefs released an outtake from the team photo session in Miami… and Twitter had a blast with it.

On Tuesday afternoon, the Kansas City Chiefs tweeted a photo that got a lot of Internet reactions. We have learned that it was taken in Miami the day before the Super Bowl — presumably in the same session where the official Super Bowl team photo (which we have not yet seen) was taken.

So much going on in one photo pic.twitter.com/4OdVFHJ2kU

Indeed… there is a lot going on in this photo.

Some noticed resemblances to other famous poses.

It’s unclear how a 24-year-old pro quarterback knew about Burt Reynold’s centerfold for Cosmopolitan that was published 47 years ago — but just like a 60-yard pass, Mahomes nailed it anyway.

Among the public, reactions to Mahomes’ pose differed widely.

@PatrickMahomes @Chiefs Great picture, going to hang it on my office wall soon. But sorry Patrick…..I think Coach Reid should’ve been laying down in the middle in that pose

But based on their reactions in the photo, his teammates were all-in.

Cheetah is looking at Shurmur like, “Dude, we told you to be cool. You can’t just pet Pat like that.”

Many wondered where head coach Andy Reid was.

Shouldn’t Andy have been invited?

Maybe he was just late to the photo session.

I noticed coach Andy isn’t in the pic. Everyone messing around until the boss shows up.

Of course, there were conspiracy theories that needed to be considered.

Fell off the back row. pic.twitter.com/uX7h0L7bvH

But some of the clues to Reid’s potential whereabouts were more obvious.

I may have figured out the wheres Andy Reid mystery. He just entered from off to the left of the photo… pic.twitter.com/PkGAolSngK

It’s possible he was there all along.

Or as Occam’s Razor would suggest… the simplest explanation might be the most likely.

He took the pic!

Reid wasn’t the only one who appeared to be missing.

This is precisely why Watkins is so successful in the postseason. Defenses just don’t look hard enough to find him.

Fair warning: “Ba-by Shark, doot doot do doot do doot” is about about be stuck in your head all day.

Clark: “In order to think like a shark, you got to BE a shark”… Wilson over here with the pencil.✍ pic.twitter.com/zE6b4aafQn

Some players already had their game faces on…

…or whatever face this is.

He aint having it all. pic.twitter.com/KWvVXXyXbr

But after enough seasons, game faces are a little tougher to manage.

Spagnuolo might not be Captain Morgan… but you’ve got to respect a mature man who can rock the no-socks look. After all… on Twitter, there’s always room for constructive criticism of fashion statements.

When you and your friend show up at the party in the same outfit and have to spend all night pretending not to notice pic.twitter.com/PwZpsfp4Cj

The fact that numbers were sometimes represented twice — because practice squad players were being included in the group shot — threw some other people, too.

Look at the face number 20 is making, lol. Not that one, the other one.

Some suspicious activity was noted.

There was additional evidence for HisDirkness’ belief, too.

Hahaha DOD and Keizer both blaming each other like — bro wtf?

But Internet jokesters aside, one reaction told the real story.

This photo is perfect, it shows all the players and coaches personalities. Very true to the team!!

The photo clearly shows the team Andy Reid has always sought to have: a group of individuals who create a team identity that still allows their personalities to show — so they can still have fun playing a kid’s game.

The next day, they became world champions.