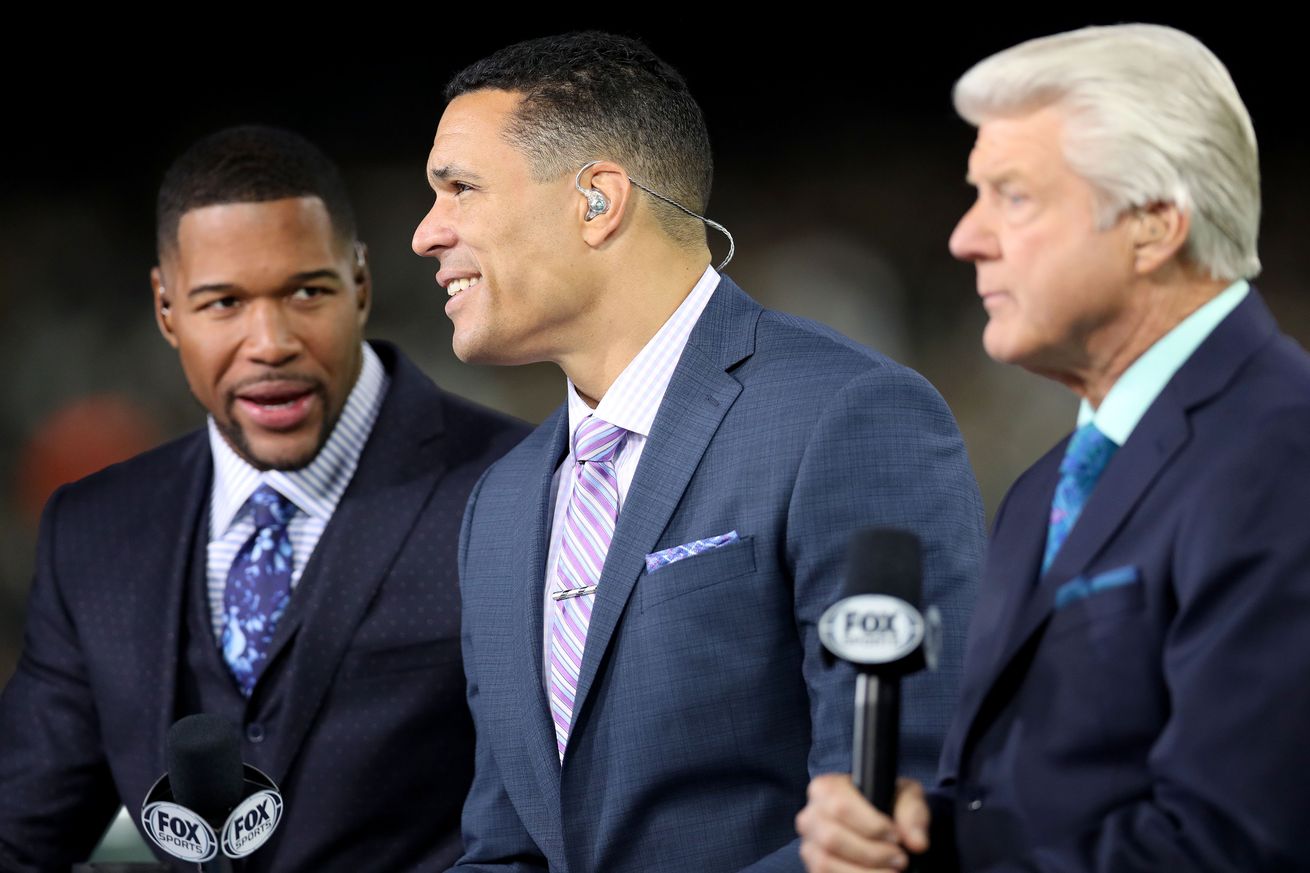 In a podcast with Mike Tyson, the NFL anchor spoke of the Chiefs Super Bowl win, his time with the team and his continuing struggle to find the best in himself.

In a recent episode of the “Hotboxin’ with Mike Tyson” podcast, former Kansas City Chiefs tight end Tony Gonzalez spoke about the team’s Super Bowl win and the challenges he has faced as an NFL game-day anchor after retiring from football seven years ago.

“I was happy as s—t,” Gonzalez told Tyson and co-host Eben Britton of his former team’s championship win. “I was there. Obviously we worked it for FOX. I was on the sideline. I didn’t move the whole time. Remember… it’s been 50 years since they won it. I played there 12 years — and we couldn’t get it done. So I was there — and they won and the confetti dropped.

“I had this feeling of like — so happy! Obviously, it wasn’t me; I know I didn’t win the Super Bowl. But it’s like watching one of your kids win, I guess; that’s the only way I can compare. Like, you’re really happy for them. Even though I didn’t win it, part of me won it. So I guess I’ll take 75% feeling like it. But it was good to see them win.”

Gonzalez also spoke at length on subjects we’ve heard him discuss before, detailing how he learned to love football — and apply himself to being great — once he had been with the Chiefs for a couple of seasons.

But the Hall of Fame tight end also said that for him, the journey to find the best version of himself still continues — as demonstrated by his time working as an NFL anchor at CBS.

“I was scared,” he recalled. “I was scared to show who I am in front of the camera. When that red light’s on, there’s millions of people watching — and I was scared. I had a hard time with it. I never felt like I was really myself. I always apologized to people from CBS. ‘Thank you for my opportunity, but you never really got to see me in front of that camera.’ It was because I was afraid.”

Still, Gonzalez said, CBS was happy enough with his performance to offer him a contract extension — which was almost finalized one day as he sat across from his wife at a cafe in Spain.

“She was like, ‘Hey, is the deal almost done?’ I’m like, ’Yeah, it’s pretty much done.’ And she goes, ‘Are you happy with it?’ And I like… paused. And I started crying. She said, ‘What’s wrong with you?’ I said, ‘I don’t know. I feel like I’m about to have an anxiety attack — like if I signed the contract.’

“First of all, I was away from my family. I would have to travel three days a week with those four kids — all in the house. I was like, ‘I don’t like being away from them. I don’t think I am myself on this show — for whatever reason. It’s just nor working for me.’ And that’s kind of when life took off for me again.”

Despite the fact there were no other anchor jobs then available, Gonzalez took a chance by walking away from CBS. It was a moment not unlike the one he faced after his second year with the Chiefs.

“Rock bottom moments are good to me,” said Gonzalez. “I like it when I hit that — because that means I’m challenging myself. I’m asking questions. I’m not avoiding that s—t. I’m going to do it anyway.”

And then… a position on the FOX anchor desk appeared.

“It’s funny how life opens up,” Gonzalez reflected. “One of my quotes is, ‘Life takes off on the other side of fear.’ Once you can go through it, it’s funny how the universe — life, whatever you believe in — opens up to you and says, ‘Yeah. There you go, son — or daughter. You did it. Now I’m going to reward you for that. Because you were afraid to to that — and most people are afraid.’ That’s where you want to be. That’s why you want to be in uncomfortable situations.”

Gonzalez said that the atmosphere at FOX is better for him, saying that “It’s my vibe. It’s me.” In addition, the FOX studios are just 10 minutes from his home.

And he got to be on the sideline as the Chiefs won Super Bowl LIV.

Listen to the whole hour-long interview above or by clicking here. Warning: there’s plenty of profanity.