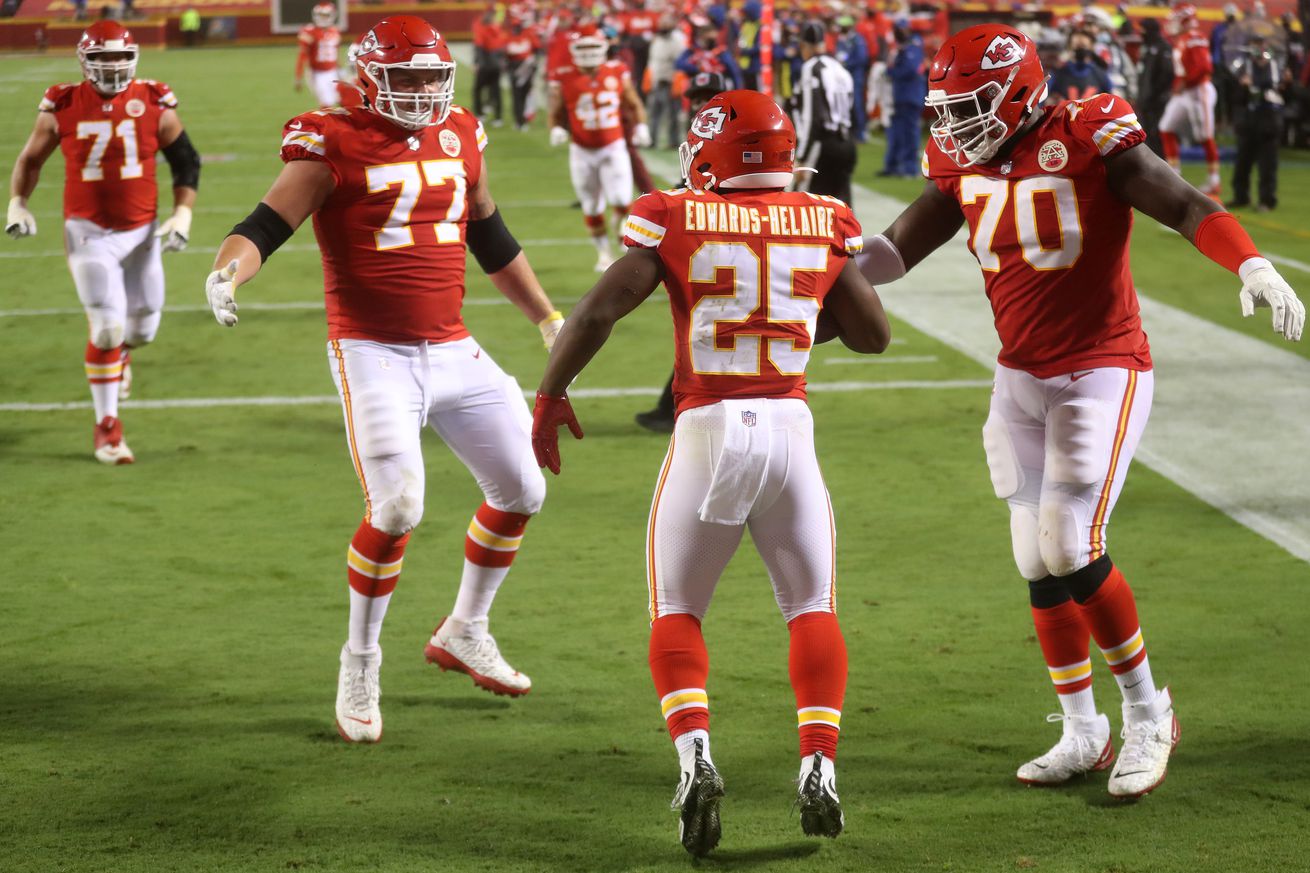 How did the mentality and performance of the interior offensive line change with a revamped group against the Texans?

One of the most exciting things to come from the Kansas City Chiefs dominating victory over the Houston Texans was something I’d have never expected to see pop on the screen this quickly.

Offensive line play is something that usually goes under the radar, but when you have the best player on the planet — Patrick Mahomes — anything that prevents him from playing at his best is often scrutinized. When you look at the offense around Mahomes over the last couple of seasons, the only things that seemingly stop him from playing at an MVP level are injury and poor offensive line play. And more specifically — the interior offensive line that has struggled to protect Mahomes and keep running backs efficient.

Entering 2020, the Chiefs made some changes to the offensive line and the prototype at the position as well.

Andrew Wylie has been a starter for stretches during both of the last two seasons, but he is now back on the right side starting at offensive guard. Austin Reiter is a constant at center, but a new addition is Kelechi Osemele starting at left guard.

Not only is Osemele the new member of the unit but his play style is also atypical for an Andy Reid offensive line, and that may be a good thing. Osemele — along with most other new additions along the line — is bigger, stronger and has slightly less mobility than players utilized in the past.

What does that mean in the grand scheme of things? Let’s look into that and check out how that played out against the Texans:

I will get to the actual performance of Osemele, Reiter and Wylie soon, but first a little detour needs to be taken. In 2019, the Chiefs had one of the lowest rates of inside runs in the entire NFL, and much of their inside runs came early in the season while using LeSean McCoy. Against the Texans, they increased their inside run rate by over 10% and nearly doubled the effectiveness.

Obviously, there is a difference in the player running the ball in rookie Clyde Edwards-Helaire, and we could easily make the case that he is a significantly better inside runner than Damien Williams or even McCoy. There is hardly debate there, but there also has to be quality blocking to get to that level of success.

The information above (from SIS DataHub) is just split into inside, off-tackle and outside without any extra context.

Last season, the Chiefs were one of the few teams still basing their run game out of outside zone rather than inside zone or the gap scheme equivalent, duo.

The reasons most teams operate with either inside zone or duo as their base are:

The Chiefs tried edging this direction two seasons ago in 2017 and at the beginning 2018, but injuries along the offensive line and at the running back spot sent them back to the heavy outside zone scheme.

It appears that could be changing to align the team with the rest of the NFL in 2020.

One game isn’t a big enough sample size to say anything for certain, but it’s notable that there is quite a bit of gap scheme runs and a high rate of inside zone runs.

Does this trend continue? My early guess is yes because the personnel on the roster seems to thrive with this usage. This week, we are going to focus on the interior offensive line and how they were able to maximize production from these changes.

(Editor’s note: This article was written with limited access to the NFL’s All-22 footage. All analysis in this post came from the view provided by the broadcast, which is not ideal. We hope this problem is fixed for our coverage of Week 2’s Chiefs-Chargers matchup.)

This broadcast vantage point does not give enough context to paint a quality picture, but I still want to highlight Osemele, as I do think he’s vital to the change in run scheme and the success the Chiefs found from it.

Watching Osemele climb is a work of art. He’s so strong and has such a great base, he can re-direct a DL on a combo allowing the post blocker to close the gap and connect.

Once free, Osemele locates scraping/mirror LB’s downfield and rolls his hips into that contact. pic.twitter.com/Qc1HaN4OaR

It’s easy to see how Osemele could be credited for changing the scheme of the Chiefs’ rushing attack this season. He’s incredibly powerful and is at his best working vertically off the line of scrimmage.

On this play, we see that Osemele is a force. He brings a level of a physicality the Chiefs’ line has been missing under Reid. He has the power to dislodge defenders out of rush lanes. When he’s digging players out the line of scrimmage, he has a great feel for when he can generate movement — pushing defenders out of the gap. He rides the defenders’ momentum, creating a cutback lane when necessary.

No A22 nearing a week after the game, okay fine

Kelechi Osemele was fantastic (from what we can see) as a run blocker vs Houston, esp on the inside runs. The power, control, and explosion off the LoS is great but the ability to feel his leverage is just as good pic.twitter.com/1ZAFS1md2n

Osemele has plenty of functional athleticism to climb vertically to the second level and connect onto linebackers and even work at a 45-degree angle and cut off some back-side linebackers. He doesn’t have the most flexibility through his hips to work around on some longer reach blocks, and knifing defensive lineman can slip under him.

On the goal line, the Chiefs had some difficulty gaining ground, and on some of the runs, the issue appeared to be the lateral movement out of the offensive line. Osemele had a few plays in which he just wasn’t able to slide laterally quickly enough to displace his man, as the Chiefs were asking him to zone step rather than drive block the nearest defender.

Without jumping the gun too early on a single-game sample size, this Chiefs’ entire blocking scheme on run plays could see an entire overhaul this season.

It will be worth monitoring all season, but the percentage of inside runs form the game against the Houston Texans well surpassed any season for the Chiefs under Reid, including the Kareem Hunt years. In the preseason of 2018, the Chiefs flashed a lot more power run concepts than they had utilized during the previous seasons, and I was excited to see it come to fruition in the regular season. A series of injuries to the offensive linemen and running back positions may have delayed that, and personnel dictated a return to the outside heavy scheme.

In this single game against the Texans, not only did the Chiefs run inside far more often and effectively than years past, but they also changed up their overarching running scheme. The inclusion of more gap/man run plays is a fun changeup that could really take off with the new personnel. While all three interior offensive linemen can play in any scheme, Osemele is a picture-perfect guard for an inside zone and gap-heavy run scheme, and he showed why in this first game.

It’s early in the season, but this is something to keep an eye on going forward. The Chiefs should have a more consistent and diverse run game, and watching Osemele open up lanes for Edwards-Helaire could be something special as the season goes on.