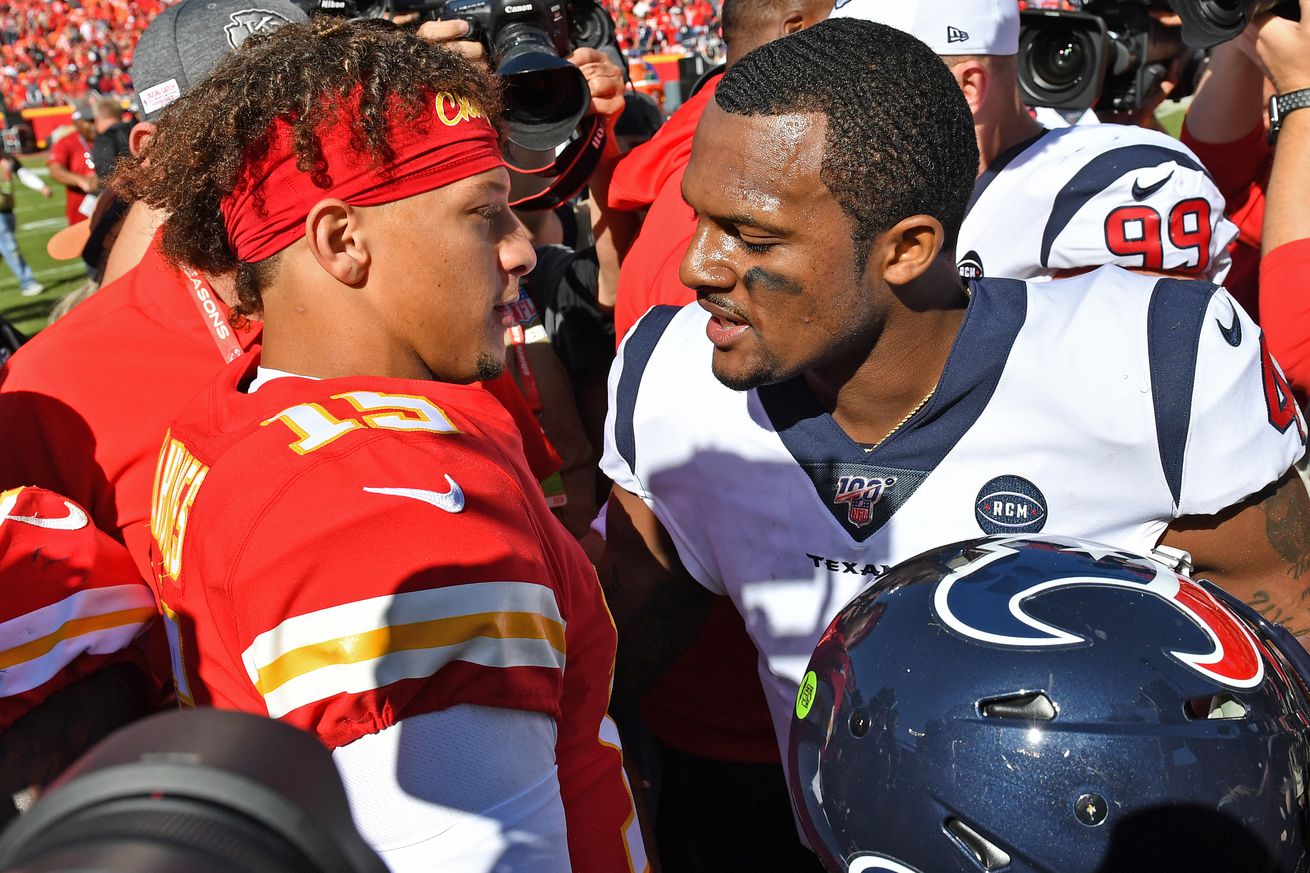 The Arrowhead Pride staff weighs in with their predictions for the first game of the 2020 NFL season.

The Kansas City Chiefs begin their defense of their 2019 Super Bowl championship — and kick off 2020’s NFL season — against the Houston Texans at Arrowhead Stadium on Thursday night. Let’s see what Arrowhead Pride staffers think about the game.

The Chiefs kickoff their “Run It Back” Tour in style — picking up exactly from where they left off against the Texans. Patrick Mahomes will set about reminding the league that he is the world’s best player and go full-on Peyton Manning, throwing for seven touchdowns on opening night — two of which will end up in the hands of our Kingdom’s new favorite toy, Clyde Edwards-Helaire. Travis Kelce will eat once more against the Texans — and I’ll even throw in a score for Byron Pringle. The Texans will eventually grow into the game in the second half — but it will be too little, too late. Chiefs 47, Texans 27

The Chiefs beat the spread to open their title defense at Arrowhead Stadium. Patrick Mahomes and his offense will be firing on all cylinders, while Steve Spagnuolo’s defense will show that the second half of 2019 was no fluke. The 51-7 beatdown that closed out last year’s Divisional round game will certainly motivate the Texans, but it won’t be enough to beat a team that comes into 2020 with more advantages than it knows how to count. Chiefs 31, Texans 19

The Chiefs offense is completely healthy and fully prepared to blow the doors off whomever they play. The opponent just happens to be the Texans, who are currently on the bad end of a 51-7 scoring run by the Chiefs from the 2020 Divisional round loss. Patrick Mahomes and Andy Reid will put on a similar show, but the defense won’t give them the same cushion. Deshaun Watson will take advantage of a secondary that lacks experience at some spots and speed at others. Will Fuller, Brandin Cooks and Kenny Stills will make this a shootout. Chiefs 38, Texans 34

The Chiefs are simply better than the Texans at nearly every level and position. Even with the Texans looking forward to this game through the whole offseason, it won’t matter. When the Texans have the ball, it’s up to the Chiefs young secondary to keep up with the Texans’ speed in early downs, forcing Deshaun Watson into holding the ball — like he’s prone to do. Frank Clark — finally healthy — had a massive game against Houston in the playoffs, working against Tytus Howard and Zach Fulton on the right side. He should be primed to do it again. When the Chiefs have the ball, we’ve already seen the Texans struggle to figure out how to bracket both Tyreek Hill and Travis Kelce — which allowed Patrick Mahomes to pick them apart. The Texans will likely have to resort to zone coverage again — and rookie Clyde Edwards-Helaire should get some good looks against an average linebacker group. The game will get a little sloppy defensively, but the Chiefs offense has more continuity — and is simply better. Chiefs 34. Texans 21

With the offseason the Chiefs just had, my only concern is that they might come into this game too fired up. There are plenty of reasons for optimism on offense, with the team adding a dynamic feature back to an already potent group of skill players. The coaching staff will have six months’ worth of plays cooked up in Zoom meetings, just ready to unleash on the NFL. Expect some new wrinkles and creative design to stay one step ahead of Houston’s defense. But the story this week might be the Chiefs’ defense. Spagnoulo’s crew really came into their own in the second half of 2019 — and they’ll look to keep that momentum going on Thursday night. I think Mahomes and company might start slow before settling in, but Frank Clark, Chris Jones and Tyrann Mathieu will come out attacking, proving they are for real. In the end, the Texans won’t know what hit them. Chiefs 38, Texans 10

The Kansas City Chiefs start their “Run It Back” Tour with a rematch against their 2019 Divisional round opponent. While the Chiefs have kept their group largely intact, the Texans traded away their best offensive weapon for a running back. Brandon Cooks and Will Fuller are still a dangerous pair — but even with DeAndre Hopkins, the Texans couldn’t keep pace with the Chiefs; after a limited offseason, I don’t expect them to do so in Week 1, either. The Chiefs offense clicks — and the defense does enough for a multi-score victory. Chiefs 38, Texans 24

The Chiefs are currently on a 51-7 run against the Texans and will look to extend that on Thursday night to kick off the NFL season. I expect a sloppy game and some big mistakes leading to big plays. The Chiefs are better on both sides of the football — and will ultimately win this game comfortably. Chiefs 35, Texans 20

Defending against the Kansas City Chiefs offense had already been a tall order. The addition of Clyde Edwards-Helaire is going to make it a near impossible one. Last time the Chiefs faced the Texans, their start could not have been slower, going down 24 in the Divisional round. I anticipate the opposite Thursday night, with Kansas City jumping out to a big lead as the Texans struggle to get it going against a Chiefs defense that plays better than expected early given the absence of Bashaud Breeland and Mike Pennel. The Texans rally back in midway through second half, but the lead is too much to overcome. Chiefs 48, Texans 32

Just as we did last season, we’ll keep track of how each contributor does with their Chiefs predictions, posting the running total with each week’s picks. Spoiler alert: before the Week 2 game against the Los Angeles Chargers, everybody will be 1-0 — or 0-1. The point spreads will make the difference.