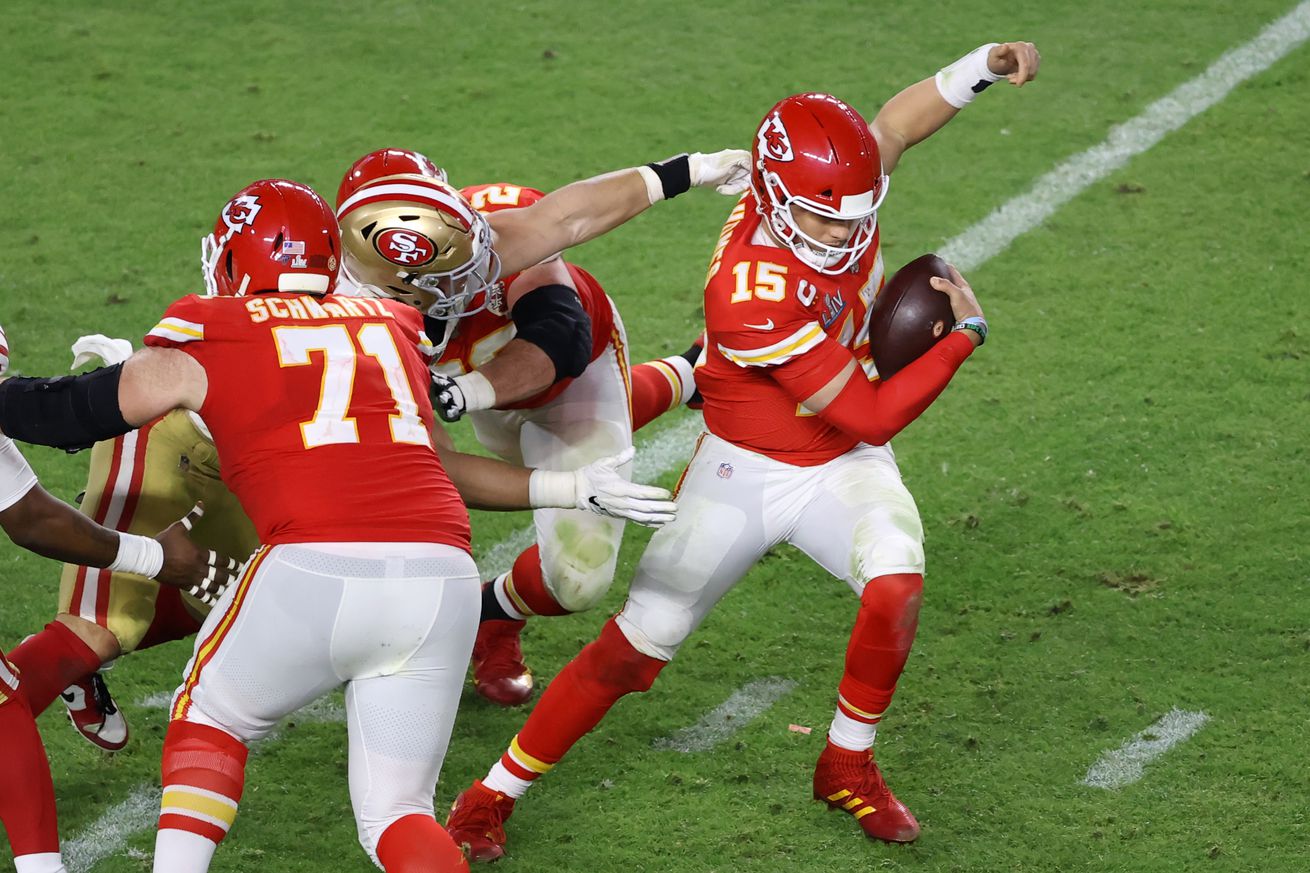 Let’s take a look at the Super Bowl MVP’s performance in the most important game of his life.

When you hear the word relentless to describe a football player, your thoughts might turn to the defensive side of the football. Most people envision a pass rusher with a motor that does not quit.

After watching the Super Bowl, you might think aboutNick Bosa. The rookie defensive end was living in the Kansas City backfield, affecting what felt like every other drop back. Bosa would have earned Super Bowl MVP if the San Francisco 49ers had come out victorious. Instead, that award went to Chiefs quarterback Patrick Mahomes — the most relentless force on the field in the season’s final game.

You’re never out of a game ever as long as Mahomes is your quarterback.

If you hadn’t learned that during the first-half comebacks against the Texans and Titans in the first two playoff games, you found out that it’s true even in the Super Bowl after a furious 21-0 run in the final six minutes and change. It’s uncommon to describe a quarterback as relentless. Watching Mahomes fight through contact — even initiate contact — to extend drives or finish plays showed the heart of a champion who now has a championship to prove that fact.

In the nine instances that Mahomes has lost, it has never been by more than a score. It takes a lot to kill a team led by him. When the Chiefs went down 20-10, you probably knew it would still be a close game. Even before the run started, the fight that drives that statistic was showing.

Patrick Mahomes has never lost by more than a score in the NFL. You’re always in a game, and you’re probably going to win most of the time. Small effort plays like this reveal the some of why he is great and you will always have a chance with him. pic.twitter.com/jdA2TdUxYB

Trailing 20-10 and facing a third-and-5, the Chiefs would have to punt if they could not move the chains. Early pressure as Mahomes gets to the top of his drop forces him to get out of the pocket before the receivers are out of their routes. As Mahomes rolls to his right, his ankle is swiped at by Bosa but he isn’t slowed down. Running out of space on the sideline with Arik Armstead and Deforest Buckner closing, Mahomes dives for the line to gain to keep the drive alive.

Much like his team, Mahomes was not going down easily. He fought through arm tackles, players at his feet several times throughout the game to extend plays. Between those and the big hits he took, Mahomes was a warrior for 60 minutes – mentally and physically. pic.twitter.com/gtddAY4UAN

Later in the drive, the Chiefs were behind the sticks on a second-and-19. The pressure again is quick and forces Mahomes to step up and run up and out of the pocket. On his way out, he breaks arm tackles of Armstead and Dee Ford and gains 13 yards on a scramble to make the third down a manageable six yards. The excellent effort to put the team inside the 49ers 25-yard line was ultimately wasted on the next play on an interception.

A play the Chiefs ran in last year’s AFC championship against New England sparked the entire comeback. On third-and-15, Andy Reid dialed up what we now know as 2-3 Jet Chip Wasp.

The play has Hill lined up as the No. 2 receiver in a 3×1 formation, attacking the middle-field safety vertically. Once the safety opens his hips to the boundary, Hill turns and runs a sail route away from the direction in which the safety opened up.

In the case of the Super Bowl, cornerback Emmanuel Moseley drives on the in-breaking route at the sticks by Sammy Watkins. There’s a window for Mahomes to throw behind the corner with the safety out of position trying to recover from opening his hips up. That is… if Mahomes bought enough time to get the throw off. Dropping for additional depth, he’s able to throw the ball over 55 yards in the air, getting hit on the follow-through. The uncanny arm talent afforded him the ability to drop deep to give this play a chance. An exceptional, got-to-have-it play to get out of another third-and-long would lead to a drive to cut the lead to 20-17.

The defense would do the job Steve Spagnuolo, Tyrann Mathieu and Frank Clark came here to do and gave the offense a chance to take the lead late. Mahomes and his group looked fresh. The 49ers — not so much. The offense was able to stay relentless and come up with key plays in the game-winning drive.

Nick Bosa was constantly making Patrick Mahomes’ life difficult, especially in the second half. He had to work through contact on this play to find Kelce and give the Chiefs a fresh set of downs on the game winning drive. pic.twitter.com/7GZk3bcgKl

With under five minutes remaining in the game on a second-and-5, Mahomes avoids disaster. Bosa again is pressuring after beating Eric Fisher off the edge. Mahomes steps up and fights through the sack attempt by the NFL’s defensive rookie of the year. Had Bosa held on, the Chiefs are staring at a third-and-long with time running out. Mahomes fights through the contact, keeps his eyes downfield and spots Kelce, who sat past the sticks and caught the ball for a first down. The 49ers may have pulled it out if the Super Bowl MVP doesn’t wrangle out the sack.

Sammy Watkins closed his excellent playoff performance with a massive play to put the Chiefs in the red zone on the game winning drive. Outstanding release, perfect throw. pic.twitter.com/Jusb1JJhTn

Two plays later, the explosive play the Chiefs needed on the drive came on an excellent throw by Mahomes.

Sammy Watkins deserves enormous credit for this play as well, with an excellent release off the line of scrimmage against Richard Sherman. When the boundary safety rotated to the middle of the field, Mahomes knew he had a shot with Watkins. It was a well-placed ball, hitting Watkins in stride with perfect touch. He’d get all the way down to the 10-yard line, setting up first-and-goal.

The San Francisco lead would be lost for good on third-and-goal.

The Super Bowl winner. The Chiefs love to get their running back crossing out of the backfield into the flat in the red zone. Hill action holds S a beat, Kelce creates space/traffic to free Damien Williams. Fittingly, Mahomes throws it over Dee Ford to win a world championship. pic.twitter.com/kw4cUuhuTX

It was excellent window dressing on a concept the Chiefs love to run in the deep red zone.

The play design is to spring running back Damien Williams free out of the backfield. They’ve run this concept with Williams, specifically several times over the last two seasons. To add layers to the play and hide the concept, Hill motions into the backfield and run fakes as if they’re running a stretch play with him. Williams crosses from field to boundary and into the flats. Kelce runs an inside release and through Sherman for depth to create space and traffic in the flat. San Francisco safety Jimmie Ward followed Hill across the formation, but on the run action, gets caught peaking and is late to run with Williams to the flat.

Kelce created enough space and made it difficult for Sherman to stretch to the pylon as Williams snuck in for the game-winning touchdown. Fitting that Mahomes lofted the ball over former Chief Dee Ford to close out the Super Bowl they were inches from participating in last season.

The Chiefs have the ultimate chess piece

Things changed in Kansas City on April 27, 2017, when Mahomes was drafted by the Chiefs. The organization finally aggressively pursued a quarterback. How much and how quickly things changed is nothing short of remarkable.

Even the biggest of supporters of Mahomes and the Chiefs’ move up for him didn’t expect the meteoric rise of the organization. Kansas City will get to enjoy one of the fiercest competitors in the world compete for championships year after year until he hangs them up.

After all the 49ers’ hand-me-down quarterbacks this organization has taken on over the years, Mahomes — the first homegrown first-round quarterback in over 30 years — ending a 50 year Super Bowl drought is the sweetest form of redemption.

Enjoy every minute of this experience. You deserve it, Kansas City.