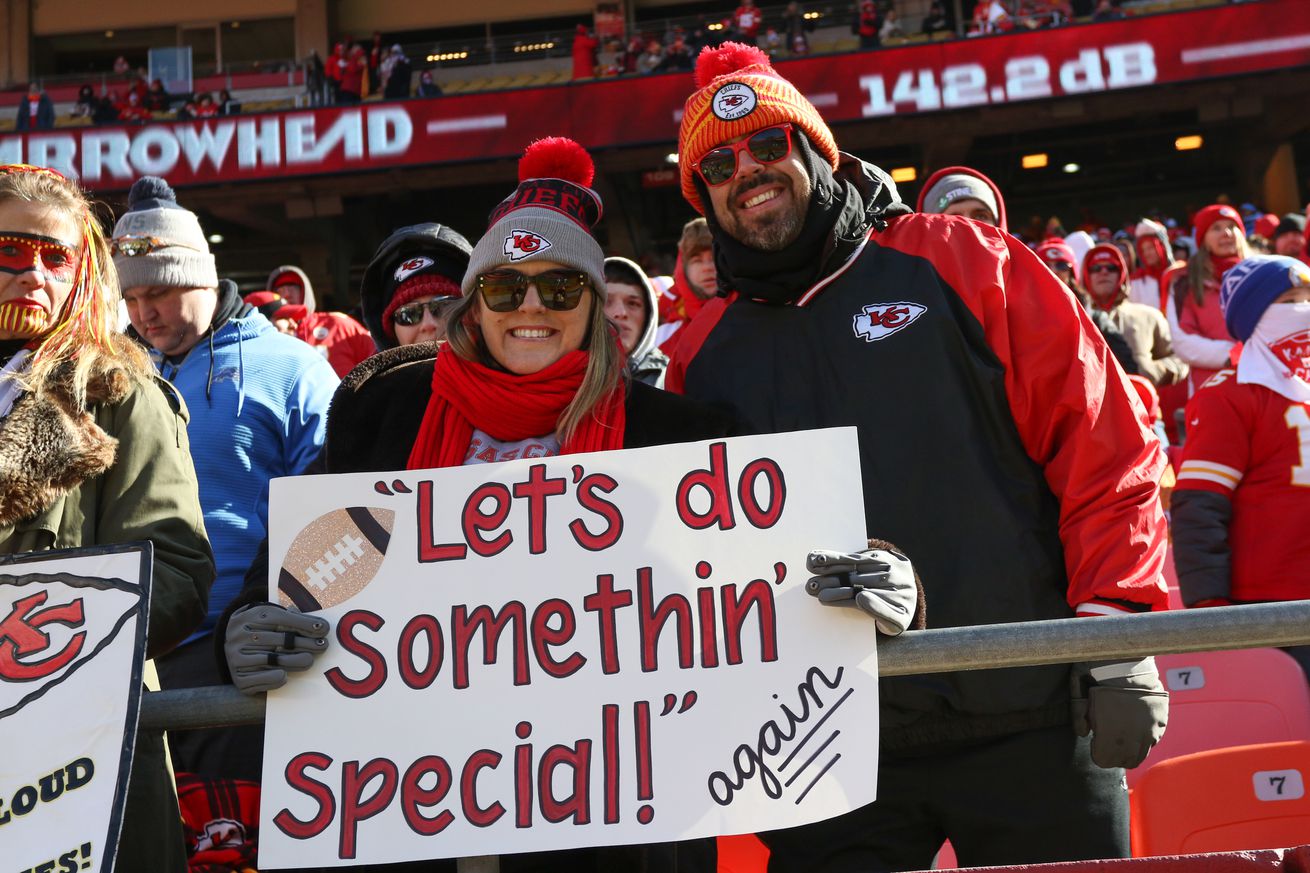 ‘Twas the night before Chiefsmas…

On the eve of the Kansas City Chiefs season opener against the Houston Texans, we asked our contributors to make their boldest prediction for the 2020 season.

Here’s what they said:

1. The Chiefs to go undefeated in games against AFC opponents

The Bills, Dolphins, Jets, Patriots, Ravens, Texans and the AFC West teams. These are the AFC teams the Chiefs will face in 2020. Now I don’t know the lines, but I expect that the Chiefs will be favored in all but two of these games – against the Bills and the Ravens. With the important matchups, the first thing you should look at when trying to decide a winner would be the coach and then the quarterback, especially in a year when the home environment will count for virtually nothing. Kansas City over the pair for my money. There will be some scares along the way, heck, even the Raiders might run the Chiefs close. But in a year when winning your conference games is more important than ever, the Chiefs will get the job done – going 14-0 against the AFC.

See what I did there?

2. The Chiefs will be top five in sacks and pressures in 2020

It took several games for Steve Spagnuolo’s 2019 pressure packages to get rolling, largely due to new personnel, installing a new playbook and injuries that took a toll on the pass-rush rotation. Even with all of that stacked against them, the Chiefs ranked 11th in sacks — just three sacks out of fifth place — and 14th in pressures through the year.

Spagnuolo has kept the majority of his personnel 2020, and both Frank Clark and Chris Jones look to take the field at 100% health in Week 1 of the season. I expect an even more aggressive set of pressure packages throughout the season and more production early out of the Chiefs pass rushers. The result should lead to a consistent pass rush all year long that vaults the Chiefs into the conversation of the best in the league.

3. Bashaud Breeland doesn’t get his starting spot back

In a weird year in which teams will have to trust their players to do the right thing constantly to ensure their availability, it’s been a rough start for suspended cornerback Bashaud Breeland. Brought back at a low figure, Breeland is sitting out the first four games, leaving the door open for rookie cornerback L’Jarius Sneed to earn the starting spot before he returns.

Sneed will get the chance to show a developmental arc that could intrigue the Chiefs enough to keep one of the heroes of the Super Bowl from getting as many snaps as he did last season. If the rookie takes big steps over the next four weeks, it makes sense for the organization to keep running a long-term solution out there. If that happens, Breeland has no one to blame but himself.

4. The Chiefs will average 40 points per game, breaking the single-season NFL record

The Chiefs offense came close to the all-time mark of 37.9 in 2018 when they averaged 35.3 points per game, but I believe they’ll shatter it this year. The lack of offseason work for NFL defenses will only help a Chiefs offense that has an unfair amount of talent and continuity. I believe the offense will come out firing on all cylinders – like how most seasons under Andy Reid begin – and the potential early-season woes for the Chiefs defense force the offense to score even more.

It does come down to health. Last season, the total season numbers for the offense were obviously down due to injuries to Patrick Mahomes, Tyreek Hill, and others. If the stars of the unit can stay on the field, I believe we will see a historic season from the NFL’s best offense. I’m expecting multiple 50-point games — maybe even one with 60?

Ever since Reid arrived in Kansas City, he’s had trouble finding a good left guard for his offensive line. Jeff Allen, Mike McGlynn, Ben Grubbs, Zach Fulton, Brian Witzmann, Cameron Erving, Andrew Wylie (and a bunch of other players) have failed to stick at the position — or due to age or salary considerations, couldn’t stay with the Chiefs for more than a season or two.

Ironically, it turned out that right guard Laurent Duvernay-Tardif’s decision to opt out of the 2020 season presented the opportunity the Chiefs needed. By picking up Osemele — who has spent most of his career on the left side of the line — the Chiefs could move Andrew Wylie to the right side, where he’s played better.

To be sure, Osemele — now 31 — may only have a season or two left in the tank. But he’s been a more-than-solid player in every one of his eight NFL seasons with the Baltimore Ravens, Las Vegas Raiders and New York Jets. His presence could end up solidifying both sides of the line for at least the 2020 season, giving the Chiefs time to figure out which of their young offensive linemen can eventually step into his spot.

Chiefs Hall of Fame running back Priest Holmes owns the team’s scrimmage yards record with 2,287 back in 2002. That total included 1,615 rushing yards and 672 receiving yards.

I have agreed with the widespread notion that Clyde Edwards-Helaire was in for a highly-productive rookie season for a long time. The night the rookie was drafted — before Damien Williams knew that opting out of the 2020 season was an option — I wrote on these pages about how the Chiefs’ drafting of Edwards-Helaire made the offense even scarier:

“He’s going to come in right away and pick up this offense quickly,” said Veach. “I always worry about the complexity of our offense and just about how long it will take guys, when the coaches feel comfortable, but everyone that you talk to at LSU, they rave about his football character and his football IQ. And then you throw in the talent that he has with that. We think he can come in right away and be a big factor in this offense.”

The high praise continued throughout the conference call, and at one point, Veach went as far as to call Edwards-Helaire a “franchise-type running back.”

Edwards-Helaire isn’t just a dynamic weapon for Reid; he is what Reid might design at the position in a video game. The dual-threat rookie accumulated more than 1,800 yards from scrimmage in 15 straight wins at LSU playing against the best competition college football has to offer.

Now he is playing with the best quarterback (and perhaps tight end and wide receiver) in the world, and there is no better coach in the league to maximize his skill set. The rookie breaks the franchise record as part of one of the greatest offenses the NFL has ever seen.

Everything is lined up for the Chiefs this season, with the “Run It Back” strategy working perfectly in a world where other teams will struggle to catch up. Last season, Mahomes didn’t win MVP or Offensive Player of the Year because of his injury-filled season. Now, as defending Super Bowl MVP, he’s got the opportunity and the reputation cemented, which will help him win both awards in 2020.

Clyde Edwards-Helaire should be everyone’s favorite for Offensive Rookie of the Year, given his ability and fit within this offense. Damien Williams’ opt-out gives him the opportunity to touch the ball more than any other rookie, and he won’t disappoint. Willie Gay, Jr. will get some consideration for Defensive Rookie of the Year but likely won’t make enough splash plays to beat out Chase Young.

Tyrann Mathieu, Chris Jones and Frank Clark will all compete for Defensive Player of the Year — each has the ability and the motivation. This year might be the year of Frank Clark, though. He was the closer in the second half of the season, but he isn’t often mentioned in the list of elite pass rushers. That will change in 2020.

Of course, the individual awards will pale in comparison to the second straight Lombardi Trophy that the Chiefs will bring home.