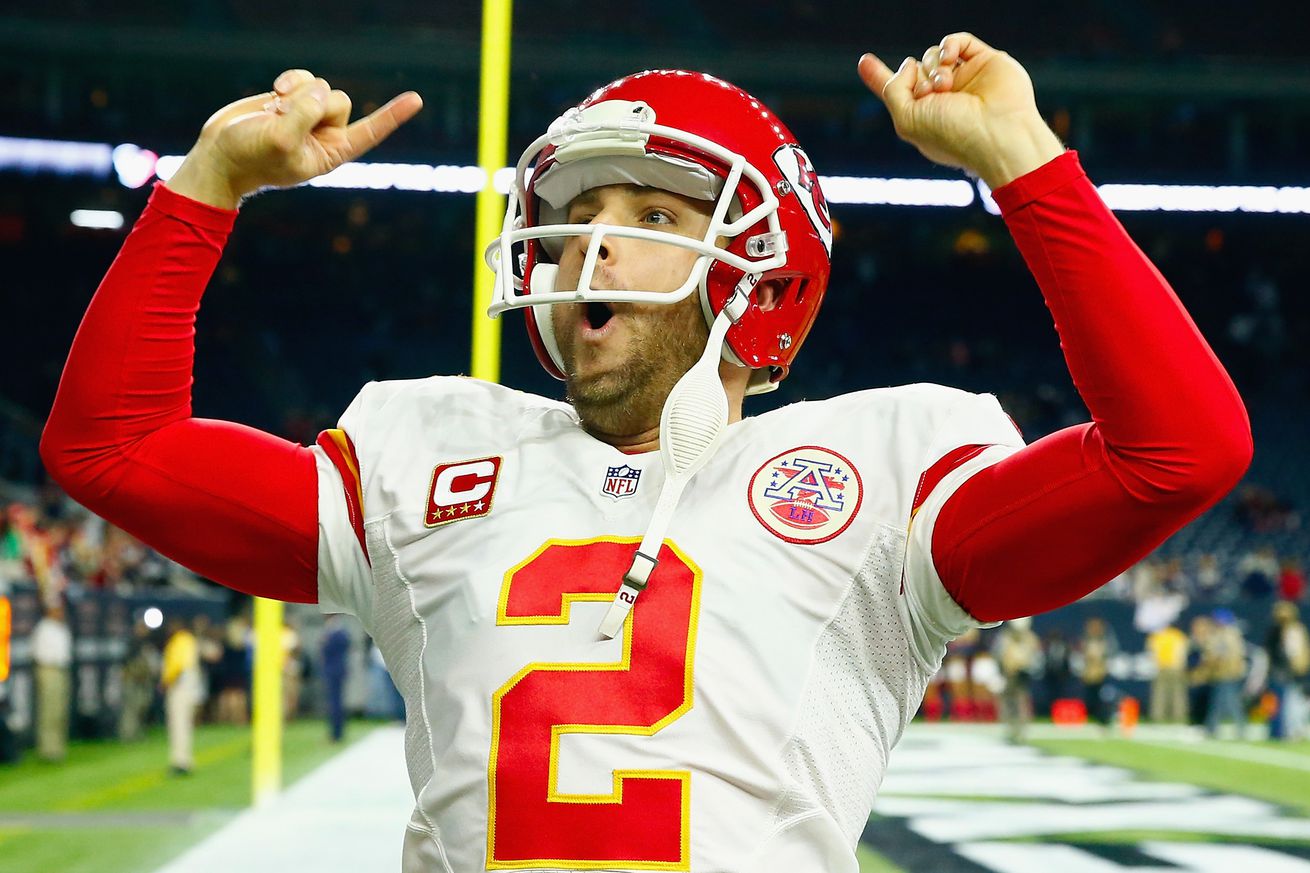 The team’s longtime punter has earned a special place in Chiefs history — and in our hearts.

One of my responsibilities here at Arrowhead Pride is maintaining our Kansas City Chiefs roster page. Today, that duty was very sad — because for the first time in 15 years, punter Dustin Colquitt isn’t on it.

In an emotional Instagram post that came to light in the early hours of Tuesday morning, Colquitt, 37, announced the team was releasing him.

“I have enjoyed my time in Chiefs Kingdom,” he wrote. “All things come to an end, sometimes sooner than you hoped, prayed and pleaded for them to.”

Selected by the Chiefs in the third round of the 2005 NFL Draft — the same year in which linebacker Derrick Johnson joined the team — Colquitt was not only the last remaining member of the 2013 squad inherited by head coach Andy Reid, but also the last who played for Dick Vermeil.

“In 2005, when me and Derrick came in here, we all got cards, which I still have,” Colquitt recalled in 2018. “It’s got a picture of the Lombardi Trophy, so the main thing is the main thing. I had all intentions of, when they drafted me in the third round, of staying here until that happens.”

And after a very long while, it did happen. After Vermeil, Colquitt ultimately played under four more head coaches: Herm Edwards, Todd Haley, Romeo Crennel and finally Reid, arguably becoming the greatest punter in team history. Chiefs Ring of Honor inductee Jerrel Wilson also spent 15 seasons with the team but played in an era where statistics we now use to evaluate a punter’s performance weren’t kept — and never did something that Colquitt has done for his entire career: hold for field goals.

“It’s always great looking back at years past where we’ve made it to the divisional round or first round of playoffs,” he remembered in 2018 as the team prepared for its first AFC championship game in 25 years, “and kind of how we’ve handled business or what we’ve worked on — and things that I can clean up in my game. That’s the biggest thing we’re focusing on: ‘How can we positively affect each game going forward?’”

At the time, Colquitt was more than happy to credit Reid for the team’s newfound success,

“A lot has changed in this building since 2013,” he said, “with coach Reid [and] coach Toub — guys that have become great friends, but also guys who have mentored you up and told you where you struggle, where you need to get better, and [they have] included family in that — which has been a great change to this environment.”

Colquitt was in a position to judge — not only because he had been with the team for so long, but also because he was one of those responsible for maintaining the team’s institutional memory from the last time the team was a legitimate championship contender — and everything that has happened since then.

When Colquitt joined the Chiefs, right guard Will Shields was still starting. Shields had been there for the 2003 loss to the Colts, along with the 1997 defeat at the hands of the Denver Broncos, the 1995 loss to the Colts, and, as a rookie starter, the 1993 loss to the Buffalo Bills in the AFC championship.

“It’s exciting that I got to sit across the locker room from 68 — Will Shields — for two seasons and got to pick his brain and see how he worked,” Colquitt said last September when he was on the brink of eclipsing Shield’s franchise record for games played. “For us to be tied right now, it’s exciting for my family and me. It’s cool that I can share this with him. I remember asking for his jersey in 2005 and he goes, ‘I don’t do jerseys until I’m done — that’s bad luck,’ and sure enough, as soon as he retired, he showed up and gave me his jersey — signed and everything — and I have it in my basement. I remember I didn’t have to ask again, either; he’s that kind of guy.”

At the time, Colquitt also fondly remembered his time with other great Chiefs players.

”I think Will [Shields] is big, but then you have Eddie Kennison, Tony Gonzalez — I remember riding on planes with him and he would downright tell you, ‘Don’t eat that steak. You need that fish. It’s going to make you better. If your body’s at a maximum level, then you’re going to play better.’ So that was big for me. When I came in, Lawrence Tynes and Kendall Gammon were here. He had 13 years of experience. I got to kind of pick his brain. There are a lot of guys that have come here. John Carney was here briefly. I got to really work on my holding there. I asked every question… he played 20-something years in the league. So I’ve just had a great influence [from] those guys.”

It is Colquitt’s willingness to learn from veteran teammates — and his attention to detail — that has made his career so successful.

“He’s just so consistent,” said special teams coordinator Dave Toub last season. “He’s such a leader for our football team. No matter who we bring in kicker-wise, he’s a kicker whisperer. I mean, he’s great — he’s a great holder. probably the best holder I’ve ever had — and I’ve had some good ones; Brad Maynard was really good at Chicago. He’s a student of the game. He’s just a great person to be around — a good family man — and a great teammate. A really, really good player. He wouldn’t be lasting this long if he wasn’t that good.”

But Colquitt always understood that it was a team effort.

“Sometimes in professional sports, you get that feeling when you spend enough time in it, which is what Brett Veach and Andy do — and all of our coaches for that matter,” he said in 2018. “All the way up to coach, they’re trying to figure out a way how to put this together so we could all have rings and make downtown red instead of blue.”

We couldn’t be happier that you were here to see it, Dustin. Wherever you go and whatever you do, you will always be in our hearts. Farewell, old friend.