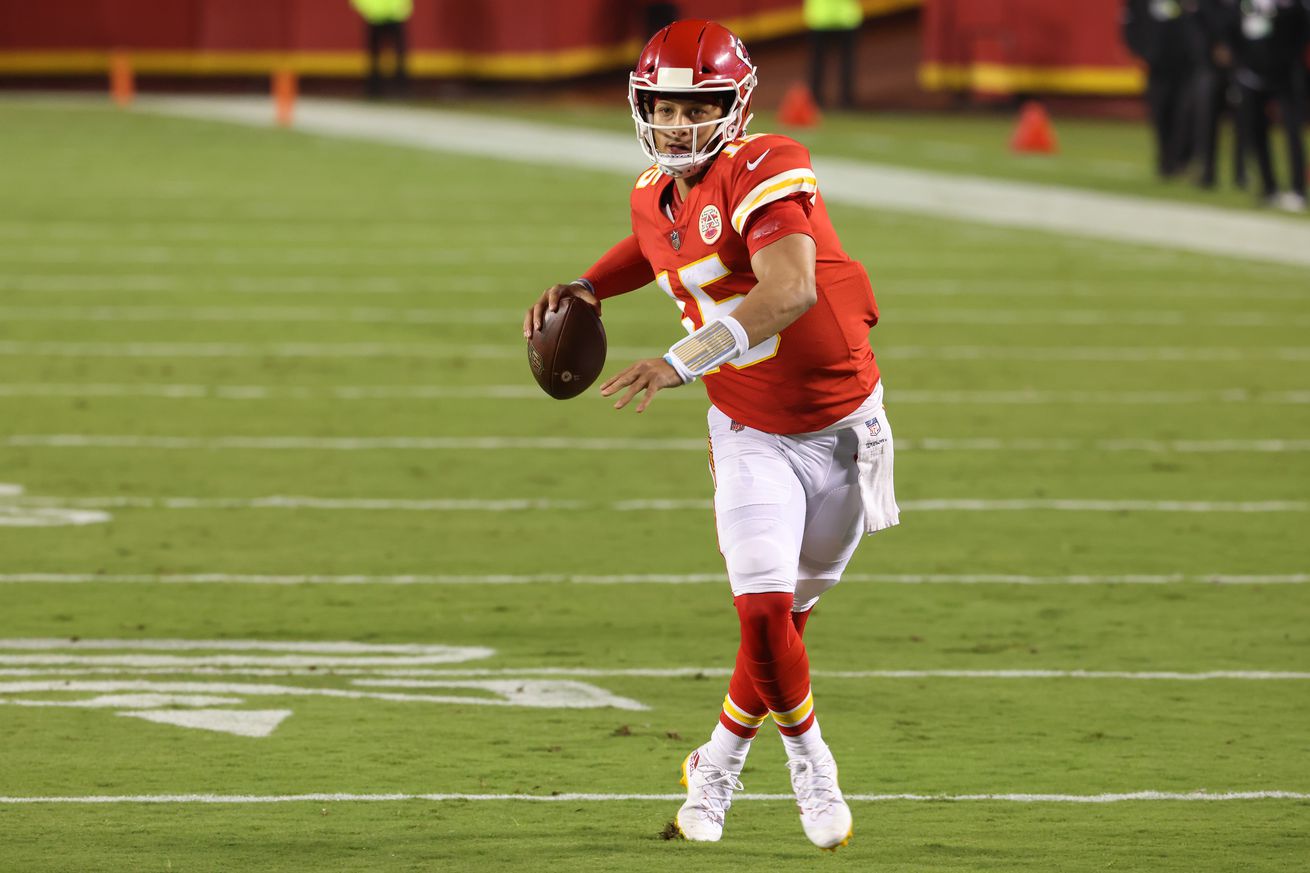 With the NFL’s All-22 film finally available, we take a closer look at the Chiefs quarterback in his first game of 2020.

If you felt like it was a ho-hum, business-like performance from Patrick Mahomes, you’re correct.

It was far from the flashiest performance we have seen from the reigning Super Bowl MVP, and that’s OK. In fact, you might want to get a little more used to it. No — this is not a commentary on the game script. I don’t think the Chiefs are just going to start running the football at the same clip they did against the Houston Texans, and I don’t think every game moving forward will be littered with quick, Alex-Smithian passes.

Patrick Mahomes got BETTER in the offseason.

“He showed some growth. Not that he hasn’t been good at it but he was even better Thursday night.” pic.twitter.com/mU8yJHGmXU

The point is that Mahomes doesn’t have to bail himself out with the kind of rare ability he possesses as much he did in his MVP campaign. Week over week, year over year, Mahomes is processing the game at a higher clip. The byproduct of that is not having to bail himself and his team out of missing a protection or play adjustment. Mahomes calmly drove down the field without much resistance from the opposing defense. This is what a mature Mahomes looks like. That’s not to say it will be boring — he’s still going to need to show us all the amazing things he’s capable of — but he may not have to draw from that well as often because he and the offense are operating like a hot knife through butter.

The receiving end of that is painful. The methodical drives provide just as much angst for defenses and opposing fans as the third-and-18 daggers Mahomes is known for. For Chiefs fans, it might be a little more — dare I say — boring, than what they have become accustomed to.

What isn’t boring is winning — and the Chiefs are going to be doing a lot of that regardless of what kind of Mahomes we get. He continues to raise his floor as a player (he has no ceiling) — which should terrify the league. Mahomes is getting closer and closer to bulletproof.

The final touchdown pass of the night for Mahomes was one of the few throws on the run we saw from him in Week 1.

Texans bring six with the Chiefs in five man protection. Mahomes extends the play long enough for Tyreek Hill to get across the field and he puts a good ball on the run to him for a touchdown. pic.twitter.com/uIpOMDAX5r

The Chiefs are in a gone protection (five-man protection with the running back free releasing out of the backfield), and the Texans are running Cover 0 pressure with straight man-to-man across the board. Mahomes is going to bail out of the pocket early in order to buy time against a free rusher. He’s trying to give receiver Tyreek Hill a chance to run across the field on an over route — and smartly runs the direction his receiver is working. Mahomes delivers a good throw to Hill, who brings it in for the first of what will be many touchdowns between the two in 2020. It was one of the few plays out of structure that Mahomes had to make the entire day.

Looks like a miscommunication up top, but Mahomes also had Kelce open underneath on the first down play. At worst, it’s a second and short. pic.twitter.com/g08grZp11K

This near-interception was likely a miscommunication between Mahomes and Hill, but there’s also an easier first-down throw available to Mahomes underneath. Travis Kelce is open for a good gain on a much easier throw than the one attempted. Regardless of if the communication wasn’t great between quarterback and receiver, the ball didn’t have to be thrown into risk. Working down to Kelce would have put the Chiefs in a minimum of second-and-short.

You have seen this play covered a bunch of different ways, so let me try to add something about this play that hasn’t been said. Let’s talk about what made Mahomes comfortable throwing this ball in such a tight window beyond just the ultimate trust in Kelce.

I know this play has been talked about a lot already, but I’ll try to add something that I haven’t seen mentioned yet: as soon as LB #41 Zach Cunningham goes to collision Demarcus Robinson at the goal line, Mahomes knows he can pop it behind him. Once extended he can’t recover. pic.twitter.com/jw0FHLk9mB

The key for this play is the back of Zach Cunningham. As soon he extends to collision Demarcus Robinson at the front line of the end zone, Mahomes knows he can fit the ball into Kelce. His positioning has taken himself out of a chance to contest the pass if Mahomes delivers it on time. Sometimes, amidst all that congestion, a small indicator like that is all Mahomes needs to feel confident firing the ball. Quick processing by Mahomes gets the job done for the first of many touchdowns this season.

The first-quarter touchdown drop from Demarcus Robinson was brutal — but the throw was outstanding.

This is an outstanding throw from Mahomes. The FS is sitting on top of Tyreek Hill, leaving a one-on-one for Demarcus Robinson against safety Justin Reid. Slowed him down before the back-line. A shame it was dropped. pic.twitter.com/poAKn2867W

The Chiefs didn’t get opportunities to take shots down the field, but they missed one on the first drive of the season. Houston is playing Cover 1 (man coverage with free safety help deep). The middle field safety is determined to stay on top of Hill on his vertical. This leaves Robinson one-on-one with a safety and a man who never wants to have to face the Chiefs again — Justin Reid. As he should be able to against a safety, Robinson stacks Reid, and Mahomes gives him a chance to make a play with a shot downfield. Mahomes does a great job of getting the ball up and over the corner, but slowing him down enough that he’s not having to worry about the back line and has ample space to get his feet down. The problem on this play was not on the quarterback — there wasn’t much more he could have done.

This play isn’t going to get the national attention others have already, but this is a very nicely executed throw from Mahomes.

Really liked this switch-smash concept by the Chiefs off a PA sprint. Mahomes has to hold the ball a beat for Watkins to clear the contact at the top of his route. pic.twitter.com/xg132aNaZm

The Chiefs are going to dial up a play-action sprint out for Mahomes. The pass concept he’s running to is called a “switch smash” — the receivers are crossing (switch release) at the line of scrimmage. Where Hill would normally run that corner route of the smash concept, because of the switch release, he is in the flat. The outside receiver — Sammy Watkins — is now running the corner route.

Mahomes shows good patience in waiting for Watkins out of the break. He looked ready to throw it a touch early based on the shoulder twitch but holds the ball for a beat to throw the ball on time to Watkins for a nice completion on a second-and-7 in the third quarter.