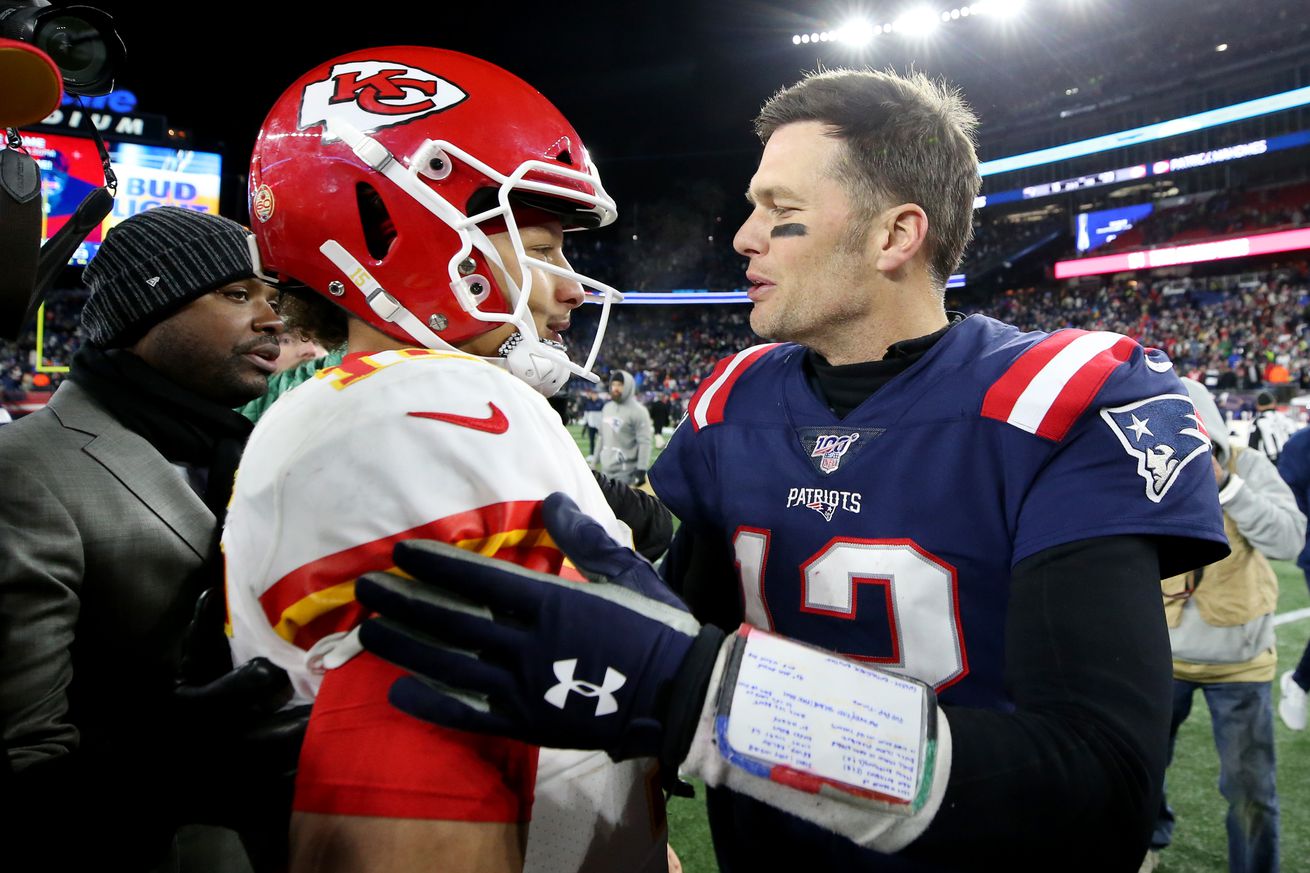 About to go LIVE on @instagram at 7pm ET for the @CoorsLight Happy Hour to talk with you guys about the Draft and football in general. Very cool to be joined by the man @PatrickMahomes who will be my guest. Big fan of his game and how he carries himself!Hope you can join us at 7!

From the sound it, Coors Light sponsored their chat by donating to the 15 and the Mahomies, the quarterback’s foundation dedicated to improving the lives of children.

An update on his offseason

The last time we heard from the Chiefs quarterback and Super Bowl LIV MVP in a press conference format was the day after the Super Bowl before heading to Disney World. He also spoke at the championship parade and appeared on HBO’s “The Shop.”

But this was the first time we have heard from Mahomes (other than on social media) since the coronavirus outbreak. Mahomes is currently spending his offseason in Texas — his home state.

“I had to build a weight room,” said Mahomes. “We didn’t have a weight room in the house yet, so we went out and got dumbbells. We actually got a barbell now and free weights. I’ve had to do these workouts at the house in kind of a spare room… Brittany (Mahomes’ girlfriend) is a trainer, so she keeps me going, and she’s able to get the best out of me even when I didn’t necessarily know how to work out at the house. So a lot of high reps. I’m the guy that’s usually the heavy and low-rep guy, but she’s making me do a lot of sets of 20 and stuff like that. And that’s been the main thing.”

Mahomes added he has been able to do cardio by simply running around his neighborhood.

“You’re still able to run around the neighborhood as long as you keep a safe distance from people,” said Mahomes. “And so I’ve been able to do that — running, kind of keeping the hood on, trying to stay as low-key as possible. Just getting as much in as possible. It is different, but you have to find a way to do it if you want to keep trying to go out there and win football games in the end.”

Through social media, we’ve learned over the years that Mahomes enjoys watching sports as much as he enjoys participating in them. So it was no surprise that Mahomes had watched the new ESPN special on the 1997–98 Chicago Bulls, “The Last Dance.”

“He was a big Michael Jordan fan, and so I got to watch the highlights from when I was 5, 6, 7 years old. Highlights of old games and stuff like that. I had an understanding — I’ve watched it, but to see the background behind it, to see how much hard work and dedication that he puts in. You hear about it, but that mentality that he has of treating every single practice like it’s a game and never taking a day off.

“You see why [Jordan’s] the best to ever do it, and he’s a guy that — he doesn’t take anything for granted. That’s the thing that I really took from it. To be that talented, to be on top of the game for that long, that still put in the work every single day. I can’t wait for the next episode to come out and I’m going to make sure I’m watching every single minute, every single second of that thing.”

Mahomes has learned over the years that it pays to work like Jordan. At the college level, quarterbacks look over at the sidelines for a sign or get one or two words before they need to make their play-call.

In the NFL, offensive coordinator Eric Bieniemy is in Mahomes’ ear on every play.

“I was so bad at it at first — just because I had never heard it before,” said Mahomes. “The first thing that I do now, and I still do it to this day, which is crazy to think about it — I go and write every single one of them down. Every single play that’s on the game plan or we’re going to have the next day at practice, I write them all down, then I say them in that order. I write it down how it comes into me, and then I say it like I would speak into the huddle. It is a challenge for every quarterback. I don’t care — whoever comes. You come into a new system, you have to find a way to spit that thing out as quick as possible.

“You start taking a long time in that huddle, you get out of the huddle, and you only have five seconds to look at what the defense is doing. And so I’ve gotten really good with writing it down. Now when they call plays, when he starts the play, I already know what the full play is just because I have it memorized and we’ve done it so much.”

A change of plans from college to the NFL

By now, everybody knows that Mahomes’ father being a professional baseball player helped him grow into the poised athlete he is today. But the best player in the game of football said he didn’t always want to play football.

“Baseball was 100% my main passion,” said Mahomes. “All the way growing up, I played basketball. I played a little bit of football — not a lot of it. To me, the plan was, ‘Let’s play everything you can. Have fun with your friends and then when you get to that age, I’m going to be a professional baseball player.’

“I was talking about this with my dad the other day. Even when I went to college, and I had a chance to get drafted out of high school, my plan was, ‘Hey let’s go play three years of football in college and go back to the MLB.’ It wasn’t until after my sophomore year of football that I really decided.”

Mahomes said that year was an eye-opener, given that he threw 15 interceptions that cost Texas Tech some games. He knew needed to become better at decision-making.

“Coach (Kliff) Kingsbury came up to me and said, ‘I’ll never tell you not to play something, and I know you’re supposed to go play baseball, but I think if you really focus on football for one offseason, you’ll get drafted.’ I was like, ‘Man that sounds good to me.’ So I focused in and ended up getting drafted in the first round.”

Tom and Gronk in Tampa

The most significant move of the NFL offseason happened recently when Tom Brady left New England to join the Tampa Bay Buccaneers.

Then he turned his attention to Wednesday’s news.

“I did not expect Gronk to come back,” Mahomes laughed. “When it happened, I could see. You realize the dude’s 30 years old and loves playing football. A lot of guys need to take that year off, and you’ve seen it more recently with Marshawn Lynch and Jason Witten — all these guys. They get that year off, and you have that itch. You want to go back and play football again. I know it was good for him, he knows the quarterback, great relationship, and they’ll be a team that you’ll have to watch for.

“They’re going to go out and do good things. They have a tough division. I always [feel] with Tom Brady that he’s going to win football games. We play them next year — it will be a great game. We play them down in Tampa, so hopefully, we’re able to do that (given the climate).”

The date and time is yet to be announced

Mahomes is now two months from winning the Super Bowl against the San Francisco 49ers in Miami, so the Instagram chat afforded him an opportunity to recall the entire day from start to finish.

“It was different than anything I’ve ever experienced before,” said Mahomes. “That’s the best way you can explain it. I’ve played in a lot of different football games, a lot of different stadiums. The buildup to it — you get two weeks where you’re just all focus on one team and so you’re really focusing in. Trying not to do too much, but trying to do enough to prepare yourself. You practice in a whole different facility. We were practicing at the Dolphins place, and you have to get used to their locker rooms and going out and practicing in the humidity and everything like that. Then the game. The national anthem — I think it was Demi Lovato out there singing — and it was awesome. And then the pregame. You run out of the tunnel and then you have to sit there for 15 minutes, where usually you run out, and you’re about to go and you’re ready to go. So you kind of manage your emotions. And then the game in itself.”

Mahomes acknowledged the fact that in the fourth quarter, Hard Rock Stadium sounded like a Chiefs home game.

“It was great to see — I think we had 60 to 70% of the fans, all the Chiefs kingdom that was down there. It was cool to just be a part of it. We got down — it definitely didn’t go our way for three quarters, but to make that run at the end of the game… I remember even when we were up at the end of the game, I was still trying to focus in on doing whatever it took to win the game. And then you win it, and it’s just mayhem.

“You go for like three days straight — you celebrate with your team. You’re on the field. You don’t want to leave the field because it’s such a great moment. And then you go back to the hotel and you celebrate with your guys. And then I got to go to Disney World right after that on like 15 minutes of sleep. And so it was just amazing, and then right into the parade. The whole experience is something that… you could never put into words because it’s something you just have to be there and do it, but it was something that I would hopefully love to do again.”

Herbstreit told Mahomes he’s sure he’ll get another opportunity.