A cryptic tweet in January set the wheels in motion for the Kansas City Chiefs to trade for left tackle Orlando Brown Jr., but really this trade has been a lifetime in the making.

It all began with his father, Orlando Brown Sr., who played 13 years in the NFL as a right tackle. He was never an All-Pro and never went to a Pro Bowl, though, at one point he was among the highest-paid offensive linemen in the game. During his father’s time in the league, there was a stigma surrounding the right tackle position. They weren’t the best, most athletic and most dominant offensive tackle on their team. That spot was reserved for the left tackle.

That stigma still lingers to this day. Chiefs fans need not look further than former starting right tackle Mitchell Schwartz and his lack of recognition as evidence of it.

“Growing up in my household, left tackle was important,” Brown Jr. told reporters on Monday. “My dad understood the magnitude of the position, the magnitude that it brings, often being the captain of the offensive line often being one of the better players on offense. It was just so important to my family— it was so important to him. As to why? I can’t really say why. I just know that often your right tackle, he can be a good player, but often the left tackle is getting a lot of love or a lot of credit — a lot more respect and credibility.”

While left tackles are traditionally paid more money, Orlando Brown Jr.’s desire to play left tackle wasn’t about the financial aspect of the game. Instead, it was about a boy honoring the wishes of his late father.

“This has nothing to do with finances,” Brown Jr. said. “This has to do with the opportunity to play left tackle. I grew up, my father playing in this league for 13 years as a right tackle. He was a defensive tackle, converted to right tackle. In my household, if you weren’t playing left tackle, I’m not going to say he disowned you but he kind of talked bad to you. Growing up, there were countless stories I could tell you. One of them being my freshman year in high school, they didn’t think I was ready to play left tackle so they wanted to play me at offensive guard. My dad went to the coach and told him straight up, ‘Hey, if you’re not playing him at left tackle, play him on defense.’ So I played defensive tackle my first year.”

Brown Jr. has defied expectations since entering the NFL. A horrendous performance at the 2018 NFL Scouting Combine left him in a state of free-fall ahead of the 2018 NFL draft. He tumbled to the third round, where his dad’s old team selected him. The Ravens were reluctant to start him as a rookie, even though he outplayed their veteran starter at right tackle in James Hurst. In Week 6, he got his first opportunity to start and never gave it up.

But this opportunity was on the right side of the offensive line and deep down he always knew that he needed to be playing on the left side. When Ronnie Stanley suffered a season-ending injury in 2020, Brown Jr. got his first significant snaps there. He knew that the recently-signed contract extension for Stanley meant that he would never be more than a fill-in at left tackle in Baltimore. That’s when he knew that he had to seek out another opportunity.

“I would say for me, after Baltimore signed Ronnie (Stanley) to a long-term extension it was understood that was going to be their guy playing left tackle,” Brown Jr. explained to reporters. “Shortly after that, I met with my family and I met with my mentor and we came up with the best plan. And then we spoke to my agent and for the most part, Jammal Brown, my agents Justin Schulman and Joe Panos, you know they took care of everything. They got me here.”

The Ravens knew how important it was that Brown Jr. honor his father’s wishes, and it was why they were so amicable in finding a trade partner. They watched his father’s career and they watched Brown Jr. grow up before their eyes. They knew that this was about more than finances or worth— it was about fulfilling a promise that was made many years ago.

“Growing up as a child when I committed to play this game, my dad didn’t let me play,” Brown Jr. said. “I literally had to call him crying as a 12-year-old kid, you know begging him to let me play football. Something that he made me promise him is that I was going to be a left tackle, and I was going to be in this league for 10-plus years and be a Hall of Famer. Something he always expressed to me and my siblings was, ‘Be better than us.’ And to have the opportunity to live out my dream, to have the opportunity to play left tackle for this league, to play it for this organization is so special to me. It has nothing to do with finances, it’s the opportunity to live out my dream— live out my father’s dream for me.”

One part of that promise is already fulfilled, Brown Jr. will be the starting left tackle in Kansas City. He’ll be protecting the blindside of the NFL’s most electric quarterback in Patrick Mahomes. But the rest of his promise, well, that’s up to him from here on out.

“Going to games, growing up, my dad would tell me, ‘Hey, watch Jonathan Ogden, don’t watch me. Watch his game, study his game,’” Brown Jr. said. “Watch Tony Boselli, watch his game, watch Anthony Munoz, watch all of these guys. Watch Trent Williams, you know what I mean? Watch Bryant McKinnie. Don’t watch my film.’ And obviously, I did (watch his film) because it’s my father, but he would tell me to watch the left tackle and it was kind of ingrained in me at a young age.”

Brown Jr. wants to be recognized among the greatest left tackles to play the game because those are the players his father told him to mold his game after and idolize. He took that to heart, and now that his dreams have finally been realized, it’s time to get to work to ensure that he can fulfill the rest of his promise.

“I would say that it was a dream that I set, just as coaches set dreams to become head coaches or assistants to become coordinators,” Brown Jr. said. “It was a dream and goal that I set for myself. And to have an opportunity to play (left tackle) in this league is a dream come true and to have it be this franchise is just incredibly special.” 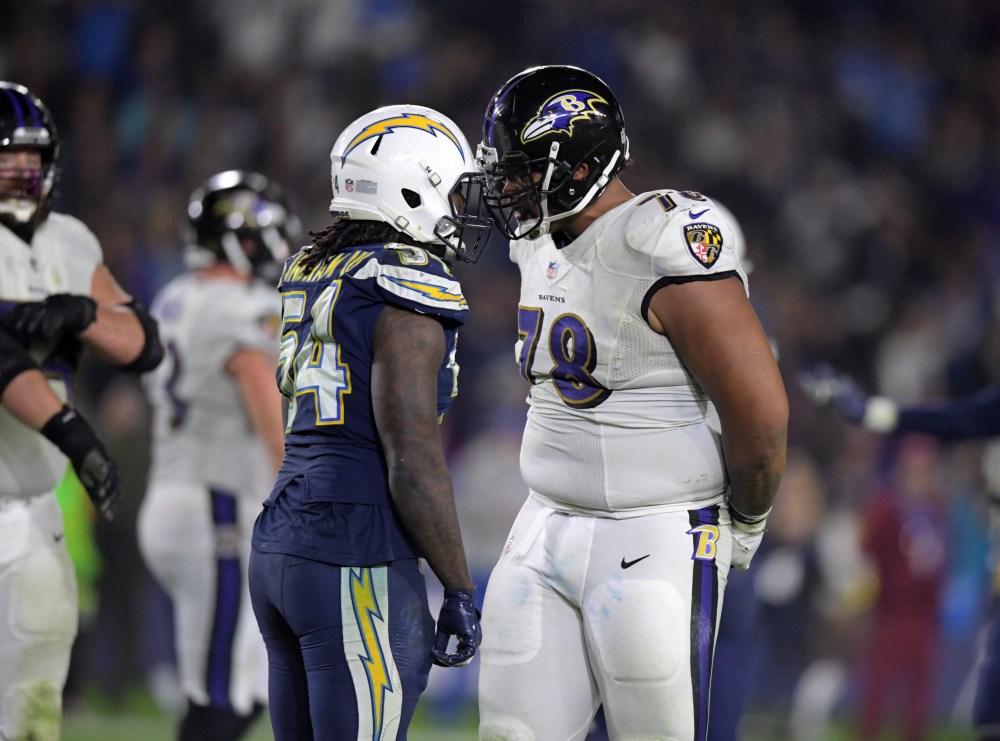