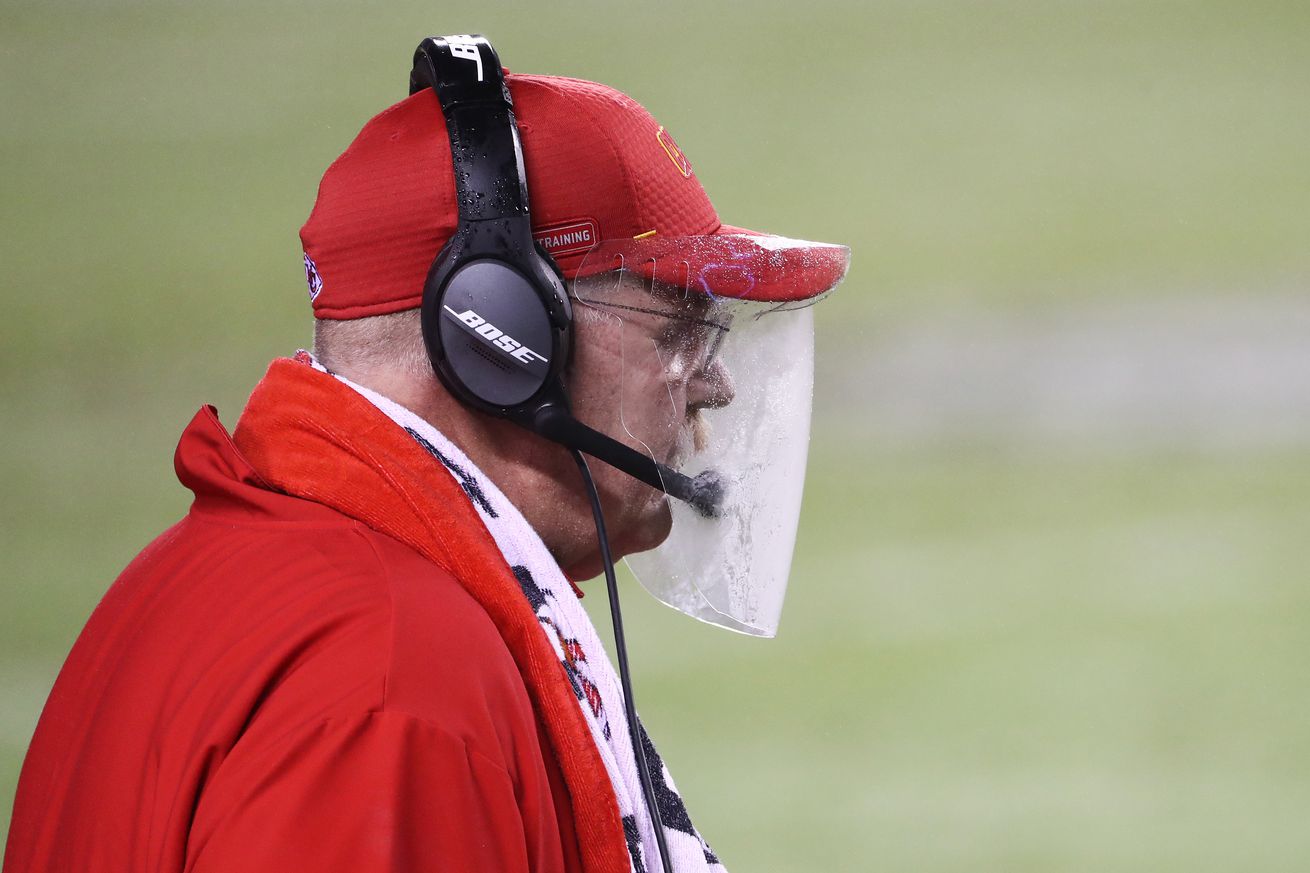 After multiple head coaches were observed on the sidelines without masks — or wearing them improperly — the league took action.

The Kansas City Chiefs opened the NFL season with a 34-20 victory over the Houston Texans — and a fashion statement from head coach Andy Reid, who sported a plastic face shield attached to the bill of his ball cap instead of a common face mask.

Reid has been spotted wearing this contraption ever since the Chiefs began their training camp, but its appearance in the nationally televised season opener drew some comment across the country — particularly when it became fogged up during the game.

“Yeah, that was brutal,” Reid said after the game. “I didn’t do very good with that thing. But it’ll be better the next time. I appreciate you asking that, though. It was a bit of a mess, but we’ll get it fixed.”

Reid was sometimes observed tipping his hat back while having conversations with players on the sidelines, but generally kept his shield in place.

But across the league, many head coaches didn’t do a very good job of remaining masked on the sideline — as they are required to do — during Week 1’s games. The Arizona Cardinals’ Kliff Kingsbury, San Francisco 49ers’ Kyle Shanahan, Tampa Bay Buccaneers’ Bruce Arians, New Orleans Saints’ Sean Payton and Las Vegas Raiders’ Jon Gruden were just some of the head coaches who were regularly observed on the sidelines without masks — or with them pushed down over their chins or necks. This resulted in a memo from NFL executive vice president of football operations Troy Vincent that was sent to all 32 teams on Monday.

“We must remain vigilant and disciplined in following the processes and protocols put in place by not only the league, union and clubs, but also by state and local governments,” said the memo, per NFL.com. “The NFL-NFLPA Game Day Protocol, which reflects the advice of infectious disease experts, club medical staffs and local and state governmental regulations requires all individuals with bench area access (including coaches and members of the club medical staff) to wear face coverings at all times.”

The memo made a point of saying that masks must not only be worn, but worn correctly.

“The face covering must be worn as designed so that it securely fits across the wearers nose and mouth to prevent the transmission of the virus.”

And Vincent also warned of penalties for infractions.

“Failure to adhere to this requirement will result in accountability measures being imposed against offending individuals and/or clubs.”

It would be pretty easy to dismiss this is a public relations measure from the league; it isn’t a good look for head coaches to fail to adhere to these standards in empty stadiums — or in facilities where fans are required to wear them. But it’s also a question of the example the coaches are setting for their players, who are constantly being reminded that they must maintain discipline off the field to keep the league’s infection rate low enough for the season to continue.