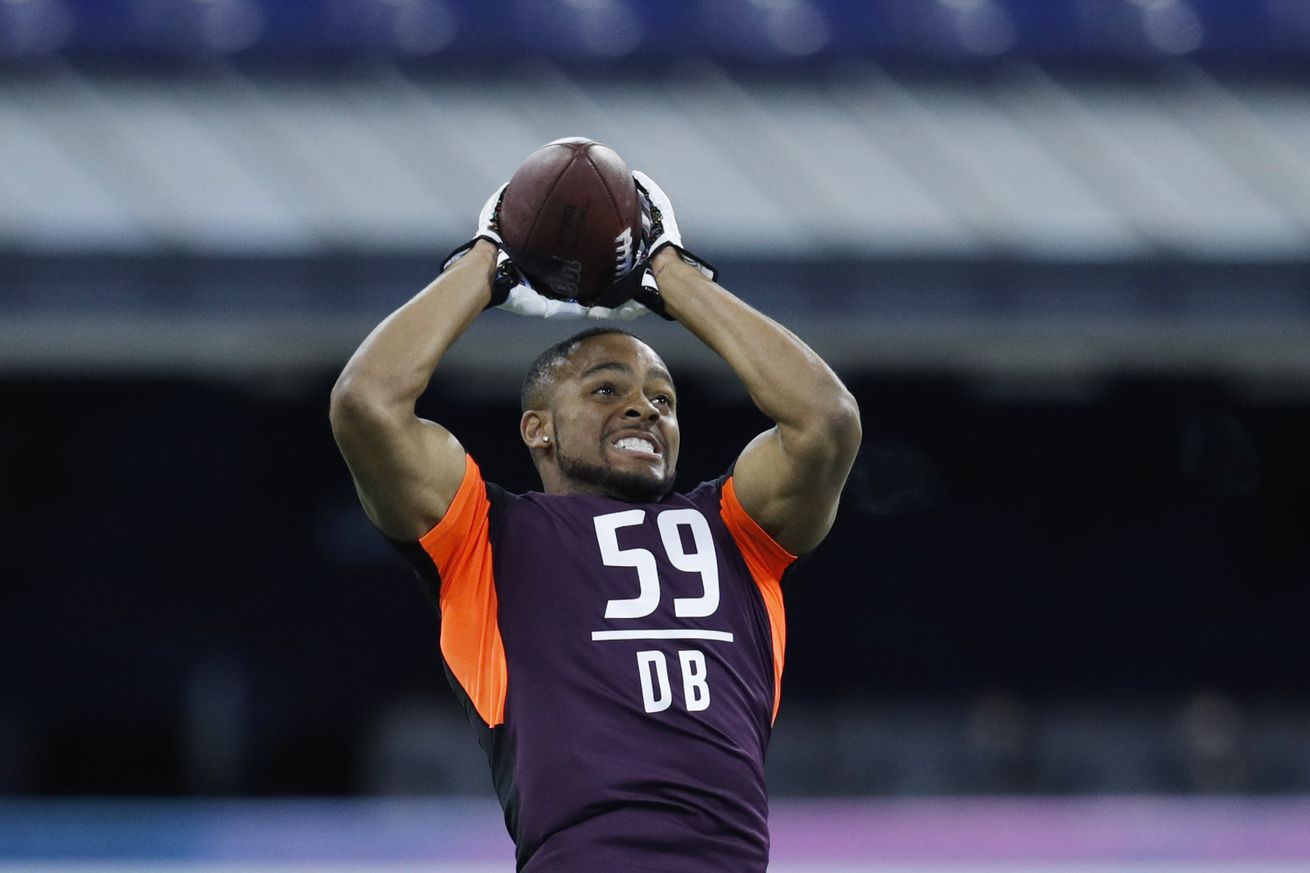 Previewing the defensive back seven in this week’s NFL Combine

The NFL Scouting Combine is well on its way.

Up to now, we’ve previewed the offensive skill players and the offensive and defensive linemen who are competing at the Combine. Today, we’ll conclude with the linebackers and defensive backs. As we have done before, for each position we’ll look at the top prospect, highlight a player who needs to have a big performance and then examine another who would be a good fit for the Kansas City Chiefs.

For the top performer, I’m unsurprisingly torn between two players who also happen to be elite athletes. Simmons weighed in at 238 lbs. Reports coming from Indianapolis say that Queen could break 4.4 in the 40-yard dash. Both guys should excel in the testing — and Queen will likely look incredible in his on-field drills.

Baun is going to turn heads. At the Senior Bowl, we saw his fluidity in coverage, but there still seems to be some debate about what position he should play at the next level. I expect Baun to not only to post a high-quality athletic profile, but in the field drills, showcase some of the better fluidity and control among the off-ball linebackers.

As he is now flying under the radar, Dye really needs to shock people, proving he belongs in the conversation with the other elite athletes. With a lanky frame much like a wide receiver, he’s going to win in coverage and in space — but there have been some questions about whether he is great athlete or just a good one. He should run well enough, but his change-of-direction drills will be the ones to watch.

Working back from a torn bicep in Oct. but is picking up steam heading into the combine.

As Craig Stout outlined this week, before he came to the Chiefs, defensive coordinator Steve Spagnuolo tended to prefer a specific physical type at linebacker. While that may or not be changing after his year off in 2018, it’s important to note that all of his linebackers have to be able to play interior run gaps. That often requires size and some level of strength. A player like Strnad — coming in at 238 lbs. — fits that mold. He is also an excellent athlete with natural coverage skills. But after tearing his bicep earlier this year, his biggest hurdle will be the medical checks.

Looking for a Combine sleeper? Good bet for fastest DL is @KU_Football Azur Kamara (@kingAzur_). Checkout the chase speed (from right edge) on this play from @seniorbowl. Good lesson for kids, explosive plays are good opportunity to show off your speed. #TheDraftStartsInMOBILE pic.twitter.com/izDy2gbN96

Since it’s almost an entirely different position, I wanted to add a potential SAM linebacker fit like Kamara. While he has some experience as an off-ball linebacker, most of it is as an edge rusher. He has fantastic speed for the position. Checking in at 6-foot-3 and 245 pounds — and with arms over 35 inches — he is a prototypical SAM or 3-4 outside linebacker.

His parents are Olympic level track athletes, so Igbinoghene he was following in their footsteps in Auburn’s track and field program before moving to football. He started as a wide receiver but transitioned to cornerback in 2018. After only two years, he began attracting attention for his raw athleticism — and how quickly he was improving. His athletic testing should blow the roof off, but how he performs in positional drills will be very important.

Guidry is a smaller defensive back who played outside cornerback, slot corner and safety at Utah. To make up for his size, it will be important for him to demonstrate top-flight athleticism. He’s incredibly fast. He could turn in one of the fastest 40-yard dash times for any position.

Many see Henderson as one of the upper-tier cornerbacks. He is perceived as cover corner with elite athleticism. He does look silky smooth and is rarely outmatched athletically, but he is very much a finesse player. He’s one of the few players at the Combine for whom just a respectable bench press may be important — as will his interviews. His testing needs to come across as high-tier to compensate for his lack of physicality on the field.

OSU’s other, other CB – Damon Arnette – flies under the radar for being an older prospect that doesn’t possess the same top flight athleticism his teammates might.

Even w/o elite speed or fluidity, Arnette comes downhill with authority and knows how to play the SL beautifully. pic.twitter.com/21Bu4asqCo

Arnette’s draft stock is all over the place. Much that stems from some rumored maturity issues — and rubbing interviewers the wrong way. The Combine is his chance to clear all of that up, forcing teams to focus on his on-field performance. Arnette is a bigger, physical corner who would fit perfectly into Kansas City’s defensive scheme. People close to the Ohio State program have told me he is going to test very well. Given the size and physicality, that would be incredible for his draft stock.

I don’t think it’s any longer a secret that the 6-foot-1, 217-pound small school safety is about to blow up the Combine. After getting plenty of hype leading up to the Senior Bowl, Dugger may have surpassed the expectations of even his biggest fans. Now he is on the fast track to be a top-50 pick. With his size, if he can follow up his Senior Bowl performance with elite testing, he could be among the top safeties in the class.

Dugger may have received more hype at the Senior Bowl, but because he was asked to do a lot more in coverage, I’m not sure Chinn wasn’t equally impressive. Another big player at 6-foot-3 and 219 pounds, Chinn played some at outside corner and some at safety. On film, he looks like a super athlete at his competition level. If that carries over to the testing, he is going to draw more attention.

While top-flight athleticism may not be the crux of his game, with good testing, Stone has a chance to drive himself into the second tier of safeties. As long as he meets the NFL requirements from an athletic perspective, his football IQ, physicality and flashes of ball skills are intriguing.

This is a 2-fer for CLEM S K’Von Wallace. He reads the route to make an INT vs CHAR, then takes it to the house. Next play, he’s reading the run and attacking, not stopping until the RB is down. #SnapScout pic.twitter.com/OhtH1I9soJ

Although Isaiah Simmons (or even A.J. Terrell) got all the attention on Clemson’s defense, Wallace was a pivotal player. Whether aligning deep on early downs or kicking down into the slot — where he was one college football’s best performers — he was just rock solid. I don’t think he’ll test at an elite level, but on the field, his change-of-direction ability should be on display.