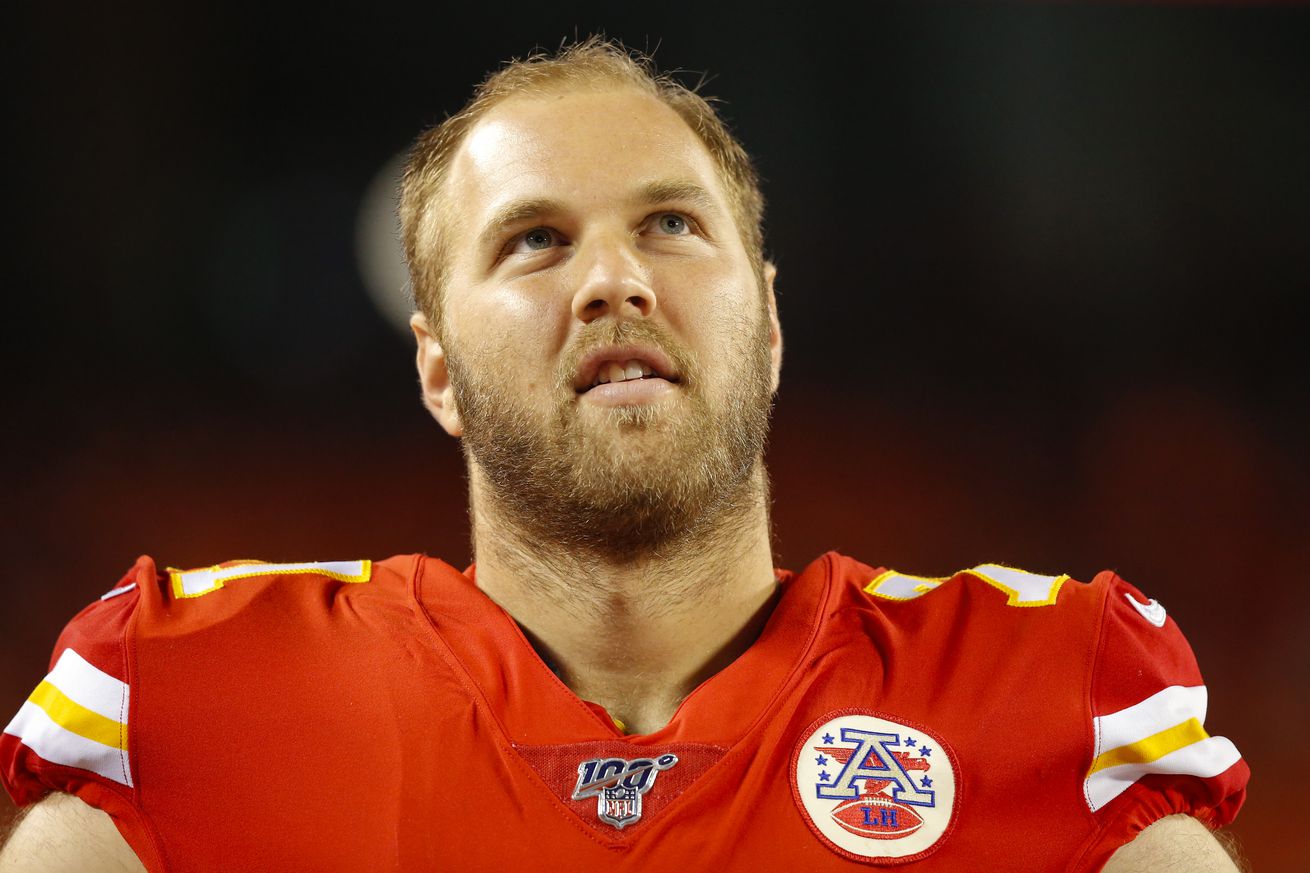 In a recent podcast appearance, the Chiefs right tackle recalled a Super Bowl memory you might not expect.

NFL offensive linemen never get enough credit — even when they’re among the best in the league.

So for Kansas City Chiefs right tackle Mitchell Schwartz, it was a welcome accolade to be named a first-team All-Pro after the 2018 season — and having Pro Football Focus give him the highest grade among all players during 2019’s postseason was very nice, too.

“At this point, I think I’m one of the best,” Schwartz acknowledged in a recent edition of The Ryen Russillo Podcast. “I’ve never necessarily thought I was the best — just because I’m pessimistic by nature. I’m kind of always looking to do better and hold myself to a very high standard.”

But after eight seasons in the league — four each with the Cleveland Browns and the Chiefs — Schwartz believes the bar needs to be set very high.

“It’s stressful, man,” he explained to Russillo. “Your job is literally protecting the MVP of the league last year. Every play, my job is to protect Patrick Mahomes.

“You have such a higher level of responsibility than pretty much any position. I mean, if a receiver drops a pass, he’ll get the next one. A defensive back gives up a play or misses a tackle, he’ll get the next one. [But] if I don’t block Von Miller and he destroys Pat, there’s no ‘Oh, I’ll get you next time. Oh my God, hope you’re OK, hope everything’s all right.’

“It’s a way-higher level of stress — and I think that’s something [offensive linemen] kind of bond together over. It makes us kind of dependable and reliable in a way that not everyone is — or has to be.”

Even after winning a Super Bowl with the Chiefs, Schwartz fondly remembers his time in Cleveland, where he had just that kind of bond.

“I loved Cleveland,” he recalled. “I had an incredible offensive line room. Joe Thomas, Alex Mack and John Greco — three guys who were in my wedding, so some of my best friends in life — so we had fun pretty much every day. The losing sucked; it grates on you over time. But every day, I was excited to go to the facility, because it was just so much fun hanging out with those guys.”

But even so, when the Chiefs came calling, he was ready to move on to a winning environment.

“My brother had played there for a year — in Coach Reid’s first year in Kansas City — so I knew he loved Coach, he loved [offensive line] Coach Heck, he loved living in the city. It just kind of fell into place.”

And with the Chiefs, Schwartz found a place he could continue to excel — and contend for championships, too. Since his arrival in 2016, he’s started every game — and the Chiefs collected four consecutive AFC West championships before winning Super Bowl LIV in February.

But Schwartz said that what happened after the game was unusual on multiple levels.

“The weird thing about the Super Bowl is that we didn’t really get together as a team in the locker room after the game — because there’s so much going on,” he explained. “First you do all the stuff on stage — and then there’s 400 media people who somehow get access to the field and you get pulled in all these different directions and you’re doing interviews after.

“From there, you go to the media tent — the tents set up for 10 or 12 guys — so people are being pulled in every single direction. There’s no singular point where it’s like, ‘The whole team’s going to get back to the locker room at X time’ and we’re going to see each other and all be together.”

So for Schwartz, the game’s most significant memory is from an unexpected time and place.

“My biggest memory is being on the bus after the game, going back to the hotel — players, coaches all singing together and happy. Usually, we’re pretty respectful and keep it quiet — but not on that bus,” he chuckled.

But in any season, the high of a Super Bowl victory only lasts so long. Then it’s time to get back to work. In 2020, the offseason has obviously presented special challenges.

“It’s been a little bit weird during this OTA period to not be in the facility — to not have to drive in and go to meetings, have the practice,” said Schwartz. “But as an older guy, I’m kind of digging it; I’m able to stay at home.”

He said he had to get some home gym equipment in order to do the physical part of his offseason conditioning, but otherwise feels that the virtual part of the offseason has worked out well — except for the coaches’ sense of comic timing.

“The virtual meetings, honestly, are kind of cool. It’s not too bad. We’re covering all the the same stuff we normally would. It’s just that you don’t normally get to see people every day. It’s a little bit weird because when coaches are talking, they can’t see us. So they throw out one-liners and jokes and they’re not able to see our reactions. They kind of just have to assume that all of their jokes landed.

“I know the NFLPA and the NFL are still talking about that ramp-up period and needing to make sure that things are happening safely,” he added. “You worry about Achilles stuff and change-of-direction. But I think for the most part, it seems like guys have found a place to work out — whether it’s what they’re used to or running stairs. I tried to do step-ups on the stairs outside, [but] it was such a weird angle, I nixed that right away.”

But later, when talking about Houston Texans defensive end J.J. Watt’s quick return from the pectoral muscle injury he suffered in Week 8 of the 2019 season, Schwartz made it clear that just thinking you’re ready doesn’t necessarily make it so.

“There’s just no substitute for NFL football,” he declared. “That’s something that you realize in training camp. I mean, you think you come into camp in great shape — and two days later, you feel absolutely awful. You’re like, ‘Man, I just did all this stuff. Why do I feel this way?’ It’s just that football shape is different.”

Just the same, past performance would suggest that even under these unusual circumstances, if there’s any way for the Chiefs right tackle to be ready… he will be.