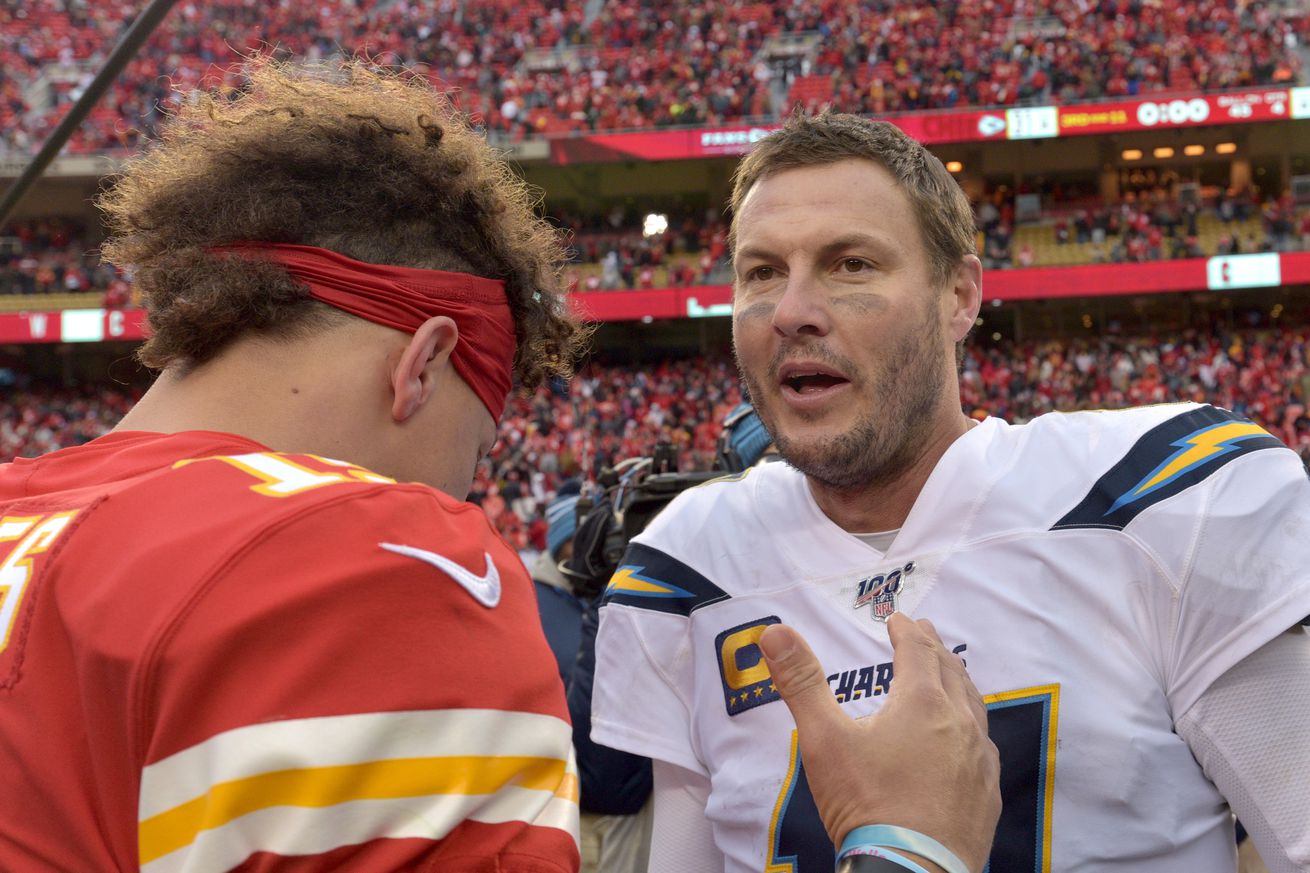 Rivers finishes with a 14-15 record against the Chiefs as a member of the Chargers.

The Los Angeles Chargers confirmed what we all knew was coming on Monday — that 16-year quarterback and 14-year starter Philip Rivers would enter free agency.

“In anything you do, it’s the people you do it with that make it special. There are so many relationships and memories with coaches, support staff and teammates that will last forever, and for that I am so thankful.”

“After stepping back a bit from last season, we reconnected with Philip and his representatives to look at how 2019 played out, assess our future goals, evaluate the current state of the roster and see if there was a path forward that made sense for both parties,” said Chargers general manager Tom Telesco in a statement released by the team. “As we talked through various scenarios, it became apparent that it would be best for Philip and the Chargers to turn the page on what has truly been a remarkable run.

”We agreed that making this decision well before free agency would allow everyone to put themselves in the best position for success in 2020.”

Rivers also commented in the statement.

“I am very grateful to the Spanos family and the Chargers organization for the last 16 years,” said Rivers. “In anything you do, it’s the people you do it with that make it special. There are so many relationships and memories with coaches, support staff and teammates that will last forever, and for that I am so thankful.

”I never took for granted the opportunity to lead this team out on to the field for 235 games. We had a lot of great moments, beginning in San Diego and then finishing in LA. I wish my teammates and coaches nothing but the best moving forward.

”I’m not sure what the future holds, but my family and I look forward to seeing what God has planned for us next.

News broke back on January 19 that Rivers moved his entire family from San Diego to Florida, likely indicating that he knew his time with the Chargers was over.

Rivers finishes his Chargers career against the Chiefs with a less-than-.500 record of 14-15, going 630 of 1,011 for 7,504 yards, 41 touchdowns and 39 interceptions. Rivers had an 82.4 passer rating against the Chiefs as a member of LA. Chiefs fans will fondly remember his 2011 fumble at Arrowhead Stadium that led to the Chiefs winning 23-20 and his “worst day ever” moment.

Rivers’ final game against the Chiefs was a 31-21 loss at Arrowhead Stadium, after which he told reporters that he believed Kansas City had a legitimate chance to win the Super Bowl.

“Heck yeah — they do,” he said. “They’re one of 12 teams in it, so that’s how I see it. There has been a five seed [that won], a six seed [that won] and they’re going to be a two seed. So yes — I think they have a chance. I think anytime you have the speed they have on offense, you have a chance — [and] the way their defense communicates and comes together.”

Of course, Rivers was right. Back on February 6, BetOnline.ag sent over some odds on Rivers’ next team — and the top five most likely are the Tampa Bay Buccaneers (2/1), Indianapolis Colts (3/1), Carolina Panthers (4/1), Las Vegas Raiders (4/1) and Miami Dolphins (11/2).

So even though the 38-year-old Rivers may not be wearing a Chargers jersey ever again, the Chiefs have probably not seen the last of him, especially if he ends up in Las Vegas.