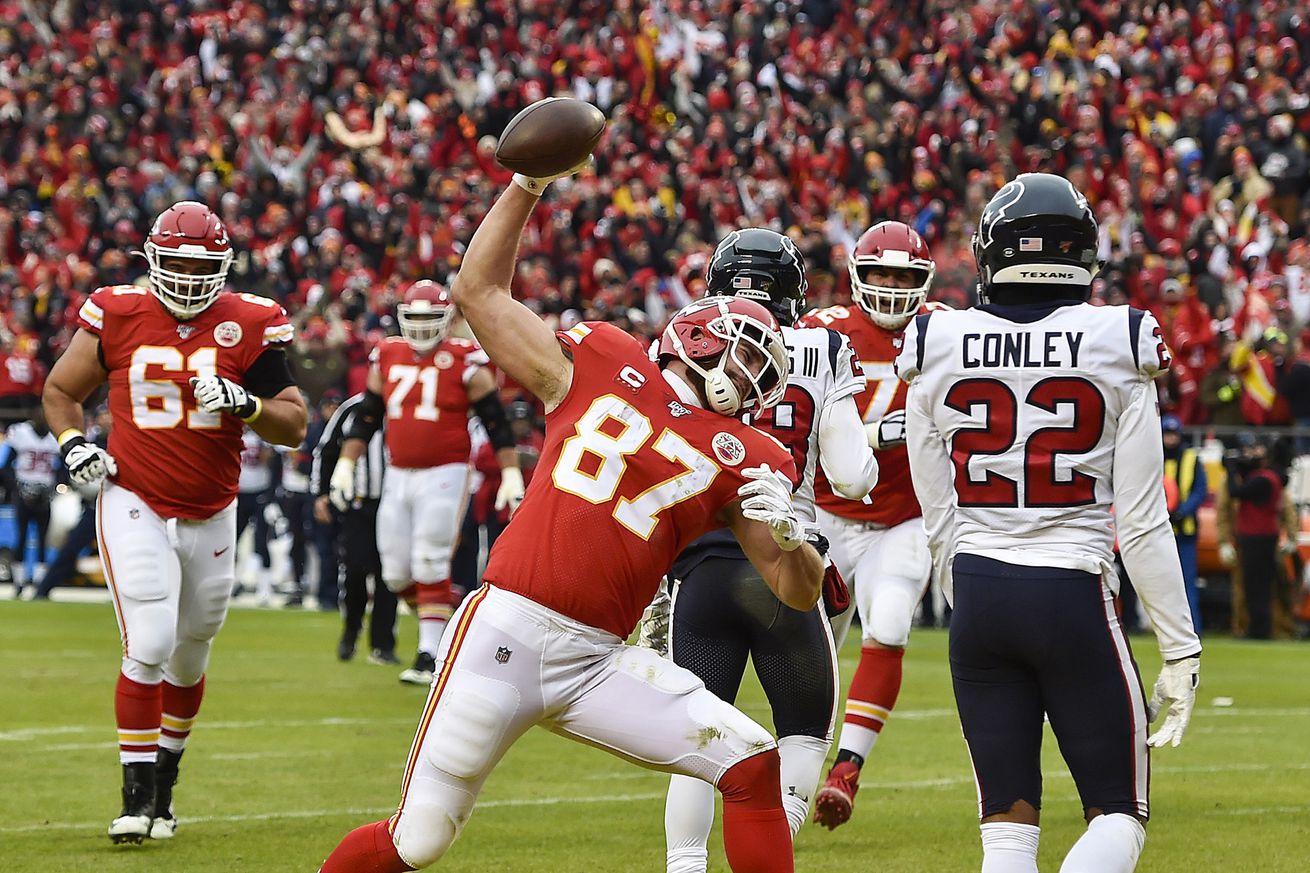 In case you were not aware (via my tweets or the Arrowhead Pride Laboratory), the Kansas City Chiefs are currently on a 51-7 run against the Houston Texans.

In the 2019 divisional round — en route to their first Super Bowl in 50 years — the Chiefs turned a 24-point deficit into a comeback and then a blowout. For the final three quarters of Bill O’Brien and his team’s season, Patrick Mahomes and the Chiefs treated a playoff team in a playoff game like an SEC team playing Indiana State.

The story of the world champions would not have happened if it weren’t for a rare performance from a rare player. Travis Kelce played the best quarter and game of his life to spark a Chiefs comeback blowout. After mental errors (including a drop from Kelce) in the first quarter, Kansas City went from 24 points down to four up in less than a quarter — and Kelce was involved from the start.

The Chiefs’ Comeback Blowout of the Texans was sparked by a big kick return by Mecole Hardman and a quick, two play drive:
– Nifty V7 by Kelce against Justin Reid in man coverage
– Kelce’s excellent rub to spring Damien Williams and exceptional ball placement by Mahomes pic.twitter.com/HjqedLPrDF

The Texans tried to match up safety Justin Reid against Kelce early in the game — but that didn’t go well for them. Early in the game, Kelce proved to be a difficult player for the Texans to line up across. He is one of the rarest players in the league — a big-bodied tight end with the hip fluidity of a top-shelf wide receiver. It’s not like Houston was the only team that ran into this problem — it’s that it wanted to play man coverage. Kelce ate it up, starting with an excellent V7 (corner route with a hard stem to the middle of the field) against Reid to get the Chiefs offense into the red zone.

The stop-and-start change of direction at the top of the route was too much for Reid to handle. The next play, Kelce helped spring running back Damien Williams open with a well-executed rub route against more man coverage. He was critical in creating the traffic that kept linebacker Jacob Martin from running with Williams on the shoot route out of the backfield.

Reid — a safety — wasn’t working out well for the Texans, so they put rookie Lonnie Johnson on Kelce with the hopes of containing him with a 6-foot-2 cornerback. Johnson has rare length and size for the position, so the Texans likely figured he could give Kelce problems. He didn’t.

Justin Reid couldn’t handle Kelce, so the Texans tried to match him up with rookie cornerback Lonnie Johnson. It did not go well for Houston, as Johnson committed pass interference twice in the second quarter of the Comeback Blowout. pic.twitter.com/O5nUcpUFqd

On the second play, the Chiefs were running a Y-Pump (out and up double move by Kelce) and again, Johnson was beat. His only hope was to get grabby at the break — forcing yet another pass interference en route to one of three scores that Kelce would have in the quarter (more on that later). Kelce didn’t let Johnson off easy.

Travis Kelce trolling Lonnie Johnson after a pass interference call in the Chiefs’ Comeback Blowout of the Texans in the divisional round last year. #51to7run pic.twitter.com/tQJCXrTrDc

It didn’t matter who the Texans lined up over Kelce — they got beat.

It didn’t matter who the Texans lined up over Travis Kelce: Justin Reid, Lonnie Johnson or Vernon Hargreaves (here) – they had no answer for him in the best quarter of football of his life. pic.twitter.com/5jSewnxnHW

Houston put a smaller defensive back — Vernon Hargreaves III — on Kelce and actually doubled him with Johnson. Kelce gave a sneaky push at the top of his route on his way across the field and Johnson was late to double him — leading to yet another big play en route to a route.

(Quick sidebar: this was one of the cleanest, textbook throws from Mahomes all season — beautiful step up and clean release in rhythm)

As if Kelce wasn’t impacting the game enough with all these plays made, he also scored three touchdowns with high levels of difficulty — some on third down.

The Chiefs erased a 24 point deficit in one quarter on the back of three Travis Kelce touchdowns.

Quarterback and tight end were operating on a different level than the other twenty players on the field. The creativity and trust to get these three plays into the endzone is rare. pic.twitter.com/JoTOD7X5h7

Kelce was key in getting the team down the field for these plays — but he also finished the drives on the final three series of the half — including the go-ahead score. The connection between Mahomes and Kelce is rare — but on full display in these plays. None of them were clean, but both players were on the same page.

Kelce showed great body control and focus on all of these plays; Mahomes displayed great ball placement, patience and trust in the best tight end in football. A couple of these plays were on third-and-goal situations — the Chiefs needed them to complete the comeback. The result was a four-point lead at the half after trailing by 24.

Kelce kept beating Texans up and down in the field in the second half — extending scoring drives with big catches of 20-plus yards and continuing to show the connection the quarterback and tight end have in Kansas City.

The second half of the Chiefs’ Combeback Blowout of the Texans was much more of the same – Kelce being unguardable.

– Outstanding wrap of Justin Reid
– Rocker step at the top of the route creates separation on drag pic.twitter.com/SRSsRkkbyw

On the first play, Kelce wrapped around Reid — out break and then a sharp break back inside. It’s possible the wrap was actually improvised, but it was perfectly executed by both.

The NFL’s Mic’d Up segment for this game seemed to indicate that the design didn’t call for the wrap, but both players adjusted on the fly. The play worked, and the Chiefs would score on that possession. The next play shown is yet another example of how rare of a talent Kelce is for his position. He has the most fluid hips of any tight end in the NFL. You cannot find many men with receiver skill sets in a body his size.

The Texans tried to man-up Kelce with a variety of body types and skill sets and none of them were able to contain him. They’re going to run into the same problems this year if they intend on playing man coverage against the Chiefs’ vaunted offense. As big of a problem as Kelce was for the Texans, I could see them playing more zone on Thursday.

If not — the likes of Reid, Johnson or anyone they line up across him could be in for yet another long night.