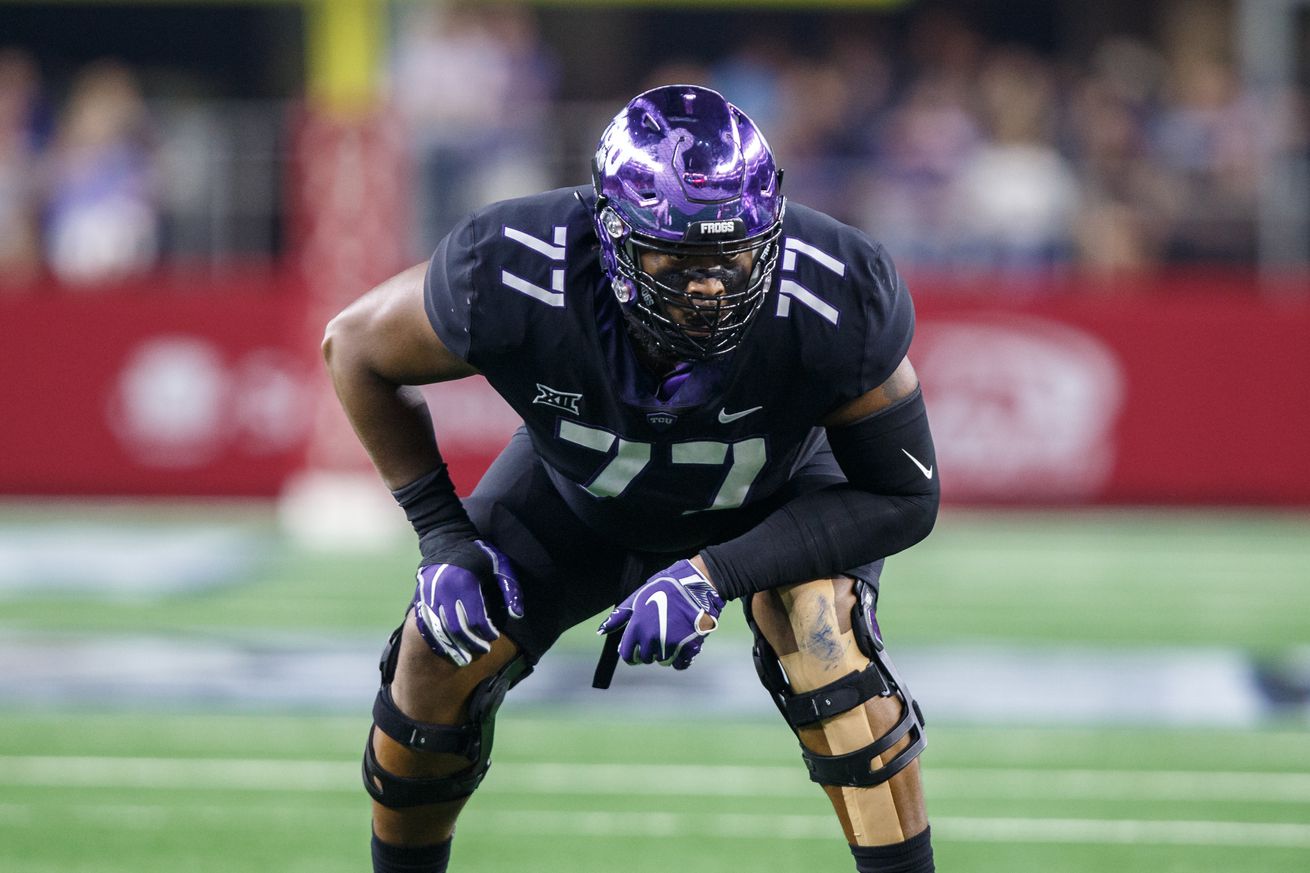 The former TCU offensive tackle isn’t shying away from the chance to contribute immediately.

There are two basic philosophies that NFL teams tend to follow when going through the annual drafting process: each selection will either make an immediate impact or be a long-term, developmental player.

The Kansas City Chiefs used their third-round, 96th overall pick to select former TCU offensive tackle Lucas Niang, and it sounds like general manager Brett Veach fit his third pick of the draft into both categories.

“He’s a guy that can play some guard too,” Veach pointed out during his Friday night press conference. “We think he can come in right away. The kid is smart and talented at guard and can potentially work and develop at both right and left tackle.”

The 6-foot-7, 328-pound prospect was TCU’s starting right tackle for the past two seasons. His performance protecting the edge in pass protection was impressive to watch — and the numbers backed up his film.

This should be proof that he needs to be thought of as a long-term starter at one of the offensive tackle positions — but the Chiefs want to win a Super Bowl in 2020. Niang recognized the situation and embraced it.

“They asked me how I would feel if I got moved to guard,” Niang revealed in his media availability. “I’ll do whatever they need me to do. You can only have a certain amount of offensive linemen, so I need to be versatile and I understand that. I’m willing to go anywhere and do whatever I got to do to help win.”

He’ll be the fifth in a group of guys competing for either guard spot. Offensive linemen Laurent Duvernay-Tardif, Andrew Wylie, Martinas Rankin, and Mike Remmers all have experience on their side — although none of them were originally drafted any round higher than Niang. He believes his skills certainly fit what the Chiefs need from the offensive guard position.

“I’m a good puller. I have a good base on me, good feet,” Niang stated. “I do well in space. I can find a target and hit a target and stay on balance. So, I think this is kind of the perfect system for me. I have a lot of practice at it as well.”

The heightened competition should give fans confidence that whoever wins the job will be a good starter. Veach seems to have a well-thought out plan for Niang going into the offseason program and training camp.

“(Offensive Line) Coach (Andy) Heck does a great job of letting the guys work in at guard with the ones and twos and tackles, a little bit with the threes,” Veach explained when asked about his projection of Niang.” I think that’s kind of what you’d see, you’d see him with the earlier groups at guard and then as the younger guy taking more reps with the second or third team as tackle just have him bounce in and out.”

The towering lineman does noticeably well at getting his hands on a defender and taking them where he wants to. He pointed out a running scheme that he will see plenty of in an offense led by head coach Andy Reid.

“My favorite run block is outside zone,” Niang answered when asked about his preferred run play.” I just love the feeling of taking that quick, first step and then taking somebody as far as you can where you want to take them, getting a lot of displacement.”

One reason that Niang may have slipped down the draft board was his medical history. After seven games played in 2019, Niang had no choice but to shut down for the season and get surgery on a torn hip labrum that had been hampering him awhile.

“I did it my junior season, so I was prepared for it,” Niang announced. “I knew the surgery was going to be a big deal. I just tried to tough it out, play as long as I could and I got it when I had to get it.”

His late-October surgery originally required a three to four-month window of recovery. Well past that now, he didn’t hesitate to let the media know about his immediate availability.

“Yes sir. As soon as I can get on the field with a team, I will be 100% ready to go,” Niang assured when asked multiple times about his injuries. “I haven’t rehabbed in about a month. I’m just doing strengthening and endurance stuff now. Trying to get back to old strength. As soon as we put on the pads I’m going to be out there going.”

“That’s always been my mentality and the way my parents raised me,” Niang began when asked about his Youtube video about burning his Pop Warner second place trophy. “It was to be the best you can be every day. It doesn’t matter what people are doing around you. You’re not trying to be them, I’m trying to be the best version of me. So, I had that approach and I was never okay with second place.”

It sounds like Niang will be a great fit in Kansas City, considering the Chiefs have proven they’re not okay with second place either.