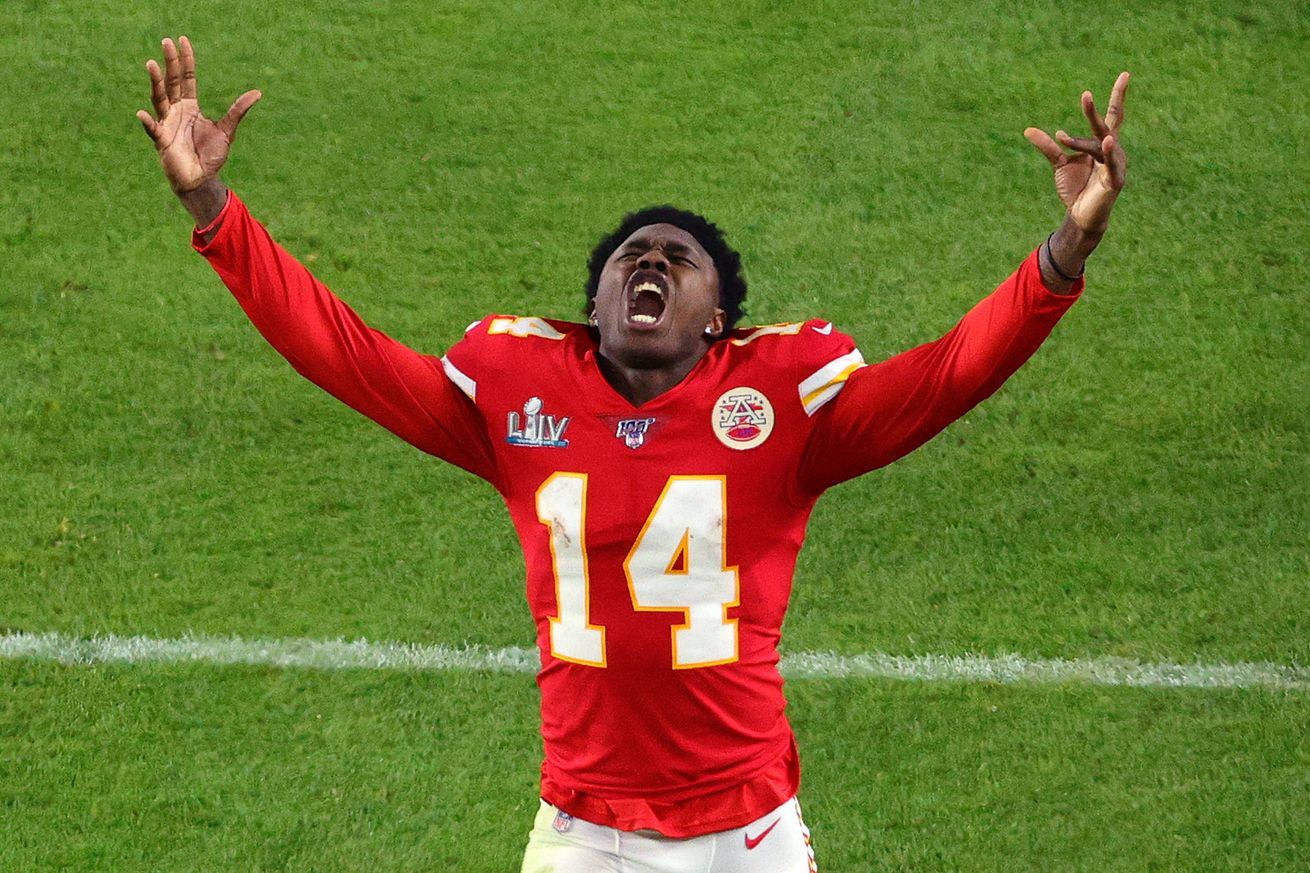 Here is what we know right now.

The future of Sammy Watkins as a Kansas City Chiefs wide receiver in 2020 is a bit of a mystery as of this writing on Friday, February 7, still days after the Chiefs won Super Bowl LIV.

To figure out what may happen with Watkins, 26, one must start at the salary he is due to make in 2020. According to Spotrac, that is $14 million. Watkins signed a $21 million signing bonus back in 2018, $7 million of which will be devoted to this year’s cap. If the Chiefs choose to cut Watkins outright, they will save $14 million against the cap. Watkins’ $21 million cap hit for 2020 would be second only to defensive end Frank Clark ($22.7 million). With new contracts due for Patrick Mahomes and potentially Chris Jones, there is one thing we know for sure — Watkins will not be returning to Kansas City at that price.

But here is the tricky part — in an era in Kansas City in which Super Bowl wins define successful seasons, Watkins’ best numbers have come in the playoffs. Watkins led the Chiefs in the 2018 playoffs with 10 receptions for 176 yards, and he followed that up with a team-leading 288 yards on 14 catches and a touchdown in the 2019 playoffs.

This is an absolutely filthy route by Sammy Watkins on Richard Sherman in press coverage pic.twitter.com/Js9NH2XoRc

Watkins’ 38-yard catch late in the fourth quarter is one of the major reasons the Chiefs were able to come back and beat the San Francisco 49ers in the Super Bowl. Watkins registered five catches for 98 yards in the championship win, second only to Tyreek Hill, who had 105 yards.

What the Chiefs are saying

”We’ve just got a lot of weapons and when you are aggressive in the offseason and you make moves, you don’t make moves to make the playoffs,” said Veach. “We’ve been a playoff team for years. Since we’ve got here, we’ve been in the playoffs every year. You make moves like that to put you over the top. Certainly without Sammy’s performance today who knows how this game would have turned out? Sammy was big… He is around a lot of talent so sometimes he can’t show exactly what he can do but he is a super talented player and he’s a big factor in why we won tonight.”

On Tuesday, NFL Network’s Tom Pelissero explained that the Chiefs would like to have Watkins back:

From @NFLTotalAccess: What do the #Chiefs do with Super Bowl hero Sammy Watkins and his $14 million salary for 2020? It may not be easy, but they’d like to find a way to bring him back. @nflnetwork pic.twitter.com/50ZpzmAZru

“The issue here is really the money,” reported Pelissero. “Watkins is due 14 million dollars in the final year of his contract — a cap number of $21 million. It may be difficult, especially because Watkins knows if he were to become available, there would be a big market out there for him, but expect the Chiefs to try to figure out a solution to keep Watkins around.”

What Watkins is saying

Watkins has said a lot of different things — first, it sounded as though he would be willing to take a pay cut to stay with the Chiefs, and then he told media members he may even sit out a year.

After the Chiefs won the Super Bowl, Watkins backtracked on the idea of sitting out but he did say that he needs “downtime,” according to SiriusXM NFL Radio.

“At the end of the day, the Kansas City Chiefs are in control as far as contract talk,” said Watkins. “As you know, a guy of my stature — i’m still young, I still think I have a lot of good football in me. But as you know, it takes a toll on the body, the mental, the physical and I’m gonna really weigh my options out and see if I need to sit out the whole OTAs or something like that, just to get my mental back and be with my kids and family,” Watkins said. “It’s been a long season for the last two years. We’ve been in the playoffs, going all the way to the third round last year, then won the Super Bowl. So I honestly think mentally, physically, soulfully, spiritually, I need some downtime. So I will talk to coach Reid about it. I don’t control the contract, a trade or if they’re going to give me a bigger contract. That’s not my worry. I’m not really focused on the money aspect of it. I’m really focused on my health, mental health and really checking in on and making sure I’m OK with my life, my family, my wife, my kids. Once I figure that out, I think I’ll be fine.”

Watkins added that he is “too young to retire” and has goals of winning another championship, accumulating 1,000 yards in a season and becoming a Pro Bowler or All-Pro.

It is impossible to truly know what Watkins’ future holds right now.

We know he enjoys playing in Kansas City and for the Chiefs but does seem open to move on and play for another team. It sounds like no matter which team Watkins ends up with — be it the Chiefs or another organization — he wants to take offseason activities off. I’d expect the Chiefs to be OK with that to keep their championship core intact, but they cannot bring Watkins back for his current cap hit.

When Watkins says something like the “Chiefs are in control as far as contract talk,” that makes me think that Watkins will indeed be playing for someone else next season.