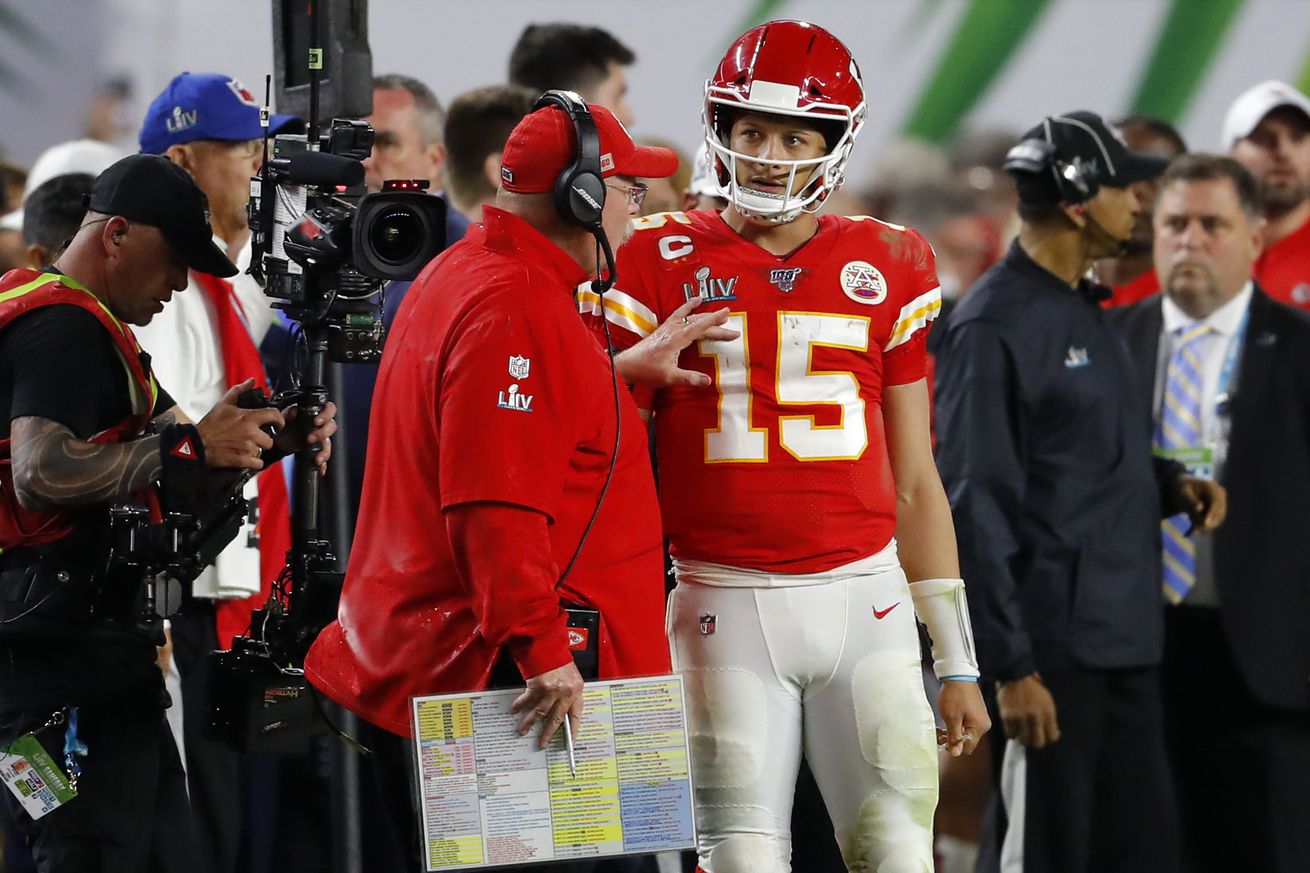 The Super Bowl came down to key conversions in short-yard scenarios. Reid pulled out the stuff he’s been saving all season for the most important moments.

Kansas City Chiefs head coach Andy Reid has received his fair share of criticism in his 21-year head coaching career. The obvious narrative is his time management at the end of halves, but there are other fundamental gripes with his style. The one characteristic of coach Reid’s that can’t be questioned is his ability to design offensive plays and produce based on scheme.

His first seasons in Kansas City had teams that didn’t possess much offensive talent, which forced him to rely heavily on scheme-driven plays like screen passes or misdirection runs out of creative formations. With good defense, it worked against inferior opponents — but better foes took advantage of their lack of talent when it mattered most.

Fast forward to 2020, where Super Bowl champion coach Andy Reid and his Chiefs have one of the most talented group of offensive skill-position players in NFL history. This improvement in personnel has allowed him to save his creative plays for the most significant moments and innovate further because of the incredible speed and athleticism at his disposal. It was on full display in Super Bowl LIV. His situational play calling — specifically in short-yardage — was very successful and important.

When you remove the final drive of the championship game, the Chiefs finished with six converted third-downs out of 13 attempts. That 46.2% is right on par with their regular-season percentage of 47.6%, which led the NFL. The more important statistic may be their two successful fourth-down attempts out of two meaningful tries. They were fifth in the league with six conversions out of 10 fourth-down attempts in the regular season.

To break that down even further, the offense was successful on 8 of 11 third or fourth-down attempts with five or less yards to convert, plus any plays within five yards of the goal line. The three failures:

Some of the most crucial plays of the game are among those eight successful plays:

By now, you’ve heard the story about this play. Reid and offensive coordinator Eric Bieniemy were inspired by the 1948 Rose Bowl. The team has been practicing the special play since the summer. Finally, in the perfect situation, the Chiefs deployed it on a fourth-and-1 during the second drive of the game — and you can tell the players were excited to run it.

My favorite part is how explosive the offensive line is off the ball. Right guard Laurent Duvernay-Tardif blasts off the line and takes his man out of the play while right tackle Mitchell Schwartz gets to the second level and bulldozes the linebacker. But the best part is Reid’s subtle details within the play.

Center Austin Reiter is positioned to look like he’s snapping it towards Mahomes still, who ended lined up behind the right guard after the pre-snap shift. The snap actually does go back towards Mahomes and he does sell a fake. Williams was prepared for the position of the snap and was able to get in position to catch the snap and accelerate before the off-ball defenders recognized who received the snap.

On this second-and-goal from the 1-yard line, initial handoff action pulls the defenders from the right edge inside because it looks like an inside run. This allows tight end Blake Bell and full back Anthony Sherman to down block those players effectively and essentially give Mahomes a one-on-two fast break to the outside like in basketball. He can either dish it or get in himself — and his athleticism allows him to freeze the defender enough for his own score.

Another example of a small detail being the key to the play on this fourth-and-1 attempt on the Chiefs’ third drive of the game.

Williams’ alignment on the left side of Mahomes puts linebacker Fred Warner on the backside of the play direction — creating a natural advantage for Schwartz and his ability to seal him from making the play. They then attack defensive end and rookie of the year Nick Bosa, forcing him to pick one player or the other. Naturally, he aims to tackle the player that already has the ball. Mahomes reads this perfectly and makes an accurate pitch knowing he’s about to get smacked. Tight end Travis Kelce also has a good perimeter block to put the cherry on top of this well-thought out design.

We saw this exact formation in Week 14 against the New England Patriots — a victory that helped the Chiefs earn the two-seed and a postseason bye week. Reid understood the implications of that win, so he knew he had to call some of his special stuff. With even bigger stakes on the line in the Super Bowl, Reid went to it again and ran a different type of play.

It was a basic triple option concept that was executed to perfection by Kelce, the former high school quarterback. He meshed with Williams long enough to get the defensive end to crash down on the inside run, and then understood how much he needed to gain for the first down. He doesn’t risk pitching it and gets upfield for the conversion.

This touchdown is a play that Reid has been setting up all season.

Thread of key short-yard attempts from the #Chiefs season

In Week 5 — a game that got away from the Chiefs — Reid was faced with a critical fourth down attempt in his own territory late in the fourth quarter. The off-ball defenders hesitate because of the threat of a run to the outside — and it gives Sherman enough room to plow forward. He’s also run it in the postseason with different personnel, and it has been in his playbook for multiple seasons.

In the Super Bowl, that play could have been on the minds of the linebackers when they bit hard initially. That action — along with Kelce’s first steps looking like a blocker’s — sets up space in the back of the end zone for Mahomes to find his favorite target. Williams’ route helps open the window by drawing the flat defender outside.

The irony of Andy’s creative, effective short-yardage playcalling in the Super Bowl is how vanilla he was on the first do-or-die 4th and short of the season. Ran basic Power with a backup guard (Ryan Hunter) as the puller. Guess what? It didn’t work. pic.twitter.com/LTtEvjRCqs

It’s well known that Reid saves his most creative plays for the biggest games. This play is an example of that being true. A rough game offensively had the Chiefs losing to the Colts 16-10 late in the fourth quarter. A big play by receiver Byron Pringle on a long third down set up fourth down with one yard to go.

The play call is a basic power run with the two most important blocks needing to be made by backup linemen who are playing due to injury. Reserve guard Ryan Hunter is the lead puller on this play while left tackle Cam Erving should be sealing the backside edge. Neither executes and it results in the first loss of the season. If a similar situation happened in the postseason, you can safely bet the play call wouldn’t be that.

Reid had reason to be critiqued about his conservative nature in regular-season games — but it can no longer be questioned. Reid played his cards perfectly in 2019-20 and set up his best calls to be in the most significant situations.

His execution of the plan earned him his first Super Bowl ring. With that milestone achieved and his offense having continuity heading into 2020, Reid could be wanting to experiment more than we’ve ever seen before.