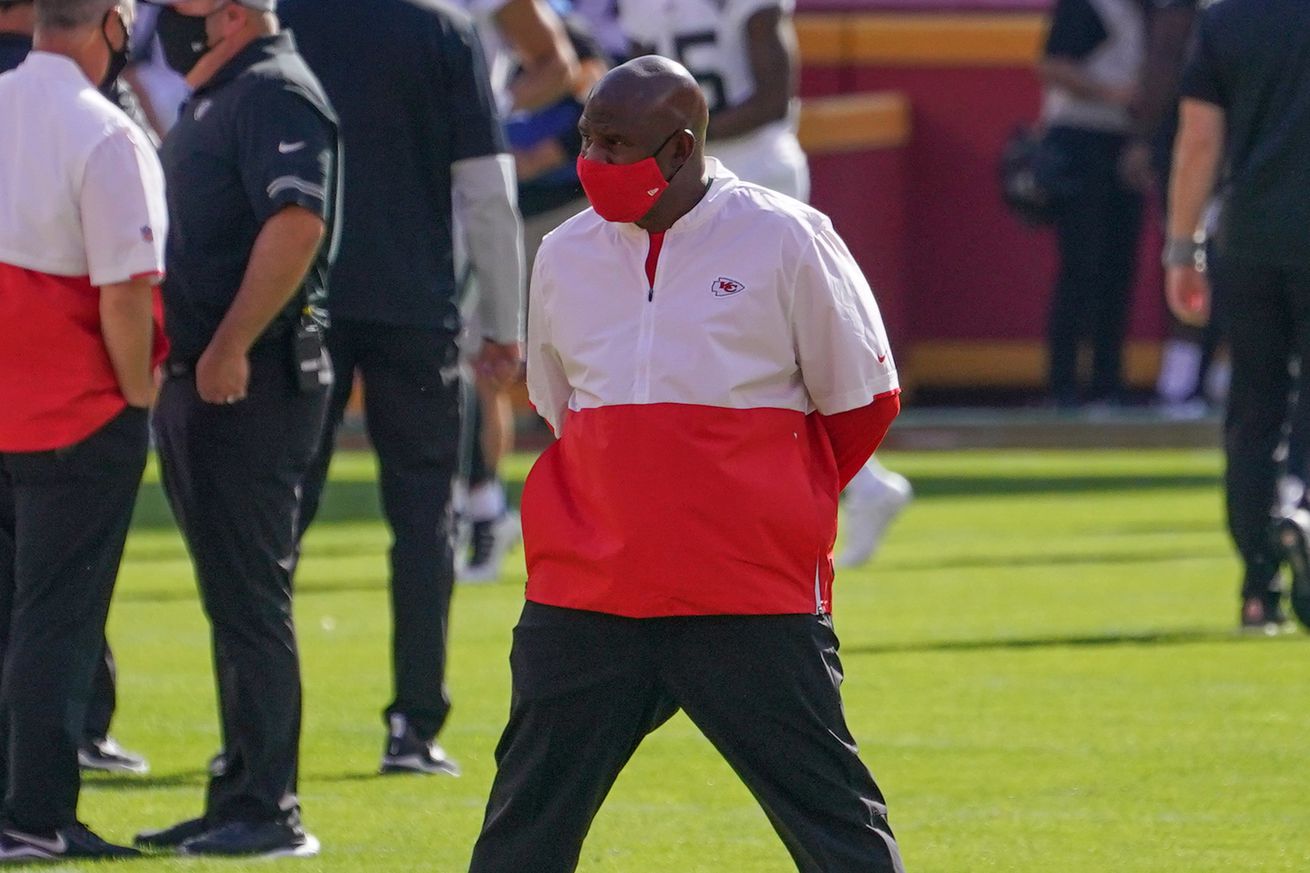 Bell won’t be available Monday against Buffalo, so perhaps we will get more from the OC next week.

The Kansas City Chiefs announced the signing of running back Le’Veon Bell on Thursday evening — yet on Friday, the team’s offensive coordinator was not ready to talk about it.

“I know there has been some discussion about a particular player,” said Bieniemy, acknowledging the signing in his opening statement. “I’m going to defer those questions to coach (Andy Reid) and (general manager) Brett Veach because right now our focus as a team — we’re focused on the Buffalo Bills. We’ve got to get this chip off our shoulder and make sure we go out and play up to expectation.”

It is understandable why the Chiefs’ offensive coordinator may be hesitant to address the Chiefs’ new weapon. With the Monday game, Reid won’t take his turn at the podium until Saturday afternoon — and it is well known that the Chiefs already have a starting running back.

And he’s right. Through five games of his NFL career, the 2020 first-rounder has compiled 344 rushing yards on 81 attempts (4.2 yards per attempt) and 17 receptions for 169 yards. At that pace, Edwards-Helaire would finish with more than 1,600 scrimmage yards at season’s end.

There have been problems inside the 10-yard line, where the rookie has 10 attempts for a total of a loss of a yard. It hasn’t been all his fault — play-calling and poor run blocking factor in as well — but the numbers are obviously not good.

Enter Bell — one of the best goal-line backs the league has to offer.

But the Chiefs won’t have Bell Monday night. Per league rules, the veteran back has to go through five days of COVID testing. It is thus entirely possible Bieniemy is putting the addition out of his head until it becomes “real,” as Reid likes to say. In a coach’s mind, that moment is when the player can actually take the field.

On the other hand, Chiefs defensive coordinator Steve Spagnuolo was willing to talk about the 6-foot-1, 225-pound elephant in the room. During a long career with several different teams, Spagnuolo has had to prepare and face Bell on five separate occasions.

“Look it — it’s great always to accumulate good football players, and I’ve got a lot of respect for Le’Veon Bell,” Spagnuolo said. “I haven’t seen him or gone against him in a long time, but I just remember him [being] a headache.”

Spagnuolo last faced Bell in 2016 as defensive coordinator of the New York Giants. Bell had 29 rushes for 118 yards and six receptions for 64 yards in a 24-14 Steelers victory.

“He was so challenging to stop in that, what we call dual-play that the Pittsburgh Steelers ran — where he would just sit back there and pick and weave. And no matter what you did it felt like you couldn’t stop him for less than six [or] seven yards, so a lot of respect for him. A good football player, and I’m sure our offensive guys over here will be really happy to have him.”

There is a case to be made that Bell — still arguably in the midst of his prime — may be able to help and enhance Edwards-Helaire’s growth. The Chiefs still have big plans for Edwards-Helaire, and are likely viewing the addition as solidifying a one-two punch — rather than any sort of replacement for the rookie.

“One thing I talked to Clyde about is just focusing on improving at something,” Bieniemy added. “Improving on three things per day. What are those three little things that you need to focus on that’s going to help you become the most productive player that’s possible? And those three things may repeat themselves throughout the course of the season, but I just want him to focus on the little things, because he’s a talented kid. He plays hard, he does a great job of reading the runs out, he’s done a heck of a job of understanding of what we’re doing in blitz protection and doing a good job of picking those up, and he’s done a heck of a job as a receiver out of the backfield.

“We just want to continue with his growth process. You got to understand: this is a rookie, and he just completed Week 5.”

And he will still be ‘the guy’ Week 6 against Buffalo — before Bell eases his way into the mix in Week 7. By then, the offensive coordinator should have more to say.