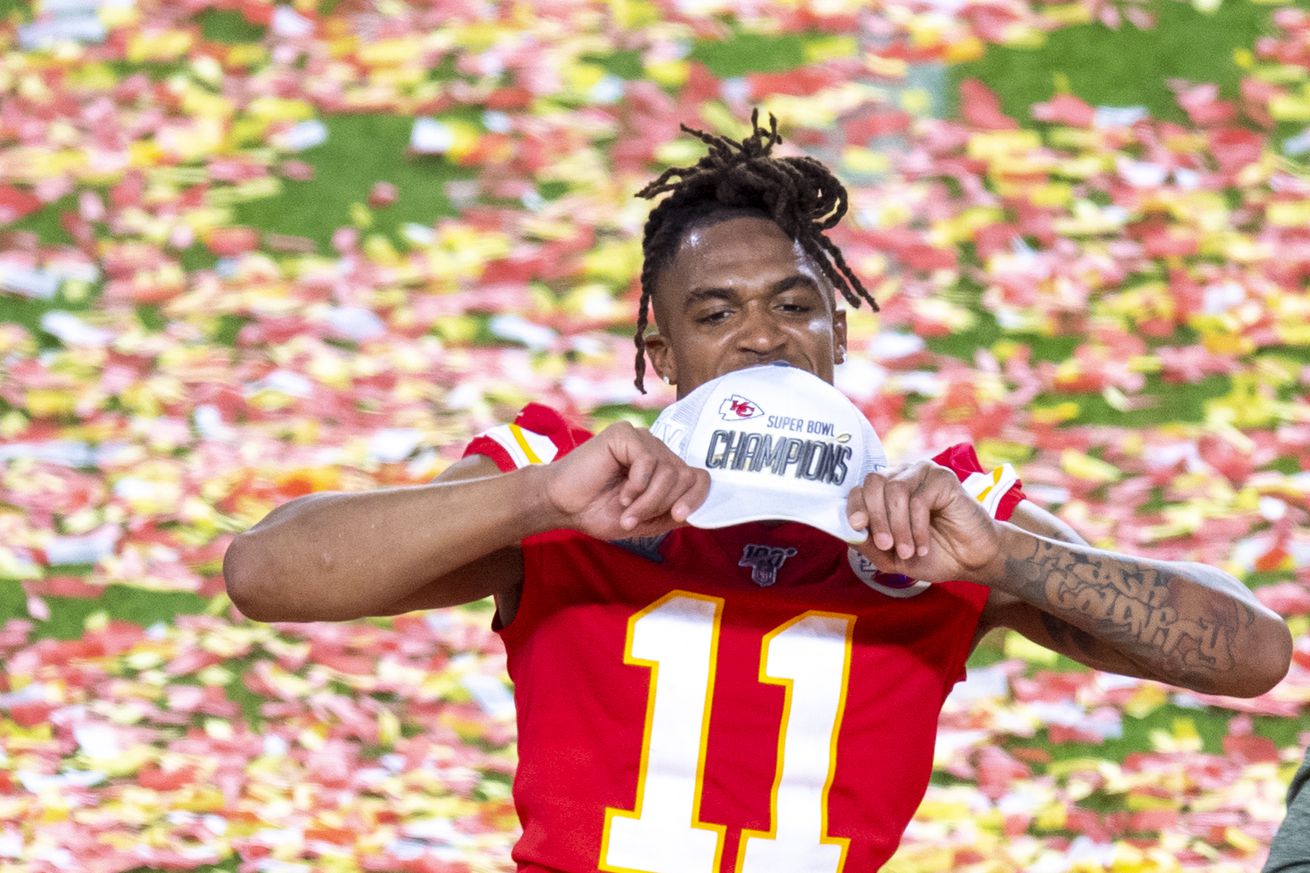 The Chiefs receiver’s championship aspirations are why he re-signed in Kansas City.

In his three seasons with the Kansas City Chiefs, wide receiver Demarcus Robinson has impressed with big plays when his number is called. In 2018, he caught quarterback Patrick Mahomes’ 50th touchdown pass of the season on an exciting, 89-yard play. Last year, he blew up for six catches, 172 receiving yards and two long scores in Week 2.

Even with these significant moments, he was fifth on the team in receiving yards last season, serving as a complement to the star pass-catchers with whom he shares the field. So when he hit free agency this offseason, most expected him to sign a multi-year deal elsewhere to become a more important piece of another team’s offense.

Instead, Robinson re-signed in Kansas City on a team-friendly, one-year contract for a minimal salary. On Sunday, the fifth-year wideout explained his decision to return.

“I wanted to come back here,” Robinson announced. “I don’t think there’s a lot for me to prove, I think they knew what I can do and we have a good understanding of what they want me to do here. I’m okay with doing what I have to do here to get to what I want to do next.”

While a bigger contract would usually be the motivation for a player coming off of his rookie deal, Robinson was fueled by the idea of further team success and how it would help him be remembered.

It sounds selfish on the surface — a player deciding where to play solely based on where he believes he’ll get another ring. It’s much deeper than that, and that’s proven by the relationship he has with his offensive teammates.

“We always get together and hang out,” Robinson said of his friendships in the wide receiver room. “Whether it’s at Pat’s house or at [tight end] Travis [Kelce]’s house, anyone’s house, we all just like to hang out. I think that brings you closer than just being on the field, working at work.”

Patrick Mahomes was in agreement on the special relationship the offensive skill players share. He touched on the great friendship while also telling reporters that he didn’t have to convince Robinson to come back to Kansas City.

Mahomes’ on-field relationship with Robinson is special. During the preseason of Mahomes’ rookie year, it became clear that he had developed a chemistry with the second-year wideout who hadn’t even recorded an official NFL statistic yet. They hooked up for huge plays, and those moments may have helped jump-start Robinson’s career.

Now, the two have an abundance of respect for each other. The quarterback known for his improvisation recognizes the benefit of that chemistry — and the fact that Robinson has outplayed the role he was given.

Head coach Andy Reid agrees with his quarterback on Robinson’s talent — and he expressed how important he is to an offense that demands versatility from their players.

“I’m a big fan of Demarcus Robinson,” Reid told reporters. “Demarcus could be a starter anywhere in the NFL and that’s the way we look at him… I think everyone has the utmost respect for -, he knows every position, he knows it from every personnel group, and the quarterback most of all has trust in him which becomes probably the most important thing.”

Even with as much praise as Robinson receives from his play-caller and the man throwing him the ball, he knows he has to keep working to continue executing the role he does for the Chiefs.

“We got a lot of elite guys and if you don’t work, you don’t eat,” Robinson stated, echoing the words of offensive coordinator Eric Bieniemy. “There’s another guy trying to come up and eat just like we all are, so you just have to stay on your grind no matter what happens.”

No one knows if there were significant offers from other teams for Robinson this offseason. Either way, he made the choice to take a salary less than what most expected him to make — but that doesn’t mean he isn’t motivated by money.

“I’m just trying to take care of my family. I want to win as many Super Bowls as I can, and in doing that, I want to make as much money as I can playing this game.”

He may not have seen a single pass thrown his way in Super Bowl LIV, but that doesn’t mean he won’t get a chance to make a clutch play the next time the Chiefs are in the Super Bowl. He understands that the more games he plays on football’s biggest stages, the stronger his legacy and reputation become.

Those opportunities will lead to bigger payouts down the road. For now, Robinson is content with his role — as long as it leads to another championship ring.