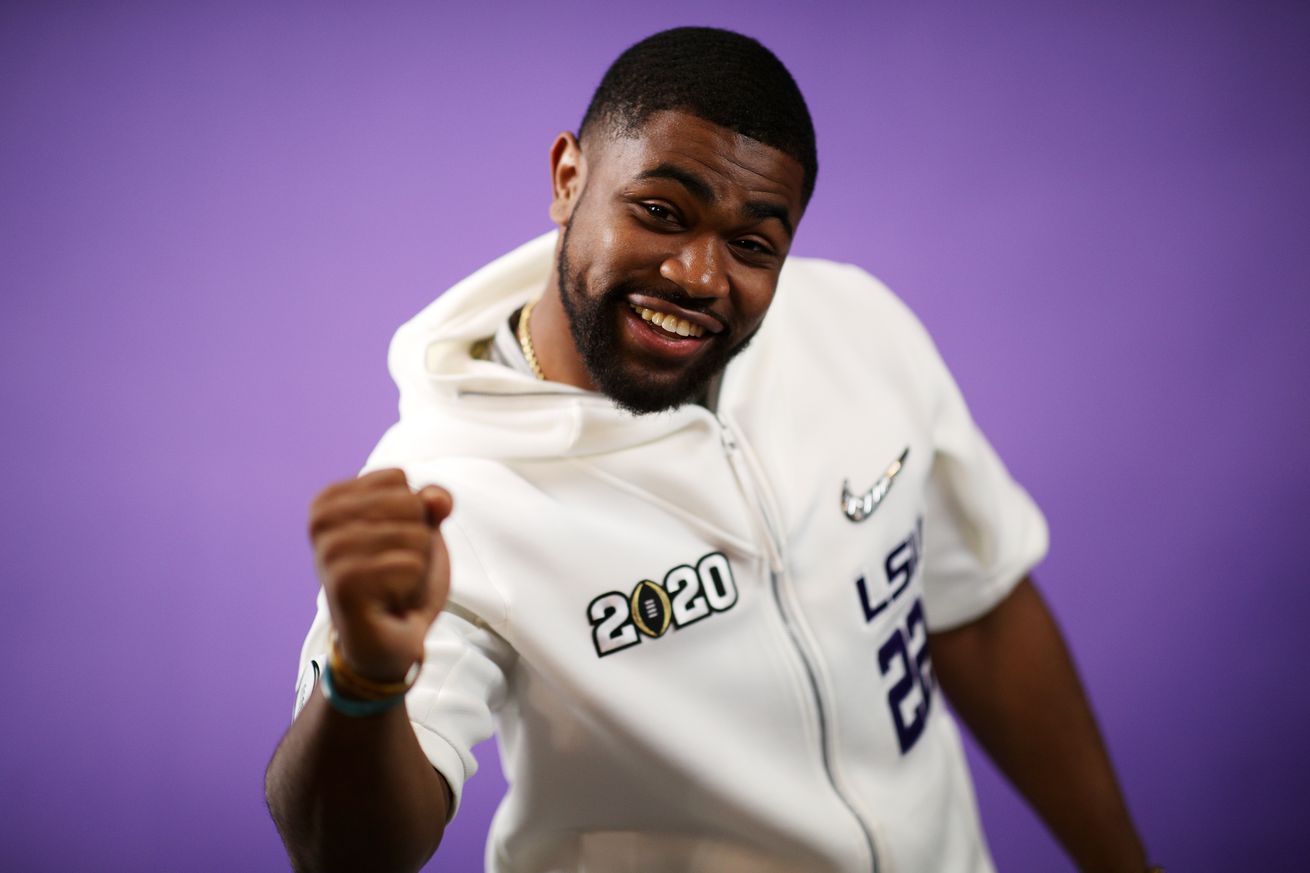 Kansas City selected the LSU running back with its first-round pick on Thursday night.

The Kansas City Chiefs’ Thursday night selection might have been a prelude to yet another chapter in the Andy Reid book of innovation. Despite many predicting that Kansas City would trade out of the first round to accumulate more picks, the team instead chose to keep the selection, taking LSU running back Clyde Edwards-Helaire at No. 32 overall.

As the Chiefs were on their Super Bowl run, Edwards-Helaire was an integral part of a Tigers team that went undefeated and won the national title.

“The guy kind of has the ability to play the game in slow motion.” – Brett Veach on Clyde Edwards-Helaire

“The kid, his interior running ability, just the vision and the instincts are just rare and unique,” said Chiefs general manager Brett Veach on a conference call Thursday night. “The guy kind of has the ability to play the game in slow motion. Lateral, agility, vision, his ability to start and stop and redirect his hands out of the backfield, some of those guys, one guy may have one trait, the other guy has another trait. We felt like he kind of had all of those traits.”

Veach explained that he and the personnel staff work all year to narrow the prospects down to a final list, which they share with Reid toward the end of the process for guidance.

“I give Coach a couple guys to take a peek on,” said Veach. “I told Coach, ‘Wait until you finish up your work on Clyde Edwards-Helaire. He’s going to remind you of Brian Westbrook.’ Coach called me back and said, ‘He’s better than Brian.’”

Yes, that Brian — the one who played for Reid for eight seasons in Philadelphia and started 90 games during a nine-year career, accumulating more than 10,000 yards from scrimmage in the process.

Westbrook could run the football, but his passing numbers were just as good — he had a stretch in his career where he caught more than 60 passes four seasons in a row. Between Kareem Hunt and more recently, Damien Williams, Reid has demonstrated in Kansas City that he favors a running back who can do both.

we gotta get chris berman to narrate clyde edwards-helaire’s highlight tape bc there are a LOT of WHOOP! moments pic.twitter.com/WuQxTZY1xO

“Watching the Kansas City offense last year, they were big on getting the back out in space,” said Edwards-Helaire on a conference call. “Any checkdown, any way the back can get out and run a route, that’s where I absolutely did most of my damage as far as being in the passing game, and that’s what Kansas City is big on and that’s what the foundation is built on — being able to get the ball in space and spread the ball out.

“That makes defenses stressed. Being able to be a running back and catch the ball out of the backfield and run routes — I feel like everything is a perfect [mix].”

And he didn’t even mention Reid’s personal favorite — screen passes.

Along with the scheme fit comes familiarity. When Edwards-Helaire was a freshman at LSU, he had current Chiefs running back Darrel Williams to guide him as he learned a complex Tigers offense.

Williams and Edwards-Helaire remained friends after Williams left and joined the Chiefs as an undrafted free agent in 2018. Edwards-Helaire said Williams was the first person to contact him when he was drafted on Thursday night.

In addition to Williams, Edwards-Helaire also looked up to current Washington Redskins running back Derrius Guice, who played with him at LSU and prior to college at Catholic High School in Baton Rouge.

Skill-position players who join the Chiefs will often talk about the steep learning curve that comes with Reid’s playbook. It is positionless in a sense. Every player — running back, tight end or wide receiver — must learn every position along the line of scrimmage, thereby providing Reid with a wide variety of options and playcalls.

Sometimes, it takes years for a player to get comfortable. But the Chiefs don’t feel that will be the case when it comes to Edwards-Helaire.

“He’s going to come in right away and pick up this offense quickly,” said Veach. “I always worry about the complexity of our offense and just about how long it will take guys, when the coaches feel comfortable, but everyone that you talk to at LSU, they rave about his football character and his football IQ. And then you throw in the talent that he has with that. We think he can come in right away and be a big factor in this offense.”

The high praise continued throughout the conference call, and at one point, Veach went as far as to call Edwards-Helaire a “franchise-type running back.”

The Chiefs were fielding calls on potential trades until the Green Bay Packers landed the 26th overall pick to take quarterback Jordan Love. Then, Veach said, the rings from the phone quieted.

Veach almost made it sound as if the silence provided him and Kansas City’s personnel staff a sense of relief — with no deals on the table, the Chiefs were free to take who they felt was the best player available — and that was Edwards-Helaire.

In 2017, Reid led Alex Smith to his best season thanks to an RPO revolution that tapped back into the strengths of his college days. Over the past two seasons, Reid has formulated “Pat plays” — unique ways to provide Patrick Mahomes the freedom to play out of structure. The hybrid of organization and non-organization led the Chiefs to the Super Bowl.

The Chiefs’ offensive weapons now consist of several of the fastest receivers in the game in Tyreek Hill, Mecole Hardman and Sammy Watkins. Travis Kelce is a wide receiver in a tight end’s body. What the addition of Edwards-Hellaire may allow Reid to do is create packages in which he can truly line up any player at any position at any time — without the thought of substitutions. Purely positionless.

Edwards-Hellaire may not be a three-down back anywhere else in the league. But this is Kansas City, and much like Mahomes, Reid and Veach picked him.

“I think because of the type of offense that we are, I do [think he could be a feature back],” Veach said. “I think if we were a more traditional two- tight end set, power run game, certainly there would be some questions. But I think the way we can spread teams out and make them play east and west, and the threat of our vertical passing game, and again, this kid’s low center of gravity, his ability to make people miss.

“I think just the way our offense is constructed I think this guy will thrive in it and I think he’ll be able to handle the workload.”