The Kansas City Chiefs shuffled some staff positions in the offseason after the Super Bowl, moving 2020 receivers coach Greg Lewis to work with the running backs, and promoting Bleymaier to fill his absence. The veteran assistant coach has a big chance to make a name for himself on Kansas City’s talented offensive coaching staff.

After a roller-coaster preseason game for the Chiefs’ pass-catchers against the Cardinals, it seemed fitting to reflect on comments Bleymaier made to the media last week ahead of the matchup in Arizona. He emphasized the importance of having the aforementioned Lewis around for input and said he was settling into his new job well.

“It’s a little unique with Greg (Lewis) still being here,” Bleymaier said of his counterpart. “I go to him daily for questions, advice, our guys go to him. I’m the new receiver coach, but we kind of just gained an extra receiver coach because Greg is still there, and the guys feel free to go talk to him as well. So it’s been seamless at least for me.”

That relationship and sort of mentorship from the newly-minted running backs coach could be a difference-maker for Kansas City, as the team’s receivers flourished under his leadership since 2017. Both coaches are former receivers themselves, and their experience in uniform has paid dividends for the Chiefs in crucial situations in the past.

Bleymaier has become known for what Andy Reid calls the “Joe Files.” A collection of plays from all over the world of football that help the Chiefs adapt and innovate on offense. Bleymaier deflected praise about his creativity to the press but told the media that he and the other coaches are always looking for an extra edge.

“We try to find plays from anywhere in the country,” Bleymaier told reporters. “And when we find something that has been successful, if it’s not something we currently have in, then either we try to copy it straight up and put it in or we see how it can fit. If something is working, we’re all about putting guys in the best position to succeed. If there’s a concept or a way to do that that we don’t currently have in, Coach is not afraid to add it. So that’s the great thing about him, our offensive staff, our offense and the guys we have. They’re eager to get more and more and more and have more on their plate in order to showcase their abilities.”

That commitment to fresh ideas was on full display against the Cardinals on Friday, though the offense struggled through miscommunication issues early. Receivers were getting open, gaining separation on various routes routinely.

Bleymaier is sure to be coming up with solutions ahead of the season to aid in correcting the miscommunications. He told the media last week that the short shelf life of successful schemes and concepts keeps him on his toes, and forces him to keep pushing the envelope.

“With the defenses in this league, anything that’s on film for two, three weeks that’s successful, they’ll have an answer for,” Bleymaier said. “So, we’re looking out constantly, weekly for what just got ran yesterday, what just got ran in college the week before, what’s something maybe the defense hasn’t seen yet or maybe the defense we’re facing that week hasn’t seen yet because part of it is also the element of surprise. I would say it’s a weekly type situation where it’s like we don’t have this, we saw it, let’s get it going before the league has an answer for it.”

Life on the cutting edge of offensive genius is second nature for assistants under Andy Reid, so it is no surprise Bleymaier is settling in and getting comfortable. If he can coax even a little more production out of Chiefs’ receivers than was achieved last season, this offense could be nearly unstoppable through the regular season.

4 standouts on offense from Chiefs’ preseason win over Cardinals 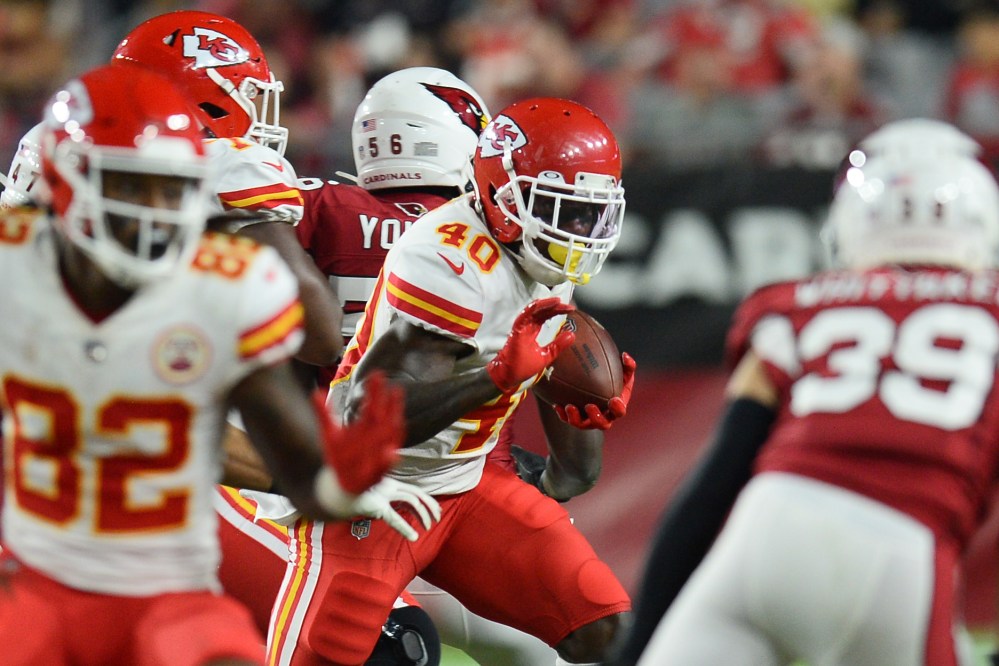