The Chiefs intend to sign veteran offensive lineman Daniel Kilgore, as Terez A. Paylor of Yahoo Sports reports (via Twitter). Kilgore, 32, is about to enter his 10th season in the NFL. 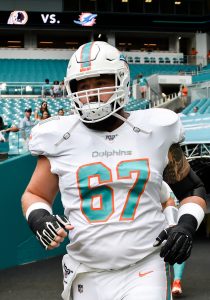 The Appalachian State product was selected by the 49ers in the fifth round of the 2011 draft. It took him until the 2014 season to record his first career start, and then he ran into some tough injury luck, sustaining a broken leg that wiped out a good portion of his 2014-15 seasons.

He battled back to start 13 games at center in 2016 and a full 16-game slate in 2017. The advanced metrics have never been high on his work, but the 49ers certainly liked him enough to keep him around for a number of years and even signed him to a three-year extension after the 2017 season, only to ship him to the Dolphins several months later.

But in 2018, his first season with the ‘Fins, Kilgore played in only four games due to a torn pec. Though he played in 13 contests (all starts) in 2019, Miami was not terribly impressed and declined his 2020 option, making him a free agent. The Chiefs are the first team with reported interest.

It’s presently unclear whether Kilgore will push incumbent Kansas City center Austin Reiter for playing time, or if he projects as more of a depth piece. Kilgore has played guard in his career as well, so he could back up that position in the wake of Laurent Duvernay-Tardif‘s decision to opt out. Of course, the club also signed Kelechi Osemele to help fill the void left by LDT.